The Melbourne Rebels started their 2019 Super Rugby campaign in superb fashion with a 34-27 win over the Brumbies in Canberra on Friday.

The Rebels dominated large periods of play and they outscored their opponents by five tries to four.

It was also a battle between two Wallaby flyhalves with Quade Cooper overshadowing Christian Lealiifano during the 80 minutes.

Cooper managed the game well and was a constant threat on attack. His distribution was excellent and he kept the Rebels’ defence guessing.

His tactical kicking was also on point.

The Brumbies opened the scoring with a Lealiifano penalty in the fourth minute of the game.

The first try of the game came in the 13th minute when Brumbies hooker Folau Fainga’a dived over the Rebels’ tryline off the back of a powerful driving maul. Lealiifano added the extra two points with the conversion for a 10-0 score.

The Rebels hit back almost immediately when Tom English crashed over for a try after a sweeping attack which originated from Will Genia’s vision. Cooper missed the conversion.

Brumbies centre Irae Simone then had a brain explosion when his misdirected kick gave the ball to Rebels wing Jack Maddocks to sprint in for an easy try, which Cooper converted to give the Rebels the lead after 23 minutes.

That lead was short-lived when Brumbies lock Rory Arnold launched himself over a ruck to dot the ball down for a try after some sustained pressure in the Rebels’ 22.

The lead changed hands once again in the 32nd minute and then again in 35th minute.

First Rebels lock Matt Philip crashed over for a try after some relentless pressure in the Brumbies’ half. Cooper added the extras with the conversion.

Then it was the Brumbies turn to hit back when Brumbies prop Allan Alaalatoa bulldozed his way over for try, which Lealiifano converted.

At half-time the Brumbies were leading 22-19.

The Rebels nearly made the perfect start in the second half when a long pass from Genia from the back scrum found Maddocks into space to run in for a try. However, on closer inspection, Genia’s pass was forward and the try was disallowed.

The visitors eventually got their fourth try when hooker Anaru Rangi ran onto a ball with pace to crash his way over for a five-pointer. Cooper added the extra two points.

English had a great opportunity to extend his team’s lead in the 65th minute, but he lost the ball forward few metres from the tryline with the help from Tevita Kuridrani.

With just over ten minutes left on the clock Cooper landed a long-range penalty, which gave his team a seven-point lead.

Cooper had another opportunity to extend his team’s lead in the 72nd minute, but the Wallaby flyhalf pushed his kick wide from distance.

It didn’t really matter as moments later Maddocks was over for his second try after collecting Billy Meakes’ kick-pass to dive over for the score in spectacular fashion.

The Brumbies did not give up and they ensured a thrilling final few minutes when Sam Carter went over for a try from a driving maul in the 78th minute. Lealiifano could not convert.

The home side had one final attack to try and salvage a draw, but it was not to be as the Rebels walked away with the win and some valuable log points in the Australian Conference

Man of the Match: Will Genia showed his class with his distribution, while Jack Maddocks proved once again what a lethal finisher he is with two tries. However, the award goes to flyhalf Quade Cooper who put in a great all-round performance in Canberra, 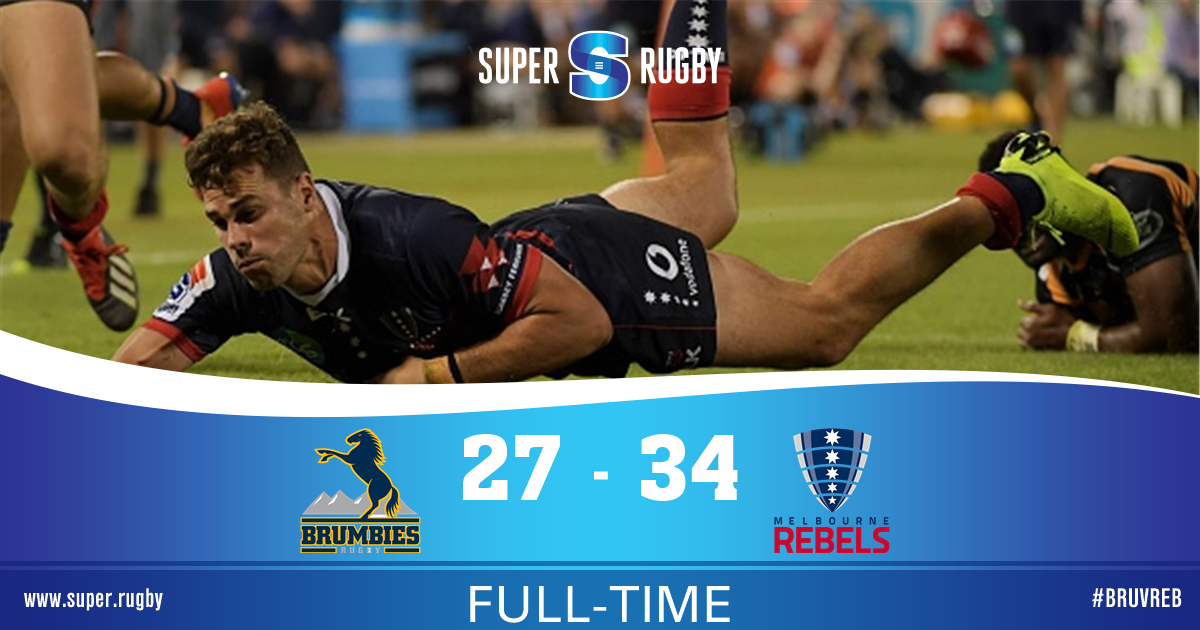