Cooper stars as Rebels hang on to beat Highlanders

The Rebels picked up their second win of the Super Rugby season with a gritty 24-19 win over the Highlanders in Perth on Friday.

The visitors started with a bang at the AMI Stadium, with flanker Shannon Frizell grabbing a superb cross kick then holding off Wallaby scrum-half Will Genia to crash over the whitewash in the second minute.

But the hosts bounced back within minutes thanks to a planned move involving Dane Haylett-Petty. The fullback got the ball off the back of the scrum, took a hit and shovelled it onto centre Tom English who had an easy run in.

A Highlanders try from a textbook rolling maul was quickly cancelled out thanks to some magic from Quade Cooper. The Wallaby number ten was upended in a tackle but still produced a stunning offload to put Jack Maddocks in a gap.

After Cooper converted the try, the Rebels further extended their advantage thanks to some slick backline play. Centre Bill Meakes shot an inside ball to English, who’s pace saw him cross the line for a first half brace. Heading down the tunnel 19-12 at half-time, the hosts were certainly the happier team.

Early in the second stanza, Cooper was again instrumental as Meakes chased down an accurate grubber and scored the Rebels’ bonus point try.

After a messy period, Highlanders fought their way back into the contest by keeping it tight amongst the forwards, with lock Jackson Hemopo eventually securing the five-pointer with 16 minutes to play.

Trailing by five, the Highlanders threw everything at a staunch Rebels defence, even getting across the line but the ball was judged to have been knocked on by the television match official. With just seconds left, the Rebels hung on and hoofed the ball out at the hooter to celebrate their second consecutive win of the season. 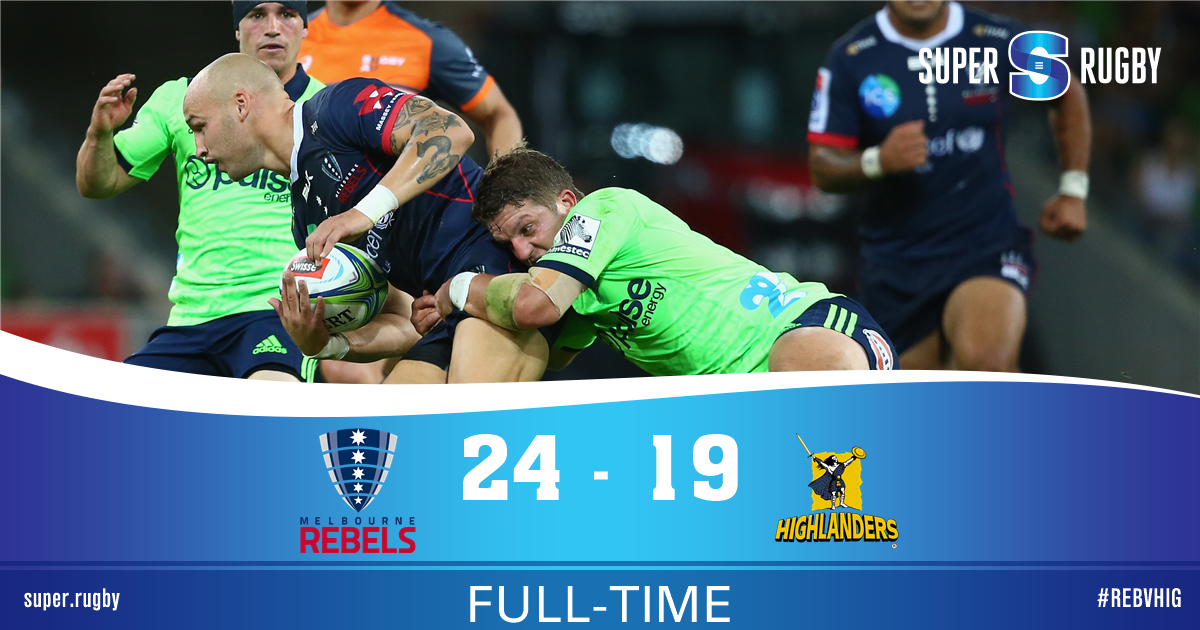