The Chiefs battled back from 20 points down to defeat defending champions Crusaders 40-27 in a thrilling match in Suva, Fiji.

This unlikely result keeps them in the hunt for the Super Rugby play-off spots as tries from Solomona Alaimalo, Samisoni Taukei’aho, Jesse Parete, Brad Weber, Shaun Stevenson and Tumua Manu saw them to the win. Jack Debreczeni added 10 points off the tee at a packed out ANZ National Stadium.

It was a thrilling first half in Fiji as the Crusaders shot out of the blocks to lead 20-0 before the Chiefs fought back to go in just one point behind at 20-19.

Mo’unga got the ball rolling for the champions with three points on 10 minutes before a fumble near halfway from Atu Moli was collected by Ryan Crotty who found Barrett on his shoulder. The second-row showed good pace and a strong fed to race over as the Crusaders went 10-0 up.

There were worrying signs for the Chiefs at this point as they were dropping off tackles at will and the Crusaders were in no mood to take their foot off the gas. Next it was Drummond who darted over following a smart dummy, this after a driving maul had been brought to ground.

15-0 became 20-0 five minutes later as Ennor’s mazy run across field near to his 22 led to a line break and he found Reece who cruised in, much to the delight of the Fijian crowd.

Somehow the Chiefs regrouped from that point on and the fightback was started by Alaimalo as he ran in from range after collecting a smart offload from Tyler Ardron on the ground. Taukei’aho and Parete would also cross before the break to cap a remarkable, quick-fire, response.

The Chiefs would not have wanted the break at that point and unfortunately for them the Crusaders regrouped as quick hands sent Ennor over. However, the Chiefs did respond on 47 minutes as Angus Ta’avao’s offload found Weber for their fourth try, making it 27-26 to the Crusaders.

Ta’avao would go agonisingly close to nudging the Chiefs ahead for the first time in the game but was adjudged to have lost control of the ball near to the line. However, Stevenson succeeded where his prop failed when he raced under the posts from 45 metres out, with the Chiefs now leading 33-27.

Colin Cooper’s charges were unsuccessful in extending that lead via the tee through Debreczeni on 77 minutes but it mattered not as the resulting short restart from Mo’unga was gathered by replacement Manu, who coasted over to wrap up a remarkable come-from-behind triumph. 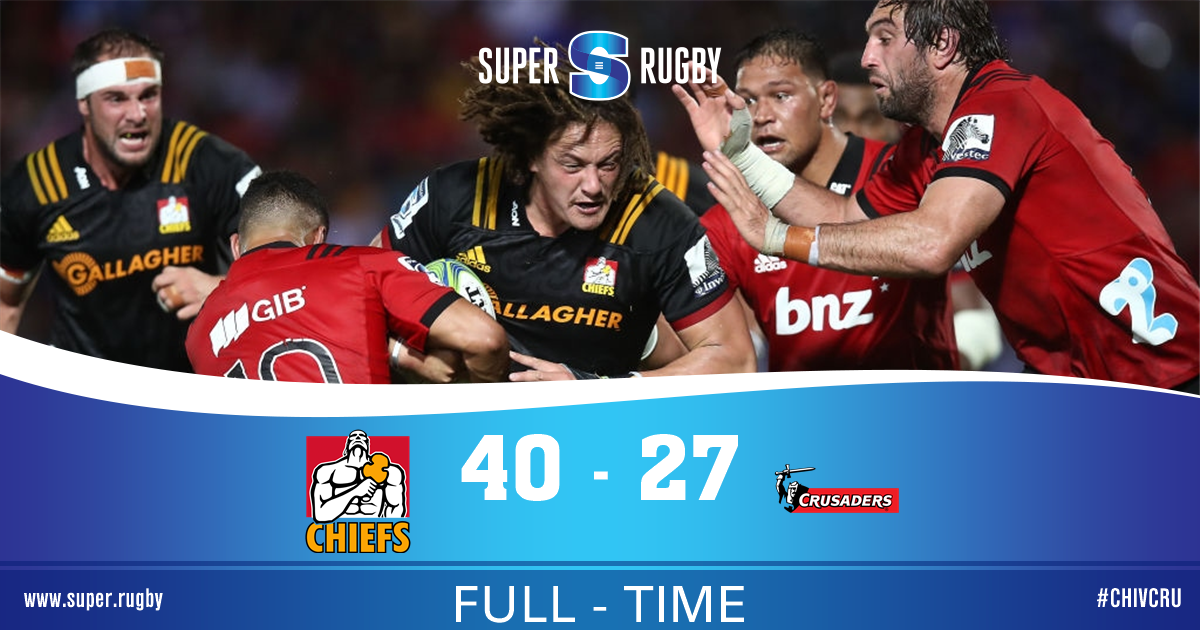