The Crusaders were given an almighty scare by the Waratahs before securing a hard-fought 31-29 win in their Super Rugby clash in Christchurch on Saturday.

The home side had to dig deep after the Waratahs made a terrific start when they raced in to a 29-0 lead by the half-hour mark thanks to tries from Cam Clark, Taqele Naiyaravoro, Israel Folau and Curtis Rona.

But the Crusaders showed their class as they fought back and Joe Moody, Codie Taylor, Seta Tamanivalu and Braydon Ennor all crossed for tries which helped them secure the win which sees them return to the top of the New Zealand Conference and the overall standings.

The visitors opened the scoring in stunning fashion in the fourth minute when Clark rounded off a flowing move in the right-hand corner after Bernard Foley and Kurtley Beale played prominent roled in the build-up.

Foley failed with his conversion attempt before slotting a penalty in the 13th minute after Bryn Hall was blown up for not rolling away at a ruck.

The Crusaders tried to fightback but were dealt another blow five minutes later when Naiyaravoro intercepted a pass from Richie Mo’unga on the Crusaders’ 10-metre line before racing away to score his side’s second try.

That try boosted the visitors’ confidence and in the 23rd minute Folau left his stamp on this match. After gathering a high kick spectacularly just inside his half, Folau and glided through a gap in the home side’s defence and was soon close to their 22. He then traded passes with Beale before crossing in the left-hand corner despite a desperate cover tackle from George Bridge.

And in the 28th minute, Folau gathered a poor clearance kick from Bridge before taking the ball deep into the home side’s 22. He tried to get a pass out to to Naiyaravoro but the ball was knocked backwards by Bridge before Rona gathered on his way over the try-line.

Foley converted both those tries which meant his side were leading 29-0 and although the Crusaders seemed shellshocked, it was not long before they started their fightback.

In the 35th minute, Mo’unga stepped past a couple of defenders before offloading to Moody, who crossed for the home side’s first try.

Mo’unga added the extras and in the 38th minute the champions were rewarded with their second try when Taylor crashed over from close quarters off the back of a lineout drive deep inside Waratahs territory.

The visitors were then reduced to 14 men when Nick Phipps was yellow carded for a cynical foul on defence close to his try-line and the Crusaders made full use of their numerical advantage by striking out wide where Tamanivalu rounded off in the right-hand corner.

Mo’unga added the conversion which meant the home side were back in the game with the Waratahs leading 29-19 at half-time.

The champions continued to dominate after the break and were given another shot in the arm in the 53rd minute when Naiyaravoro was also sent to the sin bin for a deliberate knock on.

The Crusaders piled on the pressure and were rewarded three minutes later when Ennor went over in the left-hand corner for a deserve try. Mo'unga's conversion attempt was off target but the home side continued to pile on the pressure and spent large periods camped in their opponents' half.

And they reaped further reward in the 68th minute when referee Ben O'Keeffe awarded them a penalty try after the Waratahs were penalised for several scrum infirngements close to their try-line.

That gave the Crusaders the lead for the first time in the game and they held onto it until the end. 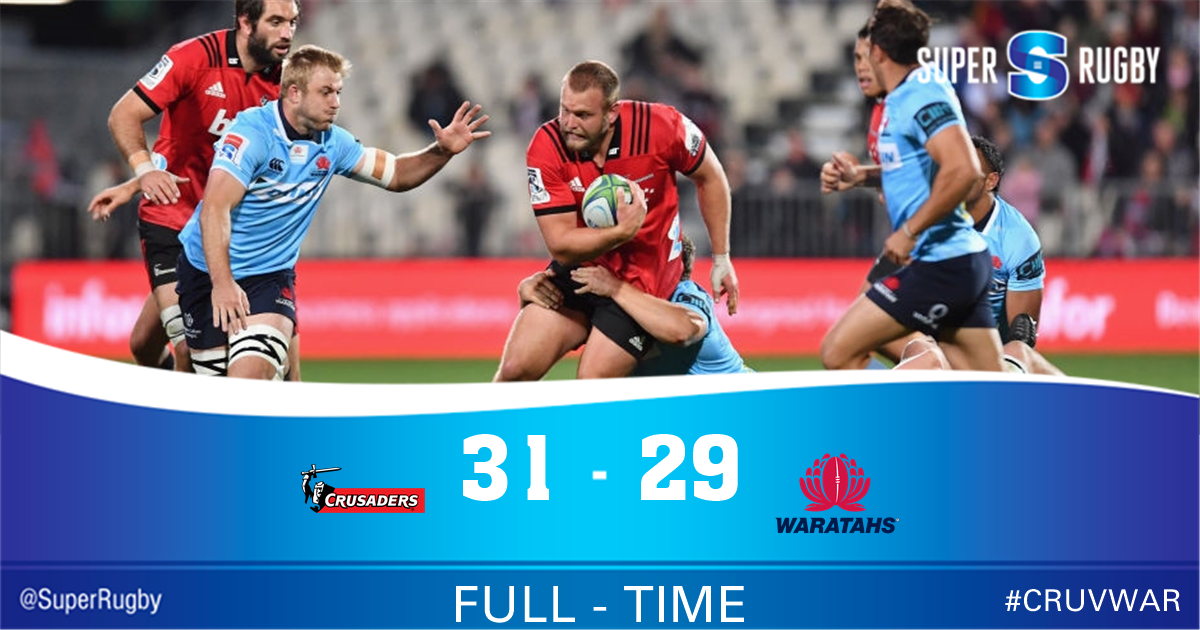