The Crusaders moved 13 points clear at the New Zealand Conference summit after edging the Blues 19-11 in a stop-start contest at Christchurch Stadium.

It was a match low on entertainment but the champions once again showed their ability to win even when not performing at their best.

Bryn Hall claimed their only try of the contest, coming in the first period, while Richie Mo’unga landed 14 points off the tee for his team. Rieko Ioane replied with a try while Harry Plummer kicked six points as the Blues stay rooted at the bottom of the Conference.

The first-half was a fairly one-sided affair as the Crusaders dominated up front, enjoying 64% of the territory as they starved the Blues of possession. The visitors could not get their hands on the ball as the reigning champions played smart percentage rugby.

The Crusaders opened the scoring on nine minutes when hands in the ruck from Jonathan Ruru allowed Mo’unga to step up and make it a 3-0 lead. That was doubled seven minutes later as the Blues committed the same offence, with Mo’unga successful again.

The hosts were well on top at this stage, so it came as no surprise when they crossed on 20 minutes, Mo’unga’s clever chip kick ahead being collected by centre Ryan Crotty who fed Hall for the run-in. With the conversion, Scott Robertson’s side were cruising 13-0 up.

There was some brief respite for the Blues when Plummer landed three points after Matt Todd was pinged for going off his feet after 23 minutes, but that proved to be the final points of the half, as the Crusaders went close via George Bridge with a scoring opportunity wide out.

Bridge was then denied a try three minutes into the second 40 due to an earlier knock-on from Sevu Reece, chalking off a slick kick pass. Shortly afterwards, the Crusaders missed a chance of extending their lead off the tee, Mo’unga going wide after Whetu Douglas pounced at a ruck.

The Crusaders continued to push and probe and were unlucky not to cross when Mo’unga seemed to be tackled high by Melani Nanai before attempting to ground the ball on the whitewash on the left. However, referee Mike Fraser was happy the contact was legal.

Against the run of play, it was the Blues who opened the second-half scoring via Plummer's boot, after the hosts did not roll away. However, Mo’unga soon made it 16-6 after the Blues were pinged for being in front of a clearing kick.

It was game on though with 10 minutes remaining when winger Rieko Ioane crossed on the left following excellent handling from Nanai, making it a five-point ball game in the closing stages.

But the Blues’ hopes were short-lived as ill discipline allowed Mo’unga to make it 19-11 with his fourth penalty kick of the match, denying the visitors even a losing bonus-point for their efforts. 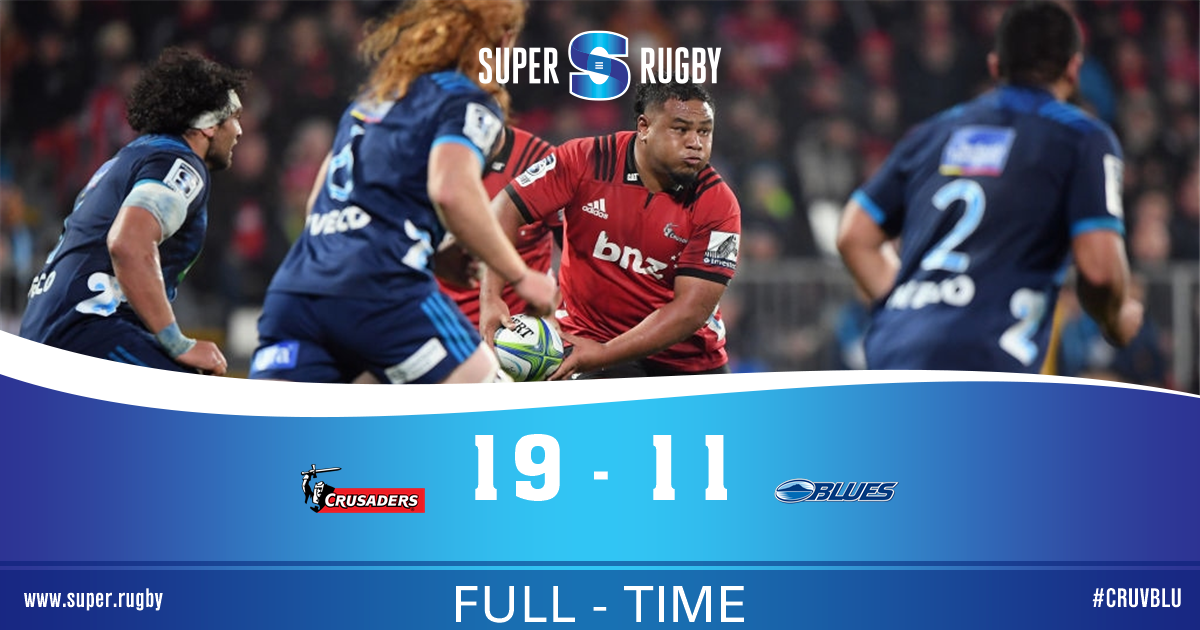