Crusaders cruise to victory over Waratahs

The Crusaders made a statement of intent as they thumped the Waratahs 43-25 in their Super Rugby opener in Nelson on Saturday.

Although the Waratahs were competitive in patches, the defending champions dominated for long periods and eventually outscored their opponents by six tries to three.

Braydon Ennor and Will Jordan led the way with a brace of tries apiece while their other five-pointers were scored by Leicester Faingaanuku and Luke Romano, with David Havili finishing with a 13-point haul courtesy of five conversions and a penalty.

For the Waratahs, Mark Nawaqanitawase scored two tries and Alex Newsome also crossed the whitewash, while Will Harrison slotted two penalties and a conversion.

The opening exchanges were tightly contested and the sides were deadlocked at 3-3 by the 13th minute after Havili and Harrison exchanged penalties. Soon after, Jordan crossed for his first try before Ennor found himself in space in the 26th minute and he showed a superb turn of speed before dotting down under the posts.

Five minutes before half-time, the champions extended their lead when Faingaanuku gathered a high ball from Richie Mo’unga close to the halfway mark before busting through three defenders on his way over the try-line.

Havili added the extras and had a chance to extend his side’s lead when he lined up a penalty from in front of the posts on the stroke of half-time, but his effort was off target and the teams changed sides at the interval with the Crusaders leading 24-6.

The Waratahs came out firing after the break and in the 53rd minute, debutant Nawaqanitawase beat Jordan before diving over in spectacular fashion in the left-hand corner for his first Super Rugby try.

Shortly afterwards, the 19-year-old intercepted a wayward pass from Whetu Douglas just inside the Crusaders’ half and raced away to score his second try. Harrison’s conversion attempt struck an upright which meant the visitors were back in the game with the Crusaders holding a slender 24-18 lead.

The champions did not panic, however, and regained the initiative courtesy of further tries from Ennor and Jordan in quick succession. Jordan’s effort was particularly impressive as he did well to outpace the cover defence after gathering a cheeky offload from Codie Taylor.

The Crusaders hammered home their dominance when Romano crashed over from close quarters in the 75th minute before Newsome scored a consolation try for the visitors in the game’s closing stages. 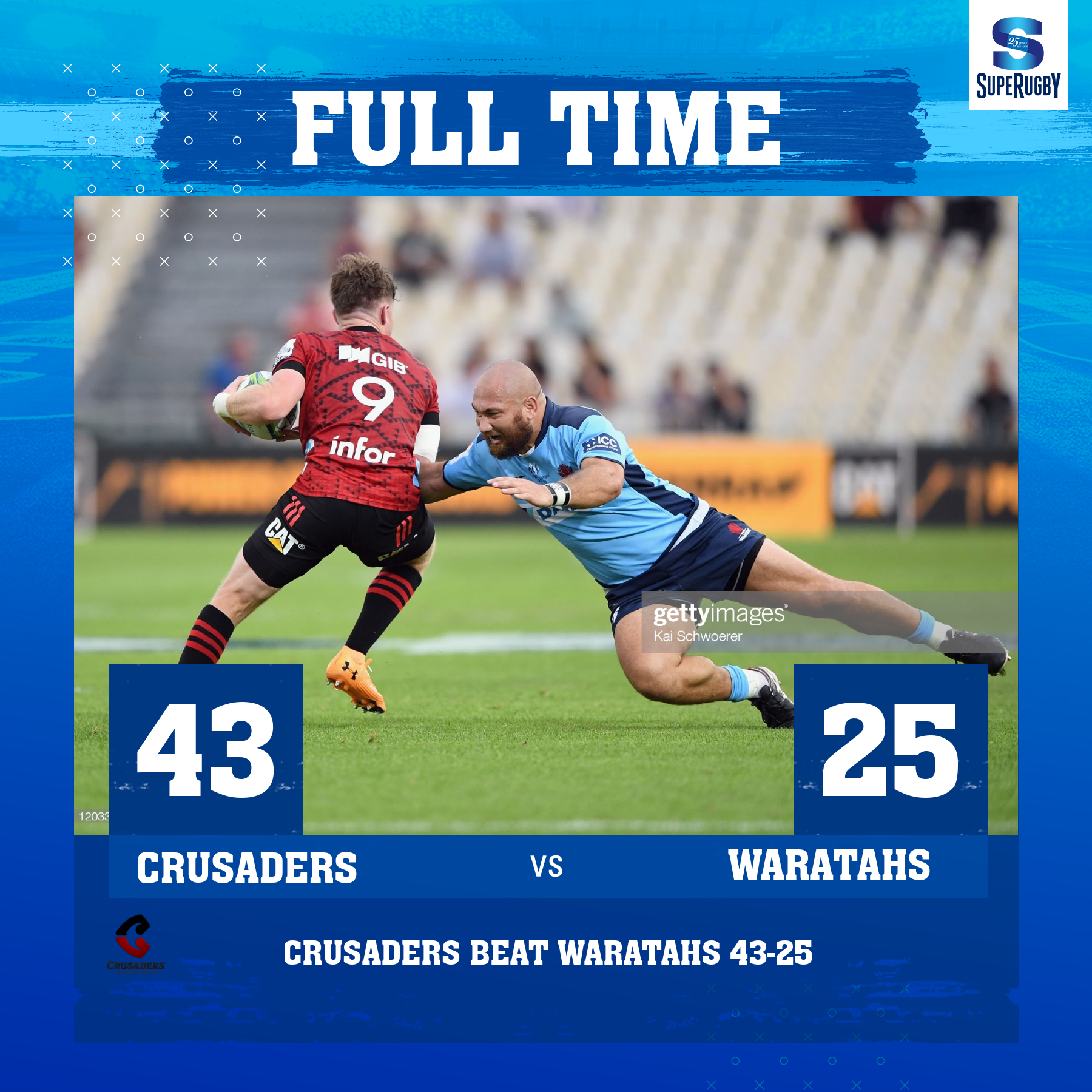