The Crusaders ran out to a 33-13 bonus-point victory in Friday's Super Rugby Derby against the Highlanders in Christchurch.

In a fast-paced and entertaining encounter, four first half tries from Codie Taylor, Tom Christie, Braydon Ennor and George Bridge set the Crusaders on the path to victory, although they went off the boil in the second half when the Highlanders launched a mini fightback.

The 10-time champions finished stronger, however, and sealed their win when Sione Havili crossed for their fifth try with their other points coming courtesy of conversions from David Havili, Bryn Hall (2) and Mitchell Drummond.

For the Highlanders, Michael Collins and Jona Nareki scored tries and Josh Ioane added a penalty.

The Highlanders were fastest out of the blocks and thought they had taken the lead in the fifth minute when James Lentjes crossed the whitewash but he lost control of the ball and his effort was disallowed. The Crusaders strayed offside in the build-up and Ioane opened the visitors’ account by slotting the resulting penalty.

The home side took control of proceedings shortly afterwards and were rewarded in the 14th minute when Taylor scored the opening try after running onto a pass from Bridge close to the Highlanders’ try-line.

Midway through the half, Christie got his name onto the scoresheet when he gathered a pass from Jack Goodhue deep inside Highlanders territory and five minutes later Ennor showed a superb turn of speed before he also crossed the whitewash.

To their credit, the Highlanders did not panic and struck back when Collins went over in the left-hand corner after Rob Thompson and Nareki combined brilliantly in the build-up.

That champions continued to dominate, however, and in the 32nd minute Bridge pounced on a loose ball inside the visitors’ 22 before crossing for a converted try which gave his team a 26-8 lead at half-time.

The Highlanders were much more competitive after the break and did well to contain the champions with a solid defensive effort during the first 20 minutes of the half.

The visitors held the upper-hand in the territorial and possession stakes during that period and narrowed the gap in the 63rd minute when Nareki crossed for their second try out wide.

That was the last time they would score points, however, and the Crusaders secured the result and the bonus point in the 74th minute when Havili scored off the back of a lineout drive inside the Highlanders’ 22. 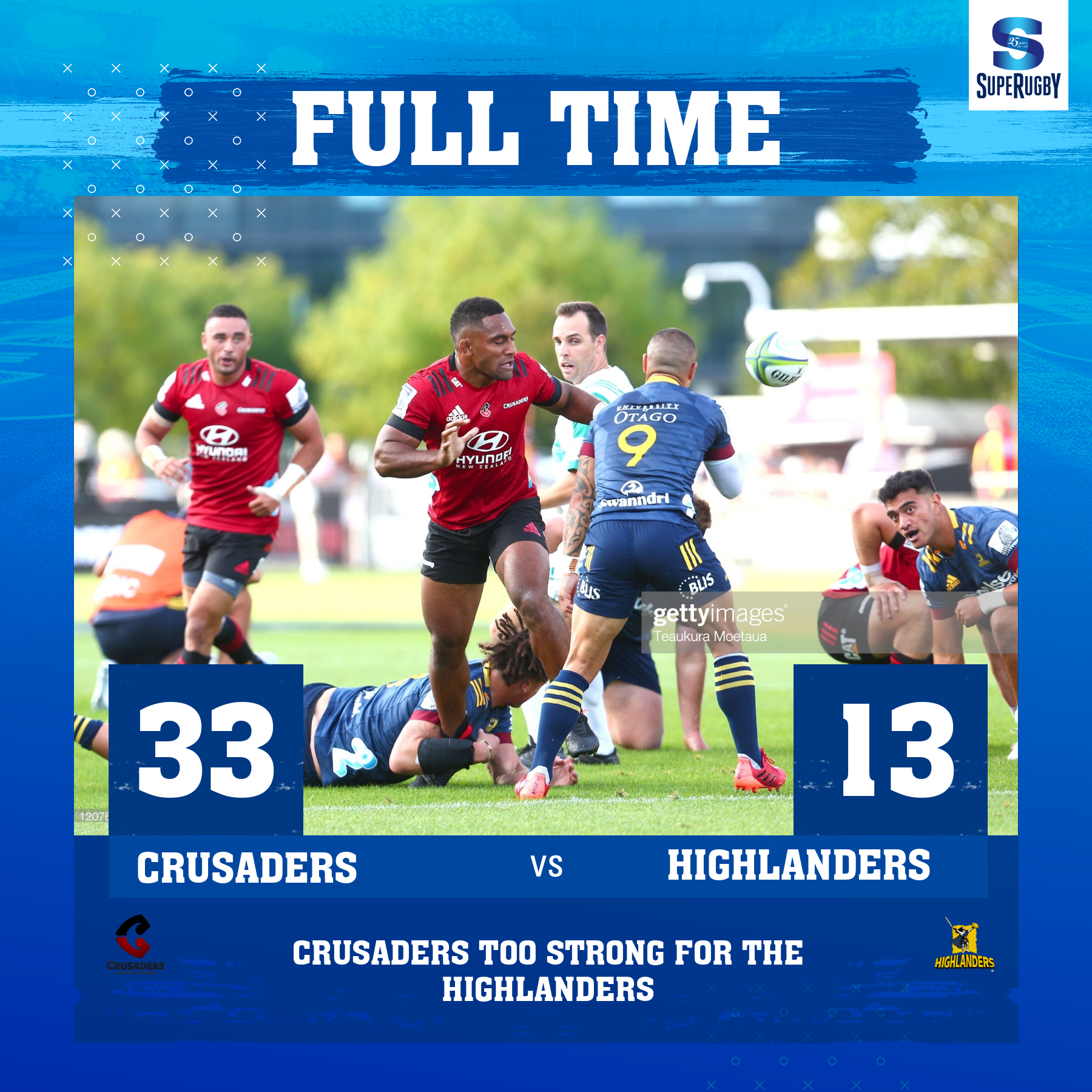