Defending Super Rugby champions Crusaders came back from a half-time deficit to beat the Highlanders 43-17 in Christchurch on Friday.

Like most New Zealand derbies, this was an entertaining affair and although the Highlanders held the upper-hand during the game’s early stages, the Crusaders took control of proceedings during the latter stages of the first half and continued to dominate until the end.

They eventually outscored the Highlanders by six tries to two with Braydon Ennor, David Havili, Sevu Reece, Mitchell Drummond and Will Jordan all crossing the whitewash for the champions and they were also awarded a penalty try. Their other points came via the boot of Richie Mo’unga, who kicked three conversions and a penalty while Mitchell Hunt also added a conversion.

Ben Smith, who was playing in his 150th game for the Highlanders, scored a try for the visitors and Josh Ioane contributed 10 points via a five-pointer, a conversion and a penalty while Bryn Gatland succeeded with a conversion as well.

The visitors made a superb start and opened the scoring as early as the third minute courtesy of a well-taken try from Smith, who burst through a gap in the Crusaders’ defence before stepping past a couple of defenders on his way over the try-line.

Ioane added the extras before slotting a penalty which gave the Highlanders a 10-0 lead by the 12th minute and they continued to dominate over the next 10 minutes but could not extend their lead.

That proved costly as the Crusaders soon got into their stride and struck back via a try from Ennor in the 26th minute which was converted by Mo’unga and the teams changed sides with the Highlanders holding a slender three-point lead.

The home side started the second half like a house on fire and two minutes after the restart Havili crossed the whitewash.

They were also awarded a penalty try in the 53rd minute after the visitors’ forwards capitulated under pressure at a scrum close to their try-line.

Four minutes later, Ennor gathered a crossfield kick from Mo’unga before offloading to Sevu Reece, who cantered in for an easy five-pointer and when Mitchell Drummond crossed for the champions’ fifth try in the 69th minute the match was over as a contest.

The Highlanders struck back via Ioane’s try in the 74th minute but Jordan sealed an emphatic win for the home side when he crossed for their sixth try in the game’s closing stages. 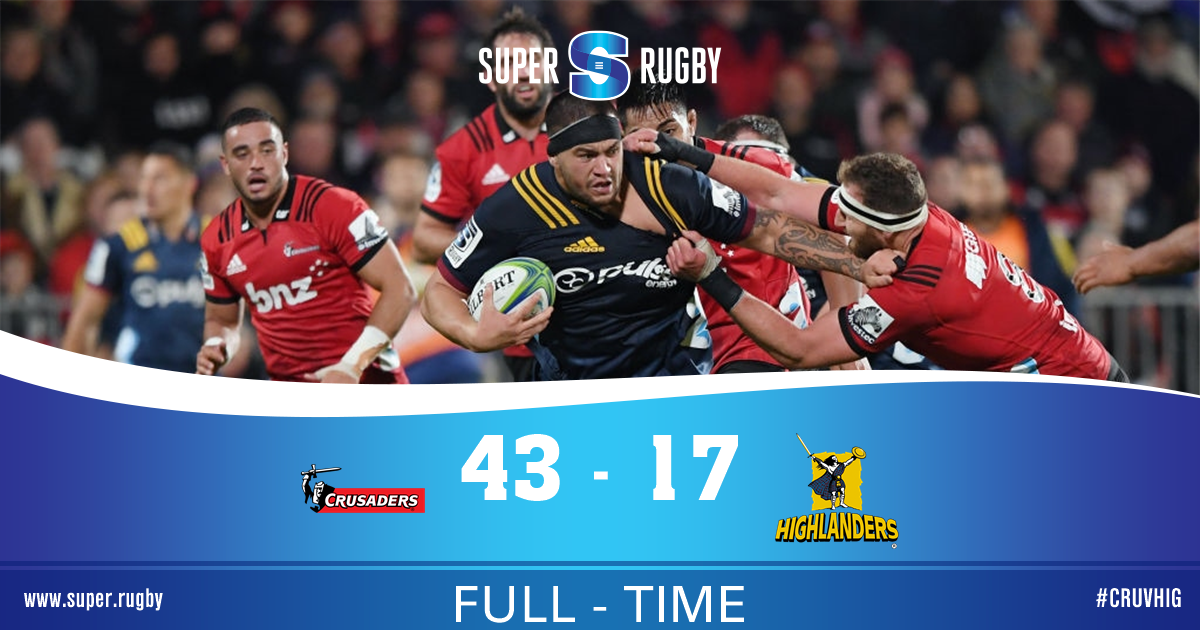