Crusaders Down Chiefs in Hamilton

The Crusaders consolidated their position at the top of the Super Rugby standings when they beat the Chiefs 34-20 in their New Zealand derby in Hamilton.

As expected, this was an entertaining affair with plenty of end-to-end action and although the Chiefs were competitive throughout, the Crusaders got the rub of the green in the end as they outscored their hosts four tries to two.

The win is the Crusaders' tenth successive one and gives them a nine-point lead at the top of the New Zealand Conference while the Chiefs are now in fourth spot, 12 points adrift of the defending champions.

The Crusaders held the upper hand during the opening exchanges and took the lead in the fourth minute when Codie Taylor took a tap penalty deep inside the Chiefs' before passing to Heiden Bedwell-Curtis, who went over in the left-hand corner for the opening try.

Richie Mo'unga added the extras before Damian McKenzie opened the Chiefs' account courtesy of a penalty in the 11th minute.

The visitors continued to dominate and increased their lead in the 18th minute when Mo'unga added a penalty but the Chiefs struck back two minutes later when Sean Wainui rounded off a flowing move in the left-hand corner midway through the half.

McKenzie's conversion attempt was off target but three minutes later the Chiefs took the lead when Luke Jacobson crossed for their second try after Charlie Ngatai and Angus Ta'avao did well in the build-up.

McKenzie failed to convert again which proved costly as the Crusaders finished the half stronger and regained the lead during the latter stages of the half.

First, Matt Todd barged over from close quarters off the back of a lineout drive in the 35th minute and three minutes later, Mo'unga added another penalty which meant the champions had their tails up with the score 20-13 in their favour at half-time.

The Crusaders were fastest out of the blocks in the second half and were rewarded in the 45th minute when George Bridge crossed the whitewash after running onto a pass from Seta Tamanivalu deep inside the Chiefs' 22.

Mo'unga landed the conversion which meant the Crusaders were in control with a 14-point lead but the Chiefs struck back in the 50th minute when Jacobson showed great strength to power his way over the try-line from close quarters and McKenzie's extras meant the home side had cut the deficit to seven points.

The rest of the half was an arm wrestle as both teams had chances to score further tries but a combination of solid defence and some handling errors meant the sides cancelled each other out during this period.

The Crusaders dominated the latter stages of the game, however, and sealed their win in the 77th minute when Luke Romano crashed over for their fourth try, from close quarters. 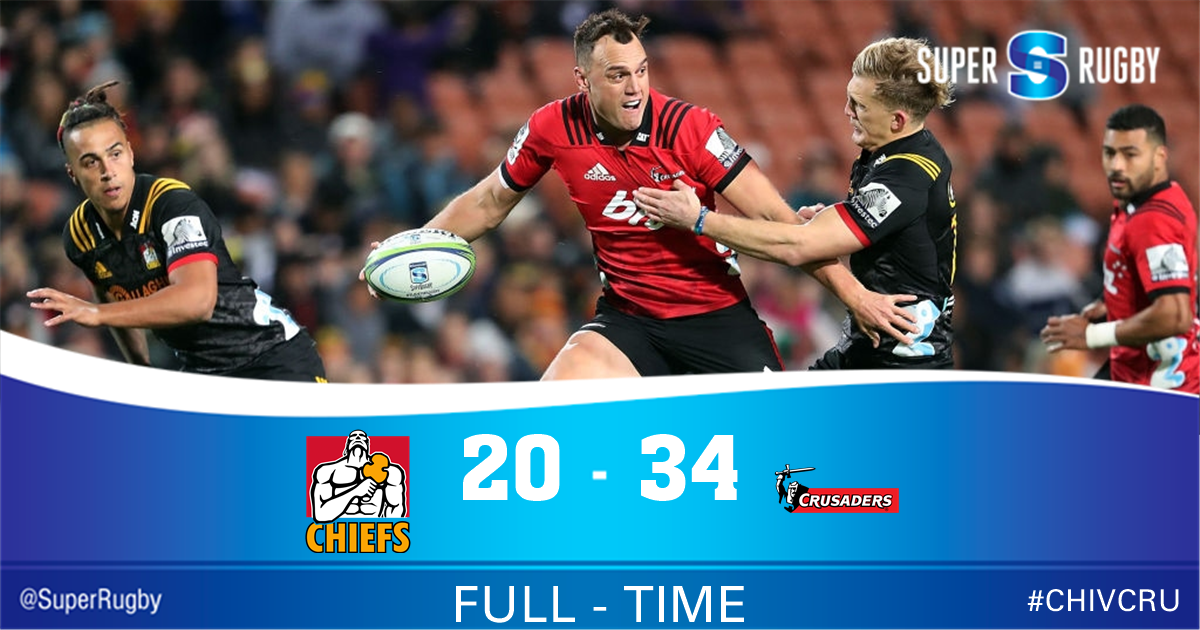