All Black fly-half Richie Mo'unga was superb in the Crusaders' 39-25 win over the Hurricanes in their opening Super Rugby Aoteatoa match in Wellington on Sunday.

The 10-time Super Rugby champions had a bye in the tournament’s opening round last weekend, but made up for lost time with a fine performance and they eventually outscored their hosts by five tries to one to secure a deserved bonus-point.

Jackson Garden-Bachop led the way for the home side with a 20-point haul courtesy of five penalties, a drop-goal and a conversion to Asafo Aumua’s try.

In what has become the norm between matches involving New Zealand teams, there was plenty of thrilling action throughout with both sides showing a willingness to run the ball from all areas of the field.

The Crusaders made their intentions known from outset and from a lineout inside their half, shortly after the kick off, the ball went through several pairs of hands before Reece crossed in the right-hand corner for the opening points.

Garden-Bachop reduced the deficit when he slotted a penalty in the seventh minute after the Crusaders strayed offside on defence.

The men from Christchurch continued to dominate as the half progressed and increased their lead in the 14th minute when Ennor scored their second try after gathering a Bryn Hall grubber kick behind the Hurricanes’ try-line.

Mo’unga was off target with the conversion attempt before Garden-Bachop succeeded with another penalty which meant the Crusaders were leading 12-6 midway through the half.

Despite their dominance, the Crusaders conceded several penalties and in the 28th minute Garden-Bachop added another three-pointer off the kicking tee after Michael Alaalatoa was blown up for illegal scrummaging.

The Hurricanes pivot kept his side in the match and three minutes later he slotted a drop-goal which drew his side level at 12-12.

Shortly afterwards, Chase Tiatia failed to gather a high kick inside his half and Joe Moody pounced on the loose ball. The All Black prop got a pass out to Will Jordan, who offloaded to Goodhue and he cruised in under the posts for his side’s third try.

Despite that score, the Crusaders continued to infringe on defence and in the 36th minute Garden-Bachop succeeded with another penalty which meant his side were still in the match at half-time with the visitors holding a 19-15 lead.

The Crusaders suffered a setback shortly after the restart when Goodhue was yellow carded for offside play, after his team were penalised numerous times for similar offences earlier on.

Garden-Bachop slotted the resulting penalty but Mo’unga also added a three-pointer off the kicking tee soon after to restore his side’s four-point lead.

In the 63rd minute Aumua ran onto a pass from Ngani Laumape deep inside Crusaders territory and powered his way over the try-line from close quarters. Garden-Bachop added the extras from close to the touchline which meant the match was up for grabs with the sides level at 25-25.

The Crusaders did not panic though and regained the initiative during the final quarter. They continued to run the ball and their attacking endeavour was rewarded with tries from Mo’unga and Havili in the game’s closing stages which sealed their win. 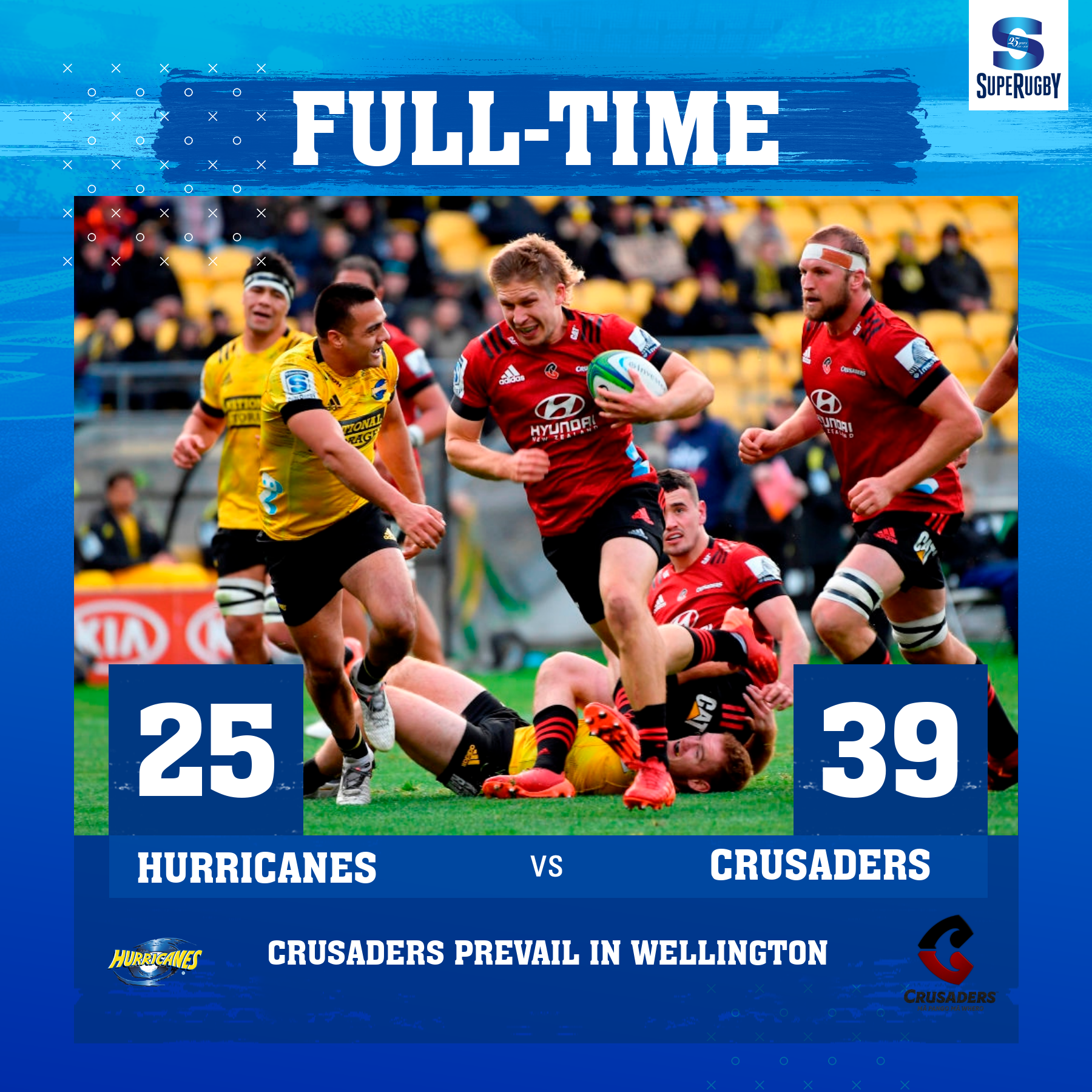