The Brumbies nearly snatched an unlikely draw against the Crusaders in Christchurch, who held on for a 31-29 victory despite a fantastic comeback from the visitors.

Fresh from their Super Rugby AU grand final loss to the Reds, the Brumbies looked down and out after falling 31-17 behind with 10 minutes to play in the Trans-Tasman clash, but two superb late tries by the men from Canberra nearly saw them snatch a share of the spoils, with flyhalf Noah Lolesio only just missing with a final kick at goal that would have given them the draw.

It's a match the Crusaders may consider themselves somewhat lucky to win, as the Brumbies didn't always have the luck of the draw, with a crucial second-half call going against them just as they'd managed to find a way back into the match.

The home side started well, with some early pressure soon resulting in points as they shifted it left and then right to create an overlap on the outside for flanker Ethan Blackadder to dot down in the corner.

A messy period of play followed, with numerous reset scrums, penalties and handling errors leading to a stop-start game.

The match finally sprang to life when Brumbies centre Irae Simone intercepted a Crusaders pass and nearly ran the length of the field for a try.

While the Crusaders hauled him in, they gave away a penalty to give the visitors a rare chance to stay on the attack, and from the ensuing passage of play, the Brumbies got the reward they were looking for as Scott Sio bashed his way over the line from up close. Noah Lolesio added the extras as the visitors took a surprise 7-5 lead.

Unfortunately for the Brumbies, they failed to collect the kick-off from the restart and put the Crusaders right back on the attack, leading to a brilliant individual try for flyhalf Richie Mo'unga from behind the scrum, as he beat the defence with a killer step and accelerated all the way to the line before converting his own try.

The Crusaders' third try came courtesy of another intercept - this time for David Havili - who had twice been caught offside in the game but timed things to perfection on this occasion, snatching Ryan Lonergan's pass before running all the way for the try.

With time running out in the half, the Crusaders forced a turnover right on the Brumbies line and looked certain to score before Braydon Ennor knocked the ball on as he tried to dive over the top of the ruck for the try.

The Brumbies enjoyed a rare spell of possession at the start of the second half, looking dangerous with ball in hand, and after making their way all the way to the Crusaders line, Irae Simone picked the ball up from the back of the ruck and stretched over for the try before the Crusaders could even react. Lolesio added the extras to bring the visitors back to within five.

The Brumbies were enjoying more possession in the second stanza, and Lolesio reduced the deficit to just two points shortly before the hour mark when they were awarded a penalty right in front.

The Crusaders' fourth try came after a dodgy foul-play penalty call at line-out time against the Brumbies inside their own 22, and the hosts didn't need a second invitation to take advantage of the referee's gift as Brendon O'Connor scored the simplest of tries from behind a powerful rolling maul.

And another five-pointer followed for the hosts shortly after as Cullen Grace latched onto Ereatara Enari's flat pass and powered over the line next to the posts, with the visitors looking dead and gone.

But with nine minutes to go, the Brumbies showed they still had some fight left in them as a wraparound pass from behind the scrum created the space on the outside for Tom Banks, who skinned the covering defence to score a superb individual try before Lolesio added the extras to bring them back to within seven.

With time running out, the Brumbies were given a great chance to snatch something from the match when Enari was sent to the bin for repeated infringements and they found themselves camped in the Crusaders 22 with the ball in hand.

And they nearly did just that when a long, looping pass out wide found Rob Valetini for a great try in the corner, handing Lolesio a chance to earn a draw with a tough kick right near the touchline. Unfortunately for the Brumbies, Lolesio's effort was good but sailed just wide at the last second as the Crusaders hung on for the narrow victory. 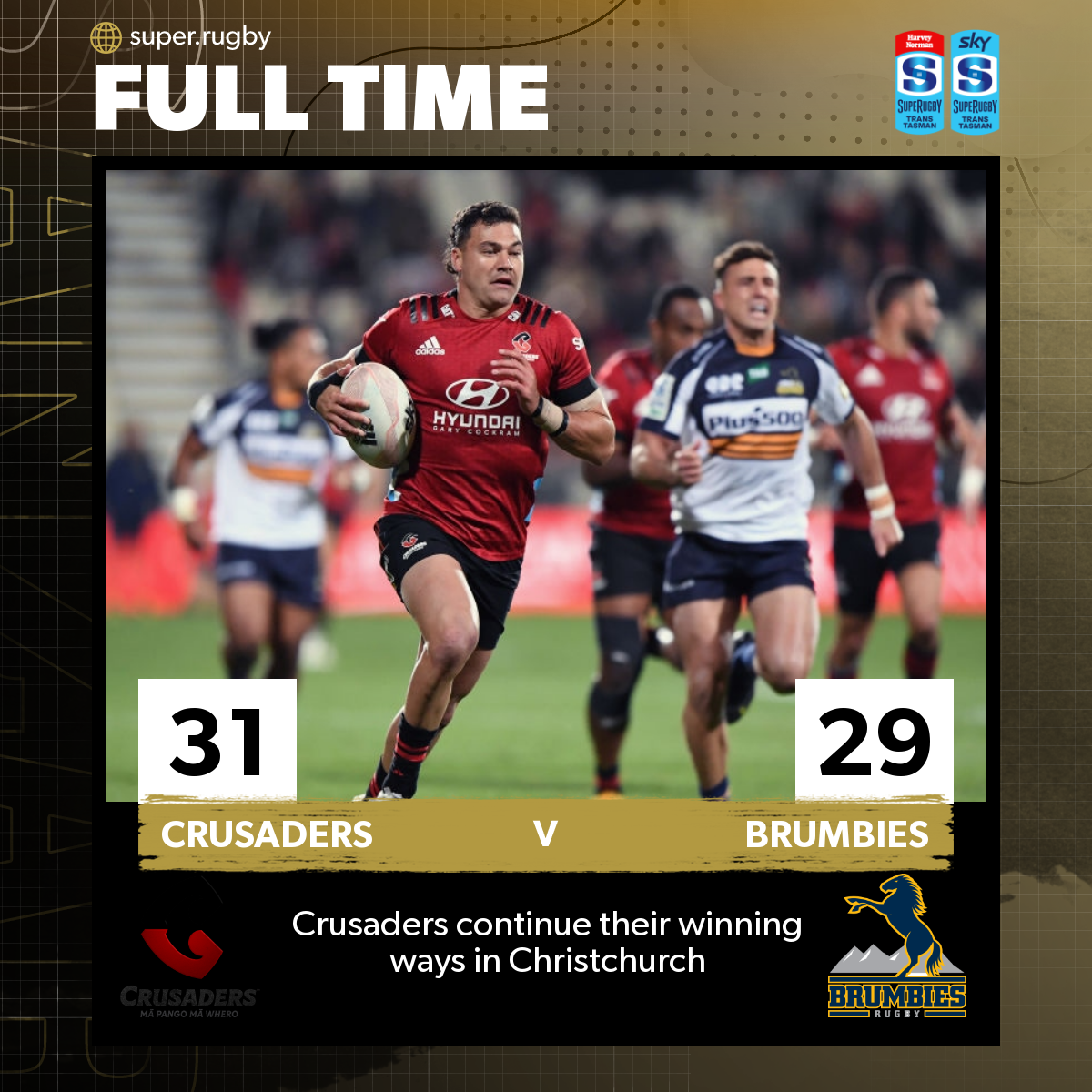