The Crusaders claimed a dramatic 30-27 Super Rugby Aotearoa victory over the Hurricanes on Sunday as David Havili slotted a dropkick in golden point extra time.

This after the Crusaders levelled matters just after the hour mark, eventually adding three more points in extra time to snatch the win.

The Hurricanes were handed an early chance to grab the lead after earning a penalty 50 meters out and while Jordie Barrett managed to put enough power on his kick, it drifted wide of the left hand upright.

However, Barrett made amends for that miss just a few minutes later, slotting over after Codie Taylor was penalised for failing to release the ball.

The Crusaders were quick to post a response, however, as they charged down the restart kick and pushed at the 5, with George Bridge eventually awarded the try after a check from the TMO. Richie Mo'unga stepped up to take the conversion from the touchline out on the left and made no mistake, adding to the two extras.

The Crusaders got themselves in the perfect position to score a try a short while later after earning a penalty at the breakdown five metres out but after taking a quick tap, they lost possession of the ball as Ardie Savea won it back for the Canes.

And, after toiling near the halfway line without making gains, the Crusaders would eventually stretch further ahead in the 24th minute, Bridge bagging his second try of the game after latching onto Taylor's searching kick upfield. Mo'unga secured the extras to give his side an 11-point cushion just past the midway point.

The Canes responded in the best possible manner, however, as Coles handed it off to Ngani Laumape, who showed his raw pace and power as he barged over to score. Barrett added the extras from close range, reducing the deficit to just four points.

But the Crusaders were quick to hit back, Mo'unga slotting the penalty over from close range after Laumape was penalised for no release.

It was turning into a real see-saw battle as Julian Savea put the Canes back within touching distance on the half-hour mark, snatching up the offload from James Blackwell on the left wing before taking it all the way to score. Barrett secured the extras to make it 17-17 with around ten minutes left in the half.

There was a close shave for the Crusaders on the stroke of half-time as Savea very nearly got over the line but the defence managed to stand firm and hold him up. To add insult to injury, the Hurricanes subsequently saw Laumape yellow-carded for taking Barrett out of the breakdown in the build-up.

However, the Hurricanes came flying out of the starting blocks after the break, adding another try after just three minutes of play. Savea broke down the blindside before offloading to Barrett, who sent Wes Goosen clear to score, with Barrett securing the extras to make it 24-17.

After a brief lull in play, Mo'unga converted another penalty on 57 minutes to reduce the deficit to four points, only for Barrett to restore the Hurricanes' seven-point lead with a penalty of his own.

The Crusaders redoubled their efforts and were rewarded in the 64th minute as Sevu Reece rounded off a great passage of play to grab a try, with Mo'unga securing the two extras to make it 27 apiece and set up a tense finish.

But with neither side able to find the all-important breakthrough in the remaining minutes the match would go to golden point extra time.

It took just two minutes for the Crusaders to hit the finishing blow, David Havili running into a gap before converting a dropkick to end the game in dramatic fashion. 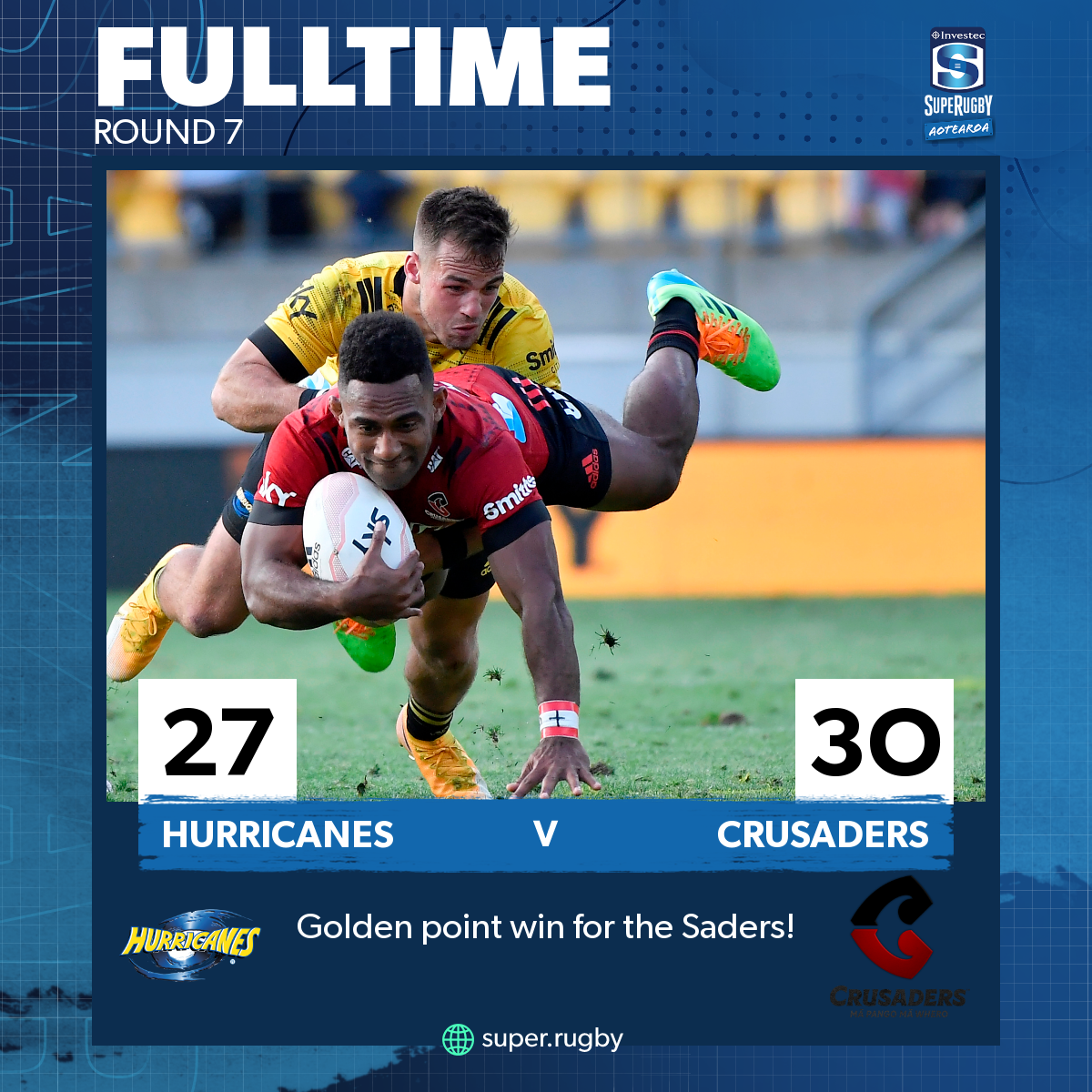