Crusaders edge the Blues in a tight contest.

Saturday’s result in Auckland could have gone either way with both New Zealand teams in superb form at such an early stage of the season.

But it was the nine-time champions who ended with their noses in front, two late misses at goal from Harry Plummer leaving the Blues short.

The Blues can however take a large amount of confidence from their showing and against many other teams in the competition this was worthy of a win. Ultimately they met an outstanding champion outfit without the ball who know how to win high pressure games.

Early on it was all the Blues as they toiled to bust through a formidable Crusaders defence. The visitors continuously repelled the home team, who were anything but predictable but, such was the eagerness and strength of the holders, they did not give an inch and refused to buckle.

The Blues, bolstered by Ma’a Nonu’s return to the fold, did get themselves in front through an Otere Black penalty on 14 minutes. It was a reward for an excellent opening to their game with scrum-half Michael Ruru also impressing from the base as he looks to win the nine shirt.

But that was the moment the Crusaders eventually got their hands on possession and displayed their attack nous, a cross-kick from Bryn Hall close to an attacking scrum setting up Manasa Mataele for an unconverted crossing. It was a horrible kick to defend for Blues full-back Michael Collins.

Black and Richie Mo’unga would then miss a penalty apiece before the Crusaders line-out drive saw them awarded a penalty try on 26 minutes. The Blues did come close to cutting the 12-3 scoreline down in size before the break but Akira Ioane was held up to end the opening period.

Leon MacDonald’s men came out firing in the second 40 as a lovely attack led to Collins keeping it in hand before Patrick Tuipulotu offloaded to number eight Ioane for a superb finish. Then, with their scrum very much on top, Ofa Tu’ungafasi reached out to make it 17-12 to the Blues.

The Crusaders acted swiftly and brought on Luke Romano for Jordan Taufua to add extra weight to their pack and it turned the game, but not before Mataele finished after George Bridge had broken through the defence on halfway. A scrum penalty try then put the Crusaders 24-17 up.

The drama wasn’t over however as replacement scrum-half Augustine Pulu barged over to leave Plummer a crucial kick on 74 minutes. The young back was unsuccessful and then again was off-target on 78 minutes, this time from distance, as the Crusaders held on for the spoils. 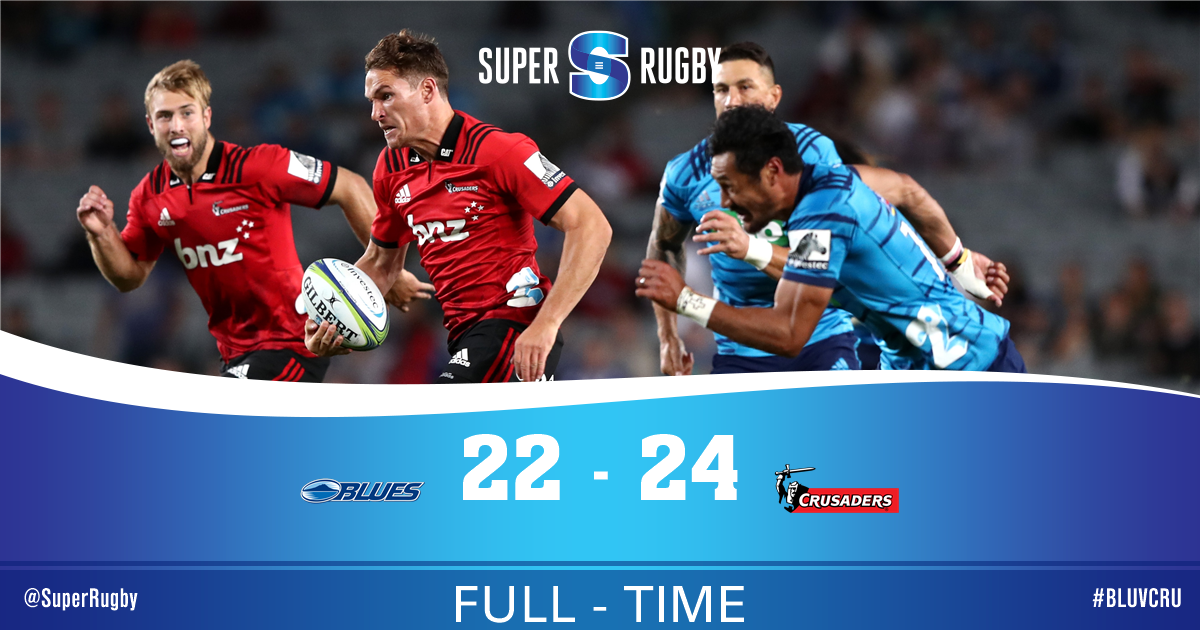 Cons: Penalty try does not require a conversion 2