The Crusaders kept intact their unbeaten home record against the Stormers with a 45-28 victory at AMI Park in Christchurch on Saturday.

The Crusaders have never lost to the Stormers at home and it is now 13 wins on the trot at home against teams from outside New Zealand for the Canterbury outfit, while the Stormers have lost their last nine in a row in New Zealand.

The Crusaders came flying out of the blocks, leading 26-0 after only twenty minutes as their backline ran riot.

Jack Goodhue's brilliant long pass found Bridge out on the left touchline who managed to produce a classy one-handed finish with very little room for the defending champions' first try in the sixth minute.

The second was scored in the same corner and came from an attacking scrum with Mo'unga freeing up Codie Taylor after the ball had gone through the hands from first phase. Taylor did well to stay in field to produce the finish despite the best efforts of Senatla to push him out. Mo'unga added the extras.

In the 16th minute, the holders had their third when Billy Harmon went over in his run-on debut as the Crusaders quickly turned defence in to attack.

Then, Pete Samu smashed through three defenders in midfield, before a series of good offloads ensured Bryn Hall would canter in under the posts unopposed and it was beginning to look like deja vu for the visitors, who let in 62 points here last season.

In contrasting style to the Crusaders, the Stormers were playing a direct style of rugby, taking the ball up through the forwards around the fringes and showed that if they put phases together they would be rewarded. JC Janse van Rensburg popped up for his side's first try, bursting over after a series of powerful carries from the forwards in the 33rd minute. SP Marais converted to make it 26-7.

However, the Crusaders would have the last laugh of the first-half. David Havili went on mazy run. Mo'unga's grubber kick through was badly fumbled by Raymond Rhule, as Bridge pounced on the loose ball and crossed the whitewash as the hosts took a 31-7 lead in to the interval.

The Stormers were a different team in the second half. Straight from the re-start, Dewaldt Duvenage put up a box-kick, which was excellently gathered by Seabelo Senatla, who offloaded to Bongi Mbonambi who in turn offloaded to Siya Kolisi and he ran twenty metres before being halted just short. The ball was recycled to Wilco Louw, whose leg drive powered him over the line from close range.

The visitors continued to dominate possession and terrritory in the second half. After a period of ten minutes in which the men from the Cape were camped deep in Crusaders' territory, the pressure finally told as JD Shickerling burrowed over from close range. SP Marais made it three from three with the conversion to bring the Stormers within 10 at 21-31.

But the Crusaders scored next thanks to a solid platform set by their forwards. From a driving maul, Hall cleared to Mo'unga who timed his pass well for Seta Tamanivalu to scythe between two Stormers defenders and dot down in a well-constructed set-piece move.

And it seemed the Stormers' resurgence was over and the status quo had been restored when Mo'unga showed dazzling feet to step between two props. Mo'unga converted his own try for a 45-21 lead.

But the Stormers rallied once again. Trucking the ball up through the forwards, the pressure would finally tell as substitute prop Steven

Kitshoff would prove too strong for his would-be tacklers, touching the base of the post. Marais maintained his perfect kicking record from the tee this season with the conversion as the Stormers now trailed 45-28.

Although the Stormers came very close to taking a bit more gloss off the Crusaders' victory, they were unfortunate not to score any further tries as the Crusaders ran out 45-28 winners. 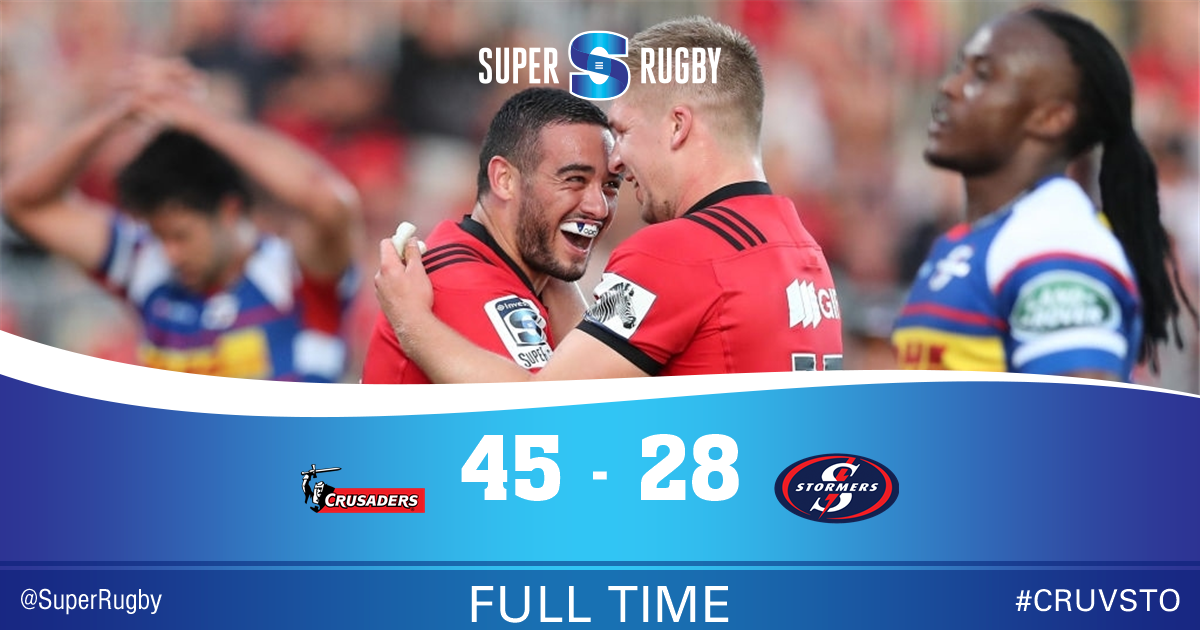