The Crusaders secured a big 52-26 victory over the Rebels in Melbourne on Saturday - but it still might not be enough to secure a place in the Super Rugby Trans-Tasman final.

The men from Christchurch entered the match knowing they likely needed not only a bonus-point win but a large enough margin of victory to pass the Highlanders on the table.

And while they outscored the Rebels eight tries to three, they weren't able to get the extra try they needed at the death to get the points difference they needed.

Now, a victory for the Blues against the Western Force should be enough to see the Aucklanders through to take on the Highlanders in next week's final.

It took the Crusaders just three minutes to open their account after the Rebels lost a lineout near their own try line, with Mitchell Drummond beating Jordan Uelese at close range to score.

And the second try arrived just a couple of minutes later when Richie Mo'unga burst straight through a hole in the defence inside the Crusaders' own 22. The flyhalf took it all the way to the halfway line before offloading to Will Jordan for the score.

The Rebels showed some fight in the 14th minute as they got one back via Trevor Hosea, who barged over the line following a sustained period of attack inside the Crusaders' territory.

Try number three arrived for the Crusaders less than five minutes later when Leicester Fainga'anuku cut inside to score following great work from the likes of Drummond, Jordan and Manasa Mataele in the build-up.

And within minutes the Crusaders had their fourth following another superb counter-attack that started with a break from Scott Barrett and an assist from Mo'unga and finished with Sevu Reece going over in the corner.

The Rebels had shipped four tries in a little more than 20 minutes, but to their credit they finished the first strongly, helped in part by a yellow card to Jordan in the 27th minute for a cynical knock-on to stop a Rebels attack.

With Jordan still in the bin, the Rebels scored their second try via a brilliant solo effort from Joe Powell, who sold a massive dummy to get past George Bower before beating Mataele and Reece to the line.

Braydon Ennor had a golden chance to hit back just before the hooter sounded but knocked on with the try line beckoning as it finished 26-12 to the Crusaders at half-time.

Six minutes after the break, the visitors got the try they should have scored when Ennor had the try line at his mercy, as Reece cantered over in the corner for his second of the afternoon.

The Rebels weren't done yet, however, and hit back with their third try in the 56th minute when centre Glen Vaihu crossed for his first try in Super Rugby after several probing attacks near the line from the forwards.

But the Crusaders hit back almost immediately when they earned a penalty in the Rebels 22 and Reece caught the defence napping with a quick tap before crashing over for his hat-trick.

Again the Rebels responded when a wide pass from the visitors meant for Jordan went astray, allowing Marika Koroibete to pounce on the loose ball before offloading to Frank Lomani for the score in the corner. 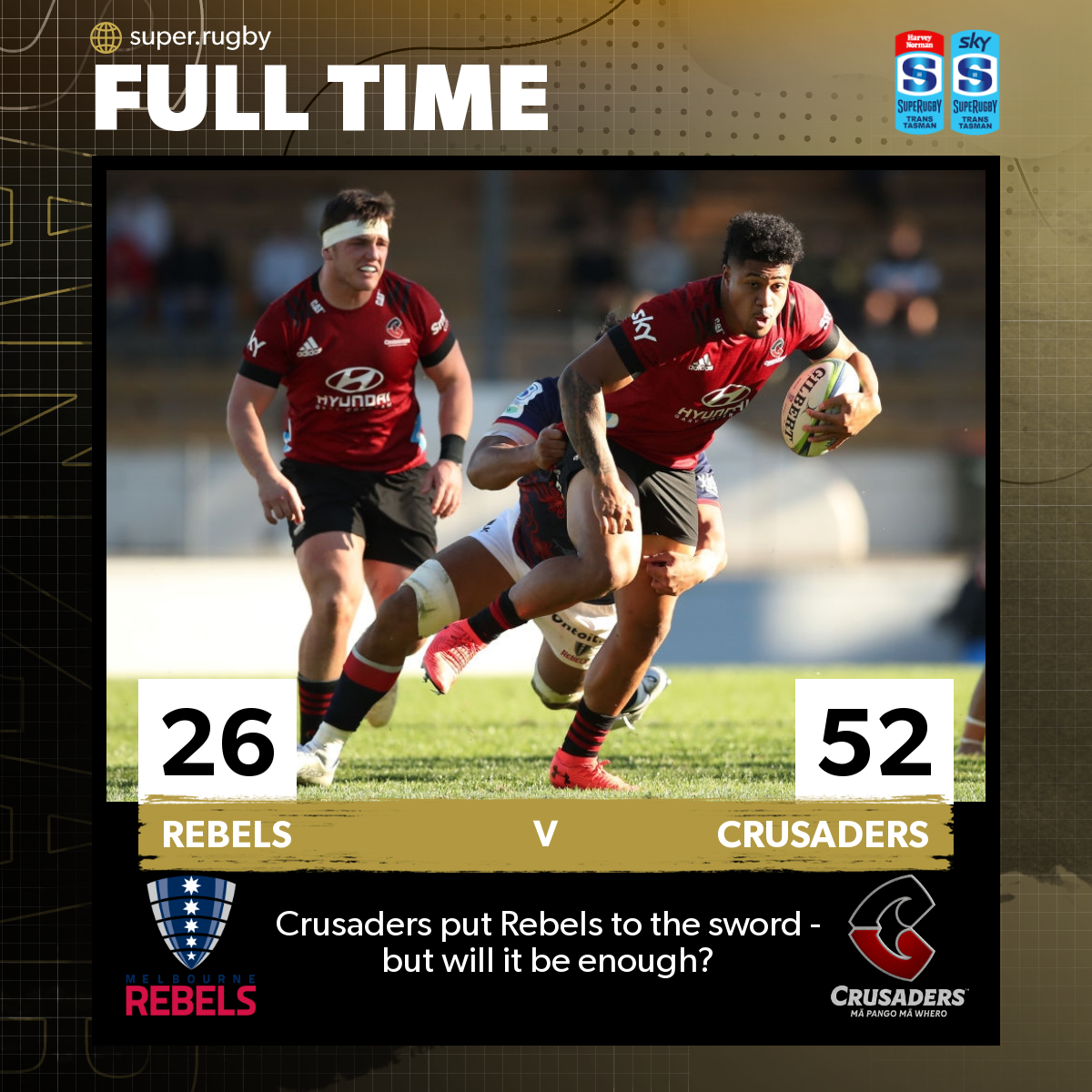 It was now just a 12-point ball game heading into the final 15 minutes but the Crusaders were soon in again following another quick tap in the Rebels 22, with a pass to Oliver Jager doing the trick and sending the substitute over.

The Rebels were reduced to 14 men a minute later when Steve Cummins got his marching orders, and the Crusaders scored try number seven shortly after when Bryn Hall sent Braydon Ennor through the smallest of gaps in the centre of the field to score.

With just minutes to play, the Crusaders were desperate to score another try and move past the Highlanders on the table via points difference, but the Rebels mounted a strong finish and it was they who came closest to scoring before the referee blew his whistle to signal the end of the match, with the visitors just one try short of the points total they were looking for.