Crusaders get the job done against Blues

The Crusaders consolidated their position at the top of the standings when they claimed a hard-fought 32-24 win over the Blues in Auckland on Saturday.

In a typical New Zealand derby, in which the sides employed expansive game-plans, both the Crusaders and Blues scored four tries apiece although it was the goal kicking of Richie Mo’unga which proved the difference between the sides in the end as he finished with a 12-point haul courtesy of three conversions and two penalties.

The result means the Crusaders return to the top of the overall table and the New Zealand Conference while the Blues are still at the bottom of their country’s conference.

The match started at a frentic pace and despite wet underfoot conditions, both sides stayed true to their attacking roots by giving the ball plenty of air.

That tactic reaped reward for the Crusaders as early as the third minute when Mo’unga and Jack Goodhue combined brilliantly before Goodhue delivered a perfectly-weighted grubber kick which George Bridge gathered before sliding over and dotting down behind the Blues’ tryline.

Mo’unga slotted the conversion but the Blues struck back four minutes later when Rieko Ioane set off on an attacking run from the halfway mark. He did well to draw in a couple of defenders close to the Crusaders’ 22 before throwing an inside pass to Matt Duffie, who crossed for a deserved try.

The Crusaders soon took control of proceedings though and held a 22-5 lead by the half-hour mark thanks to a penalty from Mo’unga and well-taken tries from Quinten Strange and Matt Todd.

Strange’s five-pointer came from close quarters in the 22nd minute and Todd increased his side’s lead when he dotted down after a lineout drive deep inside Blues territory.

The Blues struck back in style when Sonny Bill Williams made a telling break before offloading in trademark fashion to Rieko Ioane, who crossed the whitewash with two defenders on his back.

The visitors would finish stronger though and on the stroke of half-time they launched another lineout drive before Bryn Hall gathered and set off on a break around the blindside before crashing over.

Mo’unga slotted the conversion from close to the touchline which meant the champions held a 29-12 lead at the interval.

The Crusaders suffered a setback early in the second half when Strange was yellow carded for a dangerous challenge on Jerome Kaino in the 46th minute. The home side were soon on the attack inside the Crusaders’ 22 and two minutes after Strange’s exit, the ball was shifted to Rieko Ioane, who went over in the left-hand corner for his second try.

Stephen Perofeta added the extras before Mo’unga kicked another penalty which gave the visitors a 32-24 lead by the 54th minute. The Blues refused to surrender, however, and they narrowed the gap in the 64th minute when Michael Collins dotted down after running onto a Rieko Ioane pass deep inside the Crusaders’ half.

The final 15 minutes was a crazy affair as both sides ran the ball from all areas of the field and the Crusaders thought they had scored their fifth try when Mo’unga crossed the whitewash in the 77th minute but his effort was disallowed when the TMO ruled that he had knocked the ball on before dotting down. 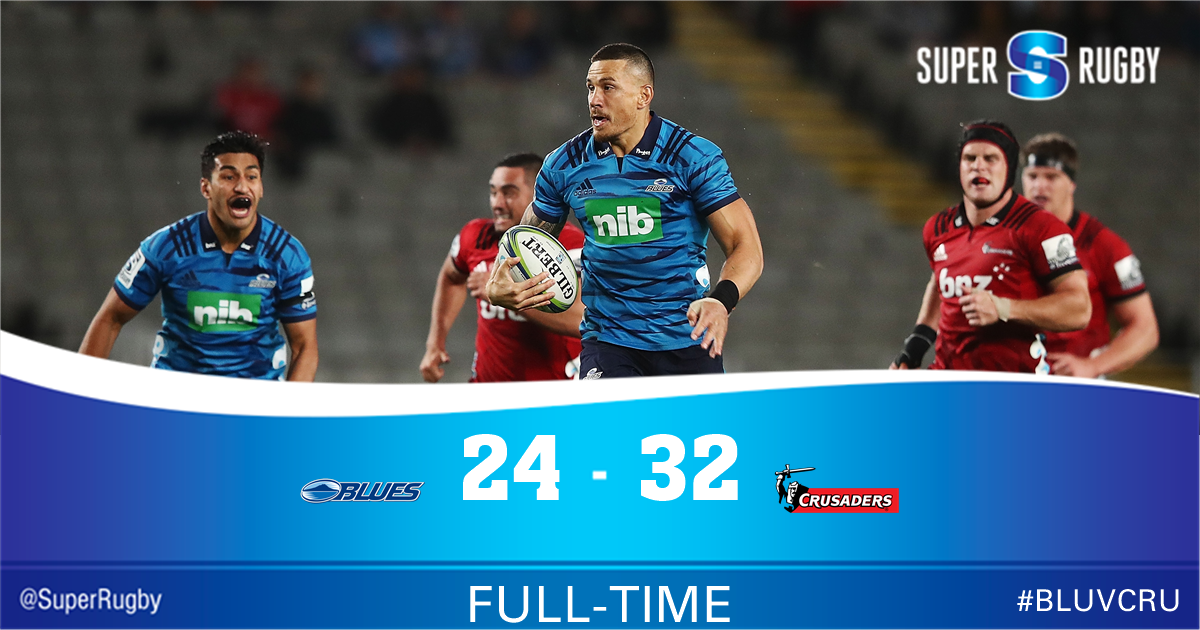