The Crusaders were back to playing some of their best rugby as they defeated the Blues 25-8 in their Super Rugby clash in Auckland Park on Friday.

After losing to the Chiefs in Hamilton last week, the Crusaders were keen to bounce back and they did just that courtesy of an impressive all-round performance which paved the way to their 11th successive victory over the Blues.

Tries from George Bridge, Richie Mo’unga and Jack Goodhue got the job done for the Crusaders and David Havili finished with a 10-point haul courtesy of two penalties and two conversions.

For the Blues, Patrick Tuipulotu scored a try and Harry Plummer succeeded with a penalty.

The Blues made a superb start and opened the scoring in the sixth minute courtesy of Tuipulotu’s try. Stephen Perofeta laid the groundwork with a telling break in the build-up before he was brought to ground deep inside Crusaders territory. The ball was recycled quickly to the Blues skipper, who shrugged off three defenders on his way over the try-line.

Perofeta failed with the conversion attempt before Havili opened the Crusaders’ account with a penalty in the 18th minute.

Although the Blues had the bulk of the possession, the Crusaders soaked up the early pressure and took the lead in the 25th minute when Bridge gathered a brilliant offload from Goodhue before crossing in the left-hand corner.

Havili failed to convert but made up for that miss when he slotted a three-pointer off the kicking tee which meant the champions were leading 11-5 at half-time.

The Blues made a tactical substitution during the interval with Plummer coming on for Matt Duffie and the replacement fly-half made an immediate impact when he slotted a penalty two minutes after the restart.

The Crusaders did not take long to respond though and in the 45th minute Mo’unga ran onto a pass from Michael Alaalatoa close to the Blues’ 22-metre line before dotting down under the posts.

The champions continued to dominate and in the 58th minute they increased their lead when Goodhue crossed for their third try. This, after he launched a teasing chip kick inside the home side’s 22 which was gathered by Mo’unga and he offloaded to the All Blacks centre, who cantered in under the posts.

That score seemed to knock the wind out of the Blues’ sails and although they tried to fight back during the final quarter, they had no luck as the Crusaders kept them at bay with a strong defensive effort. 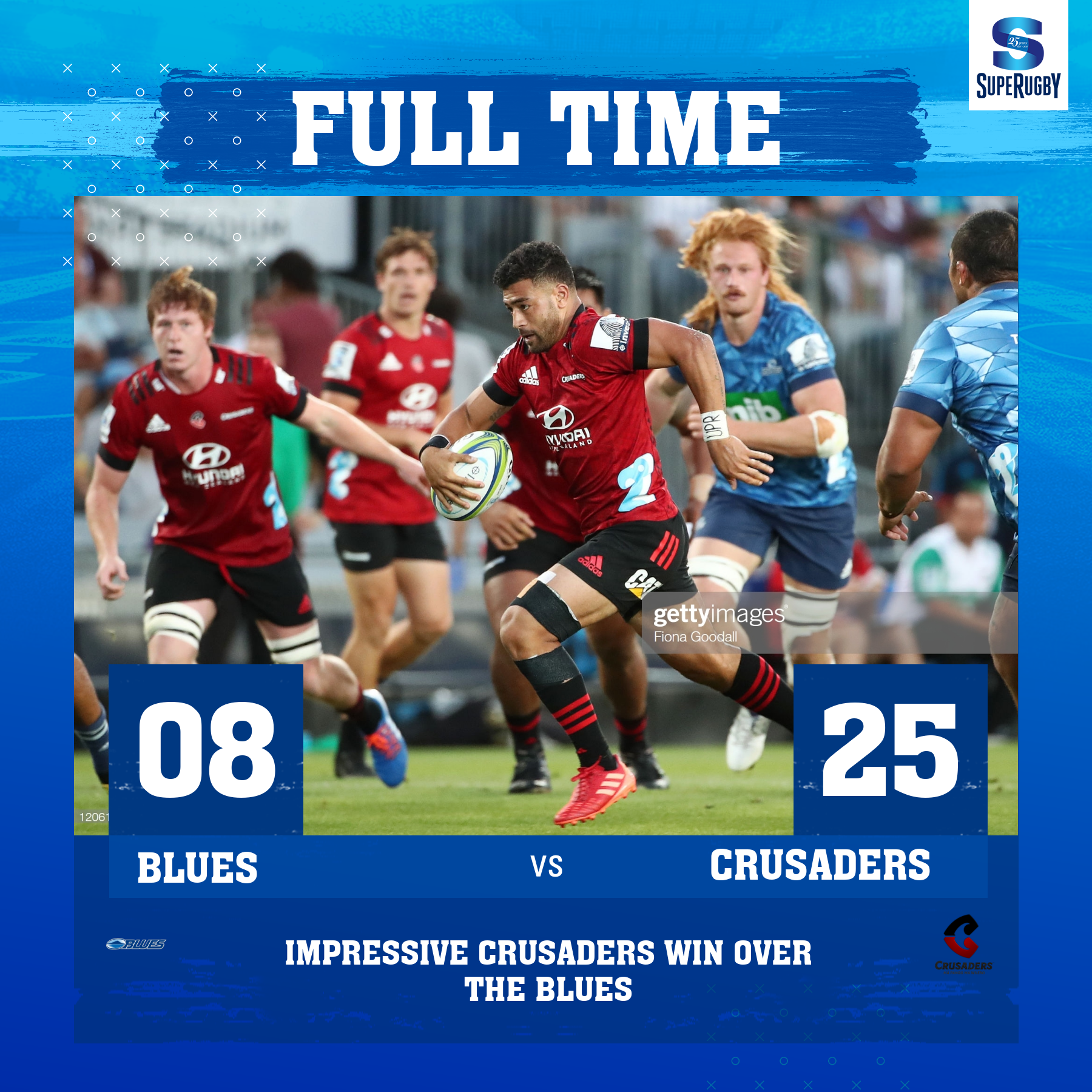