The Crusaders edged the Chiefs 18-13 in a wet and tense affair in their Super Rugby Aotearoa clash in Christchurch on Sunday.

As the scoreline suggests, this was a tight affair but the home side were deserved winners as they were the dominant side for most of the match.

The game was played in difficult conditions with heavy rain restricting play mostly to the forwards but when the ball was played to the backs, however, the Crusaders were the more enterprising side and outscored their hosts two tries to one.

Will Jordan led the way for the Crusaders with a brace of tries and their other points came via two penalties and a conversion from Richie Mo’unga. For the Chiefs, Sean Wainui scored a try and Damian McKenzie succeeded with a conversion and two penalties.

There was little interesting to report during the opening half-hour as the wet weather meant there were a plethora of unforced errors from both sides.

The Crusaders took the lead in the 11th minute courtesy of a Mo’unga penalty after Nepo Laulala was blown up for a scrum infringement. The visitors came back strongly during the next 15 minutes though as they had the bulk of the possession but a 24th minute penalty from McKenzie was their only reward during that period.

Three minutes later, the All Blacks full-back lined up another shot at goal, after Billy Harmon infringed on defence, but his effort was wide of the mark.

That proved costly as the home side regained the lead in the 33rd minute when Jordan crossed for his first five-pointer. This, after McKenzie failed to gather a high ball just inside his half. The ball was caught by Sevu Reece, who set off on an attacking run before throwing an inside pass to the on-rushing Jordan and the full-back had an easy run-in for the game’s opening try.

Mo’unga’s conversion meant the home side held a 10-3 lead at half-time.

The Chiefs came out firing in the second half but despite some strong attacking runs, they had little to show for their efforts.

And against the run of play the Crusaders extended their lead in the 46th minute when Jordan dotted down for the second time. Reece caught the visitors napping when he took a quick throw-in at a lineout which Jordan gathered at full pace. He burst through a tackle from Brad Weber close to the Chiefs’ 22 before crossing the whitewash.

The next 15 minutes was a scrappy affair as the sides battled to gain the ascendancy but Mo’unga gave his side an 18-3 lead on the hour-mark when he slotted another penalty after Mitch Brown played the ball on the ground at a ruck.

The Chiefs needed a response and they were soon on the attack deep inside the Crusaders’ half. And after taking the ball through several phases inside the home side’s 22, Wainui scored their only try when he ran onto a pass from Weber.

That score seemed to reinvigorate the visitors as they held the upper-hand during the next 10 minutes. In the 70th minute, McKenzie reduced deficit further when he slotted another penalty after Cullen Grace strayed offside in defence.

The closing stages were frantic as the visitors went in search of the win but despite spending most of that time inside their opponents’ half, they were met by a solid defensive effort and the Crusaders held on for the victory. 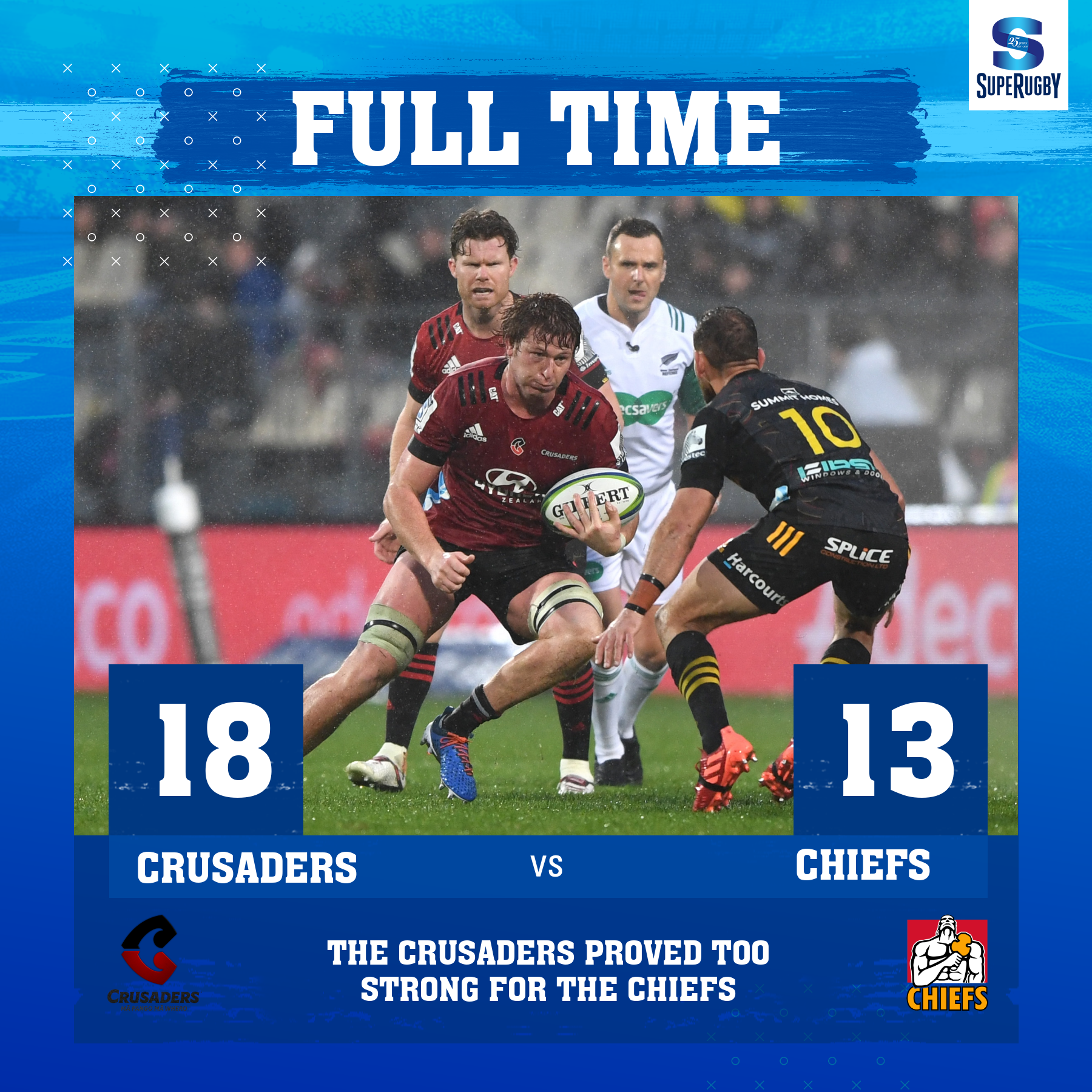