Crusaders March On Against Blues

Winger George Bridge grabbed four tries as the Crusaders romped to a 54-17 victory over the Blues at AAMI Stadium in Christchurch.

Tries from Sam Whitelock, Seta Tamanivalu, Bryn Hall, a Jack Goodhue brace and four from Bridge proved far too much for the Blues who scored through a penalty try and a Melani Nanai double.

The Crusaders began the match on the front foot, taking the game to the game to the Blues with superb interplay between forwards and backs before Ryan Crotty released Goodhue through the gap - the centre profiting from some sloppy defending to dot down for the game's opening try.

The Blues would dominate possession and territory for the remainder of the half, but were unable to convert this dominance in to points due to both some stubborn Crusaders defending and wasteful finishing on their part.

The Crusaders, in contrast, were more incisive. Some flat passing and good depth of running from the Crusaders exposed the Blues' width on defence as Bridge sailed in for his side's second in the 22nd minute as Richie Mo'unga added the extras this time for a 12-0 lead.

Ten minutes before half-time and against the run of play, Nanai intercepted Israel Dagg's pass to run 30 metres to the try-line and bring the Blues back to within a converted try of the defending champions at 5-12.

Some relentless pressure from the Crusaders got them over on the stroke of half-time as Mitchell Drummond made the sniping break before finding Tamanivalu with the offload. Mo'unga converted as the hosts took a 19-5 lead in to the interval.

The Crusaders extended their lead three minutes after the interval. A well-worked driving maul drew the Blues' defenders, leaving them exposed when the ball was spun out wide with Goodhue going through a gaping gap for his brace.

But the Blues claimed a psychological victory in the 51st minute when referee Federico Anselmi awarded them a penalty try after a dominant scrum making it 26-12.

Soon afterwards, the deficit was nine as Nanai grabbed his brace with a spectacular finish in the left-hand corner after fly-half had thrown the long pass, leaving the winger to do produce an acrobatic one-handed finish despite the attentions of Dagg.

Having struggled to be as free-flowing as they were in the second half, the Crusaders sparked to life in the 63rd minute when Tamanivalu's injection of pace broke the line with Crotty the link between him and Bridge, the latter dotting down for his double as Mo'unga slotted the conversion between the posts for a 33-17 lead.

Bridge then grabbed his hat-trick with six minutes to go after Jack Goodhue had done brilliantly to evade Murphy Taramai's tackle in midfield before playing the long, wide pass to Bridge, who cut inside for a nice finish.

Captain Sam Whitelock got in on the act when he busted Akira Ioane's tackle and sprinted 10 metres to crash over. The icing was on the cake when Brige brought up the 50 by grabbing his fourth. 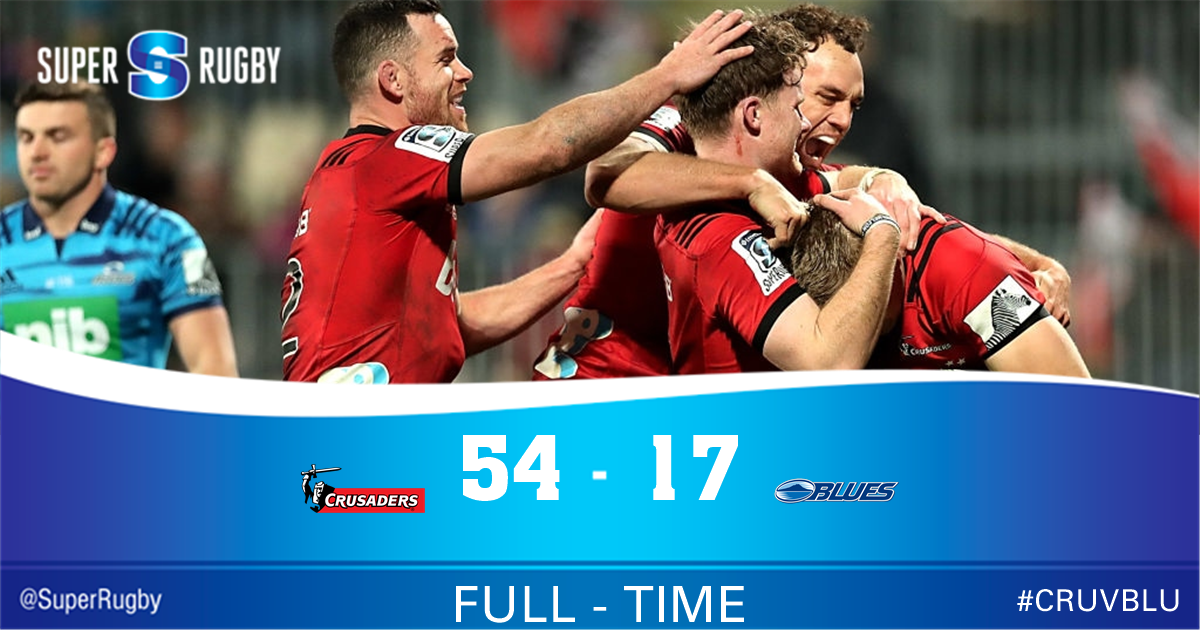