Crusaders put 50 past the Waratahs in eight-try Wollongong romp

The Crusaders showed their class as they thumped the Waratahs 54-28 in Saturday's opening Super Rugby Trans-Tasman clash at the WIN Stadium in Wollongong.

While the home side acquitted themselves pretty well in the opening half-hour to find themselves just one point down, the Crusaders hit their straps and pulled away with three tries in the final 10 minutes of the half.

Despite a brief second-half resurgence, there would be no way back for the Tahs from there, as the visitors crossed for four more five-pointers after the break to seal the convincing win.

The Crusaders opened the scoring after just eight minutes when a linebreak from Sevu Reece sent Will Jordan away, with the fullback drawing in the last defender before offloading to Mitchell Drummond for the try.

But the Waratahs stayed pretty competitive for much of the first half despite losing Jack Whetton to a yellow card, as two penalties from Will Harrison kept them in the contest.

It was always going to be tough for the Tahs with a man down, however, and when they kicked the ball away once too often, the Crusaders made them pay with a superb counter-attack down the left-hand side of the field, with the ball going through several hands as they ran all of 80 metres for a fantastic team try, with hooker Codie Taylor eventually touching down.

And having kept the Crusaders contained for so long, the danger signs increased for the Waratahs when Reece ran straight through a gap in the defence for the simplest of tries after they made their way back into the opposition 22.

Harrison added three more points for the Tahs to reduce the deficit somewhat, but it was all too easy for the Super Rugby Aotearoa champs as they crossed for their fourth five-pointer on the stroke of half-time, moving the ball outside and then inside again and leaving the Tahs at sixes and sevens as Dallas McLeod ran over unopposed.

The Crusaders started the second half precisely where they left off, as captain Scott Barrett crossed for try number five after a great linebreak from Richie Mo'unga put them straight back on the front foot.

Having shipped four tries in the space of 15 minutes, the Waratahs desperately needed a response, and they found it on 51 minutes as Jack Maddocks finally crossed the whitewash from the back of a five-metre scrum after a lengthy period of attack inside the Crusaders 22.

And the men from New South Wales didn't stop there, as they went straight back on the attack after Crusaders replacement Oliver Jager was yellow-carded for repeated team infringements, leading to a fantastic score for Izaia Perese, who ran straight over Leicester Fainga'anuku to score the Tahs' second try in the space of a few minutes and bring them back to within 10 points.

But in typical Crusaders fashion, the visitors hit straight back as Fainga'anuku responded with a try from close quarters, having just come off second best at the other end of the field moments earlier.

And hopes of a genuine Waratahs comeback were dashed 15 minutes from time as the Crusaders crossed the whitewash again via Bryn Hall from a line-out drive to re-establish the big lead they'd built up at the start of the second half.

And there was time for one more try from Will Jordan in the corner as the Crusaders brought up their half-century with five minutes to go.

There was a late yellow card for David Havili as he cynically knocked down a Waratahs pass inside his own 22, which eventually led to a consolation try for Alex Newsome in the corner after the ball was quickly shifted wide, giving the home fans something to smile about as the final hooter sounded. 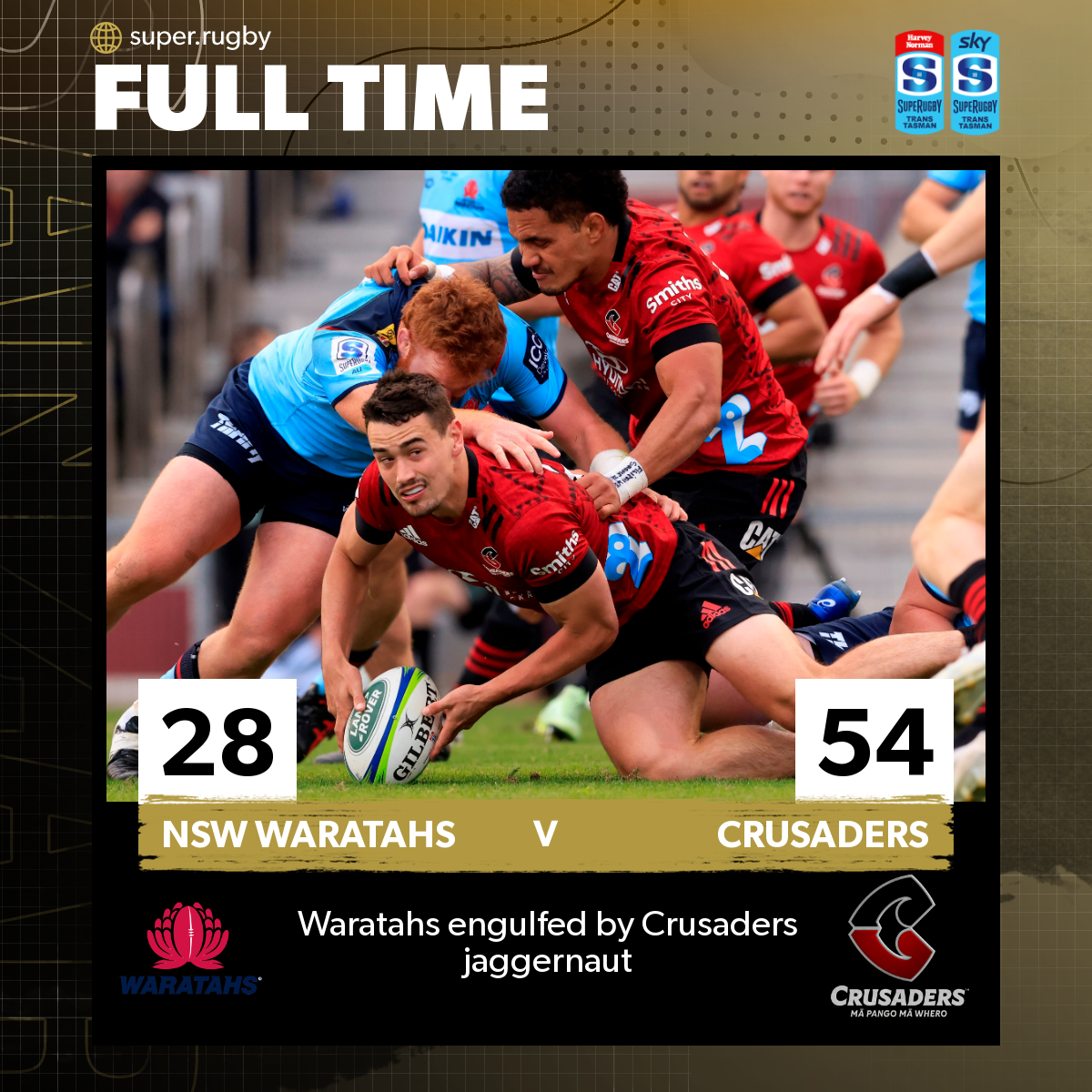