Crusaders put the Sunwolves to the sword

Defending Super Rugby champions the Crusaders cruised to a 49-14 bonus point win over the Sunwolves in Brisbane on Saturday.

Although the champions were deserved winners, they were made to work hard for the five points and they will be disappointed with their discipline after Hugh Roach was red carded for foul play late in the second half.

In the end, the Crusaders outscored the Sunwolves by seven tries to two with Sevu Reece (2), Tom Christie, Luke Romano, Sione Havili, Braydon Ennor and Fergus Burke all crossing the whitewash. Their other points came courtesy of five conversions from Brett Cameron and Burke also added a couple of two-pointers off the kicking tee.

For the Sunwolves, Ben Hyne and Garth April scored tries which were both converted by April.

The opening half was tightly contested and although the Crusaders had most of the possession, they committed several unforced errors and were frustrated by a solid defensive effort from their opponents.

After a lengthy spell camped inside the Sunwolves’ half, the champions opened the scoring midway through the opening half courtesy of Christie’s try, after Ennor and George Bridge combined brilliantly in the build-up.

Cameron added the extras but the Crusaders failed to kick on and on the half-hour mark the Sunwolves struck back when Hyne went over for their first try, from close quarters.

Five minutes later, the Crusaders were on the attack deep inside the Sunwolves’ 22 and Reece rounded off after gathering a perfectly weighted long pass from Bridge which meant the men from Christchurch were leading 14-7 at half-time.

The Crusaders made a terrific start to the second half when Romano crossed for their second try, after a barnstorming run from Leicester Faingaanuku in the build-up.

That score did not deter the Sunwolves, however, as they remained competitive and tested the Crusaders’ defence on several occasions as the half progressed. They were rewarded in the 55th minute when April went on a mazy run just outside the champions’ 22 and beat three defenders before scoring his side’s second try which he also converted.

The Crusaders did not panic, however, and converted tries from Reece and Havili in quick succession meant they held a 35-14 lead by the 65th minute.

All that good work was undone two minutes later when Roach received his marching orders, after he elbowed Hencus van Wyk in his face, and they were reduced to 13 men soon after when Reece was yellow carded for a deliberate knock down close to his try-line.

Despite those setbacks, the Crusaders finished stronger and sealed their win with late tries from Ennor and Burke in the game’s closing stages. 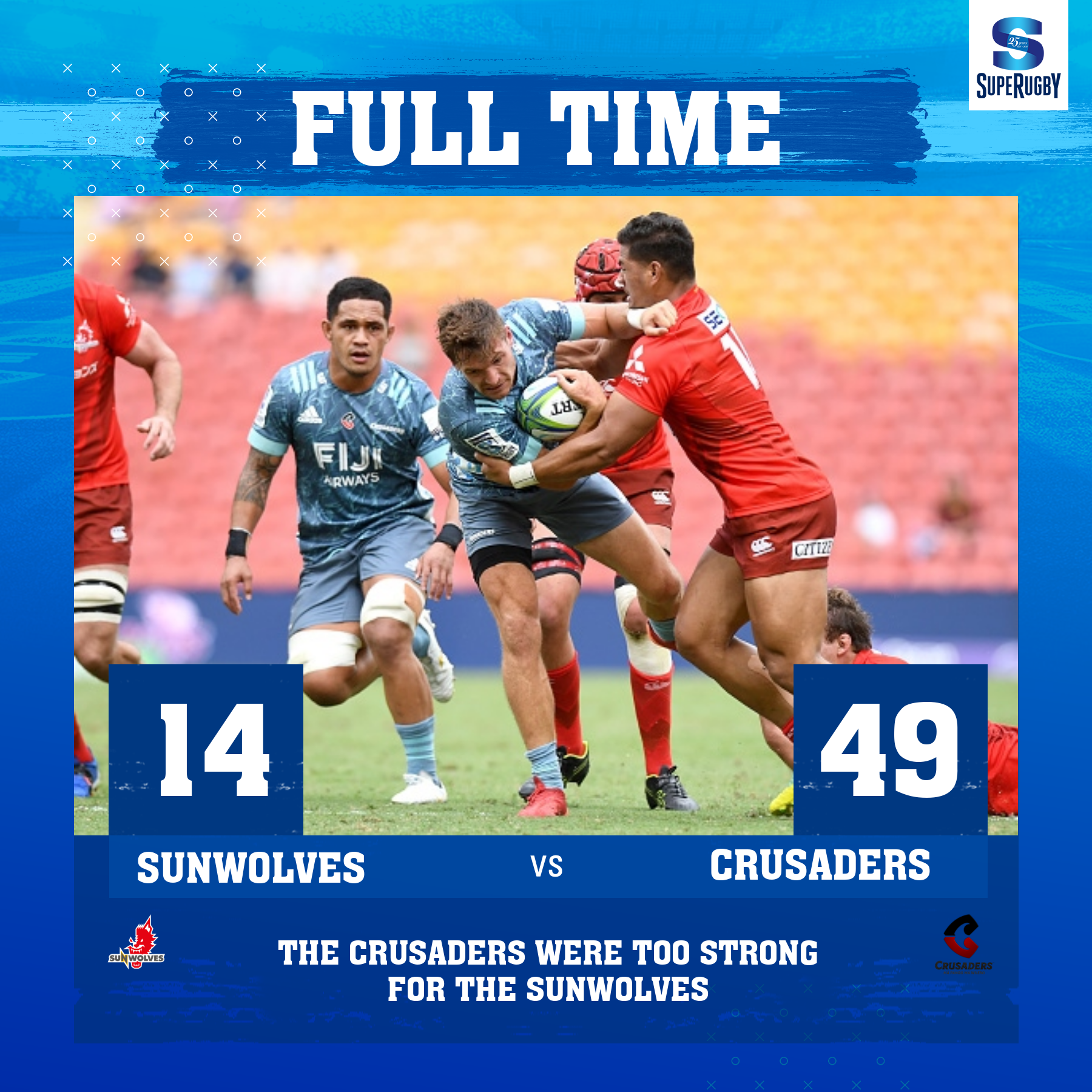