The Crusaders were made to work hard but got the job done as they secured a 32-22 victory over the Highlanders in Christchurch on Sunday.

As expected, this was an entertaining contest characterised by plenty of thrilling action throughout and the Crusaders were full value for their win although they had to come from behind to beat their visitors.

In the end, they outscored the Highlanders four tries to three with George Bridge leading the way with a brace of five-pointers and Richie Mo’unga and Braydon Ennor also crossing the whitewash. Mo’unga eventually finished with a 17-point haul after also adding three conversions and two penalties.

For the Highlanders, Shannon Frizell, Jona Nareki and Michael Collins scored tries and Josh Ioane succeeded with two conversions and a penalty.

The win means the Crusaders clinch the Super Rugby Aotearoa title despite having one more match to play against the Blues in Auckland next week.

The visitors made a fantastic start and just two minutes into the match they opened the scoring when Aaron Smith found Frizell with a well-timed pass deep inside Crusaders territory, before the All Blacks flanker powered his way through two tackles on his way over the try-line.

Ioane’s conversion gave the Highlanders a 7-0 lead and they continued to hold the upper-hand during the next 10 minutes, spending most of that time camped inside the home side’s half.

The Crusaders soaked up the early pressure but flicked the switch in the 13th minute and were rewarded with an outstanding try from Mo’unga.

This, after Bryn Hall found Sevu Reece with a delightful long pass on the Crusaders’ 10-metre line and Reece did well to throw an inside pass to Hall, who got the ball out to Bridge just outside the Highlanders’ 22. He offloaded to Mo’unga, who raced away before scoring under the posts.

Despite that score, the Highlanders remained competitive and regained the lead in the 22nd minute courtesy of a penalty from Ioane. Soon after, they extended that lead when Nareki gathered a stray pass from Sam Whitelock close to the halfway line before outsprinting the cover defence on his way over the try-line.

Ioane added the extras before Mo’unga reduced the deficit to seven points when he landed a penalty just before the half-hour mark.

The opening half’s closing stages were frantic as the Crusaders hammered away at the Highlanders’ try-line but they were met by a resilient defensive effort from the opponents.

In the end, the visitors were blown up for offside play and Mo’unga slotted the resulting penalty which meant the match was evenly poised with the Highlanders leading 17-13 at half-time.

The thrilling nature of the game continued after the break with both sides continuing to run the ball from all areas of the field.

In the 46th minute, Mo’unga launched an attack from just inside his half and he was soon midway between the halfway line and the Highlanders 22 where he got the ball out to Will Jordan. The full-back offloaded to Hall, who was cruising in over the try-line but it wasn’t to be as Josh McKay knocked the ball from his grasp as he was crossing the whitewash.

That proved costly as the Highlanders went further ahead in the 54th minute when Collins crossed for their third try after running onto a pass from Mitch Hunt deep inside the Crusaders’ half.

The Crusaders needed a response and that came courtesy of tries in quick succession from Bridge midway through the half. He rounded off the first one after good work from Jack Goodhue and Jordan and his second one came in similar fashion after Luke Romano, Mo’unga and Jordan combined brilliantly in the build-up.

Mo’unga succeeded with one conversion which meant the hosts were up 25-22 and leading for the first time in the game and the Highlanders were dealt a further blow when Sio Tomkinson was yellow carded for taking Oli Jager out with a shoulder charge off the ball just before Bridge’s second try.

In the 75th minute, the Crusaders sealed their win when Mitch Drummond launched an attack off the back of a lineout drive deep inside the Highlanders’ half. He got a pass out to Mo’unga, who offloaded to Ennor and the centre hit the line at pace before rounding off in style. 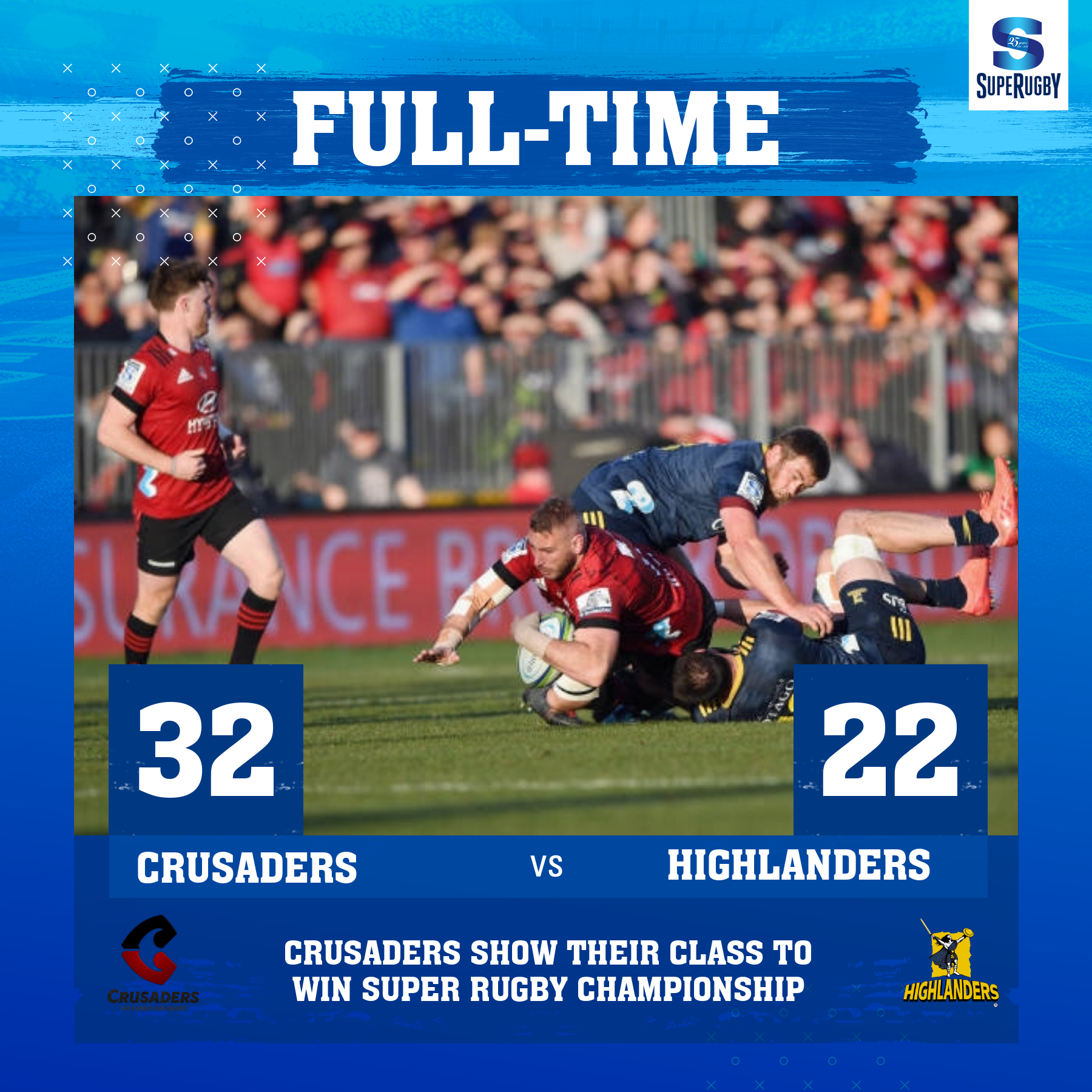