The Crusaders were made to work hard by the Sunwolves but ran out winners 33-11 in terrible conditions at AMI Stadium.

The game was very scappy, in part due to the torrential rain, with errors aplenty making for a stop-start encounter.

Jamie Joseph and Tony Brown will be delighted with their sides' defensive resilience in a determined display against the defending champions.

However, there will still be concerns about the line-out, which had seen them win only 79 percent of their own throws prior to the game.

The Crusaders opened the scoring with less than a minute on the clock. After Sunwolves fly-half Hayden Parker didn't find touch with his clearance kick, the ball was shifted from left to right where Crusaders fly-half Mike Delany made the clean break, thanks to non-existent Sunwolves defending, before spinning the long pass out wide for inside centre Ryan Crotty, who had an easy finish on the overlap. Delany converted for a 7-0 lead.

The second came eight minutes later through an extremely dominant driving maul with flank Matt Todd revealed as the try-scorer after emerging from the pile of bodies. Delany added the extras.

However, the Sunwolves were not going to lie down and started playing some of their best rugby of the season. Winning advantage after advantage and taking the ball through 15 to 20 phases, saw the less-fancied Japanese outfit rewarded with a try in the 14th minute when number 12 Michael Little produced an acrobatic finish in the left-hand corner.

The visitors continued to defy the odds, enjoying 63 percent possession and 68 percent territory in the first 20 minutes, yet could only muster one try for their efforts in the opening quarter.

Normality resumed as the Crusaders gradually began to reassert their control over the game. However, the defending champions were uncharacteristically wasteful, not converting their overwhelming dominance of the territorial stakes in the last 15 minutes of the first half.

This favoured the Sunwolves as the Crusaders were unable to get any momentum going and the visitors would have been delighted that they managed to thwart the Crusaders with some brilliant defending and go in to the interval trailing at just 14-5.

The Sunwolves had the first points of the second half courtesy of a 43rd-minute Parker penalty, reducing the deficit to just six at 14-8. Soon after, the difference was just three after the away side won a penalty at their five-metre attacking scrum straight in front which meant an easy penalty for Parker to make it 14-11 after 50 minutes.

The Sunwolves, however, weren't able to maintain the same level of intensity. A piece of individual brilliance from Crotty when he stepped back on the inside of a scrambling defence, earned the hosts' their third try with 56 minutes gone. Delany's conversion made it 21-11.

The bonus point try came through Manasa Mataele, who grabbed his fifth try of the season, running clean through after Tim Bateman produced a superb inside offload-pass to create the score. This time, Delany pulled his conversion wide as the score remained 26-11 in favour of the Crusaders.

A slightly stuttering victory was finished off with a fluid backline move as Jack Stratton grabbed a try on debut - a moment the young scrum-half will never forget - and a fitting end to the game. 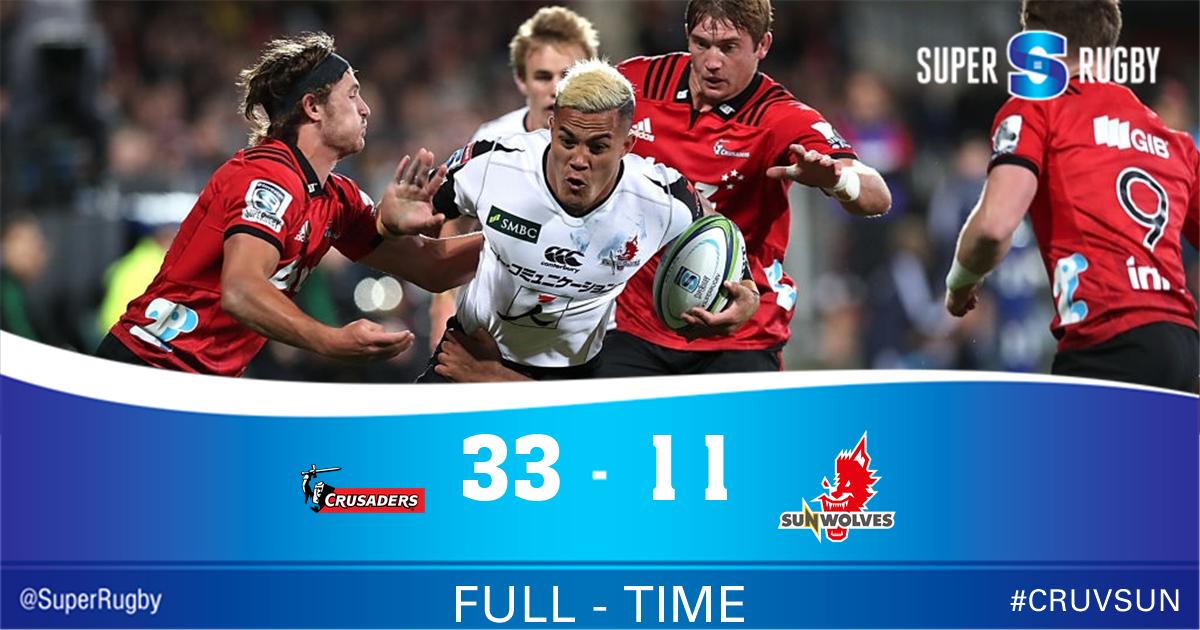