The Crusaders stunned the Highlanders with two tries at the death to ultimately seal a dominant 40-20 win at the Forsyth Barr Stadium in Dunedin.

One of the best matches the Super Rugby Aotearoa competition has delivered to date, the tone was set in the initial exchanges when Richie Mo’unga’s penalty and Will Jordan’s try saw the visitors open up an eight-point buffer.

They were met by an equally impressive Landers outfit, though, as tries from Shannon Frizell and Ngane Punivai put the home side in front before Mo’unga equalised with successive efforts off the tee.

Mitch Hunt would kick the Highlanders ahead at the end of the first half before Tom Christie continued the topsy-turvy nature of the contest by crossing the whitewash after the break.

Hunt reduced the arrears with yet another successful three-pointer but Sevu Reece’s score in the 60th minute and Christie’s second try three minutes from time secured a third win for Scott Robertson’s charges and saw them go top of the table. Jordan followed them by going over in the final minute to complete what appeared to be a comfortable victory in Dunedin, yet it was anything but.

Aaron Mauger’s men were hugely impressive in their Aotearoa opener against the Chiefs, claiming a dramatic 28-27 triumph before they almost stunned an in-form Blues side a week later.

This, against the best team in the southern hemisphere over the past three years, was another level up, however, and they were under duress early on in Dunedin.

The Crusaders were dominant at the scrum and duly controlled possession, probing a Highlanders rearguard that initially remained stout.

Mauger and his coaches have evidently done some excellent work during the enforced break, but the pressure was too great and a Mo’unga penalty was followed by Jordan’s try.

At 8-0 in arrears versus the defending Super Rugby champions, the hosts had to respond and they did just that via the outstanding Frizell, who barrelled through several would-be tacklers and surged across the whitewash.

It was the tonic they needed and moments later the Landers were over the line again. This time, Aaron Smith was the inspiration, taking a loose ball at the back of a lineout and scything through the heart of the opposition rearguard. The ball was then shifted wide and Punivai was on hand to touch down.

All of a sudden, the Saders were the team playing catch up, but they responded in typical fashion to level matters via a pair of Mo’unga three-pointers.

Hunt took the Highlanders back in front at the interval, but they were forced on to the back foot in the early stages of the second period. The Christchurch outfit found their rhythm with Jordan, Mo’unga and David Havili all contributing plenty in attack.

In the end, Havili made the decisive action by breaking through and getting to within inches of the line. His support player was taken out and no doubt it would have led to a penalty try and a yellow card for the hosts had Christie not gone over in the next phase.

Back came the hosts, however, who strung together a superb piece of play. Stunning off-loads from Pari Pari Parkinson and Frizell sent the Saders defence into reverse and opened the space out wide.

When the ball reached Jona Nareki, they had a three on one, but the wing bizarrely delayed his pass and the move broke down. They had the consolation of a Hunt penalty to reduce the deficit but that error proved costly as their South Island rivals extended their buffer when Reece crossed in the right-hand corner.

Christie and Jordan then touched down in the final three minutes to complete the win, but those late scores were cruel on a spirited and skillful Highlanders side. 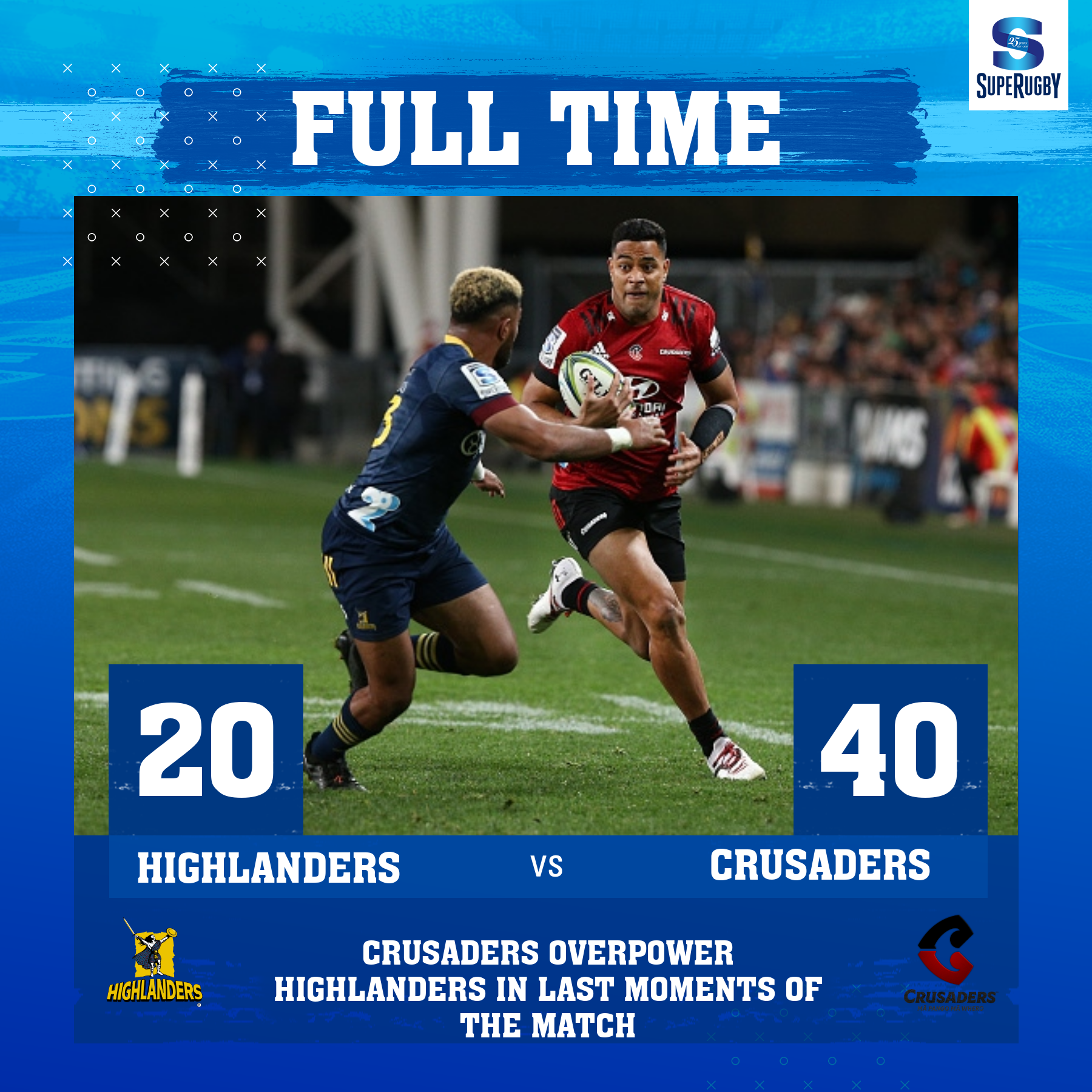