Crusaders Too Good for Spirited Chiefs

The Crusaders continued where they left off in 2017 when they claimed a hard-fought 45-23 win over the Chiefs in Christchurch.

In a typical New Zealand derby, both sides ran the ball from all areas of the field but in the end the tournament's defending champions' class shone through and they eventually outscored their visitors seven tries to two.

Although the Chiefs were under the cosh for large periods, they did well to fight back after trailing their hosts 19-3, and even took the lead midway through the second half. But the Crusaders finished stronger in the final quarter and scored 21 unanswered points during that period.

The early exchanges were evenly contested although the Crusaders drew first blood in the sixth minute when Matt Todd dotted down from close quarters after Bryn Hall was initially stopped just short of the try-line.

Richie Mo'unga failed with the conversion attempt but in the 13th minute he would get his name onto the scoresheet when he crossed for his side's second try. This, after a loose ball was kicked ahead by Ryan Crotty and Mo'unga gathered it inside the Chiefs' 22 before dotting down.

Mo'unga added the extras before Damian McKenzie opened the Chiefs' account via a penalty in the 18th minute. Midway through the half, the Crusaders were reduced to 14 men when Mo'unga was yellow carded for a professional foul at a breakdown close to his try-line.

The Chiefs failed to capitalise on their numerical advantage although the Crusaders had a chance to increase their lead in the 27th minute but David Havili was off target with a penalty attempt.

That did not prove to costly, however, as on the hour-mark Jordan Taufua crossed for their third try after the ball was taken through 12 phases in the build-up.

The Chiefs seemed shellshocked but three minutes later they struck back with a superb try from Sam Cane. The All Black flanker gathered a pass from McKenzie, just inside the Crusaders' half, before setting off towards the try-line. Cane then sold George Bridge a beautiful dummy before powering his way over the try-line.

Shortly afterwards, the Crusaders were dealt another blow when Michael Alaalatoa was sent to the sin bin for a dangerous tackle on McKenzie.

This time the visitors took advantage of their superior numbers and just before half-time, Mckenzie got a pass out to Solomon Alaimalo, who shrugged off a couple of defenders before crossing for the visitors' second try.

McKenzie converted that try which meant the match was evenly poised with the Crusaders leading 19-17 at the interval.

The second half started more cautiously and we had to wait until the 57th minute for the opening points of the half when McKenzie succeeded with his second penalty.

This meant his side took the lead with the score 20-19 but the Crusaders would soon be back in front.

The men in red in black showed why they are the champions when, after a superb line break from Jack Goodhue, the ball was shifted to Sam Whitelock inside the Chiefs' 22 and the Crusaders captain showed great determination and leg drive as he dotted down with two defenders on his back.

The visitors struck back shortly afterwards when McKenzie added his third penalty - a long range effort from 48 metres out - but that Whitelock try seemed to reinvigorate the Crusaders who finished the half stronger.

In the 71st minute, they were awarded a penalty try when Crotty was stopped just short of the line by a dangerous tackle from Lachlan Boshier which also resulted in a yellow card for the Chiefs flanker.

And the champions secured the result with two intercept tries from Bridge and Mataele in the game's closing stages. 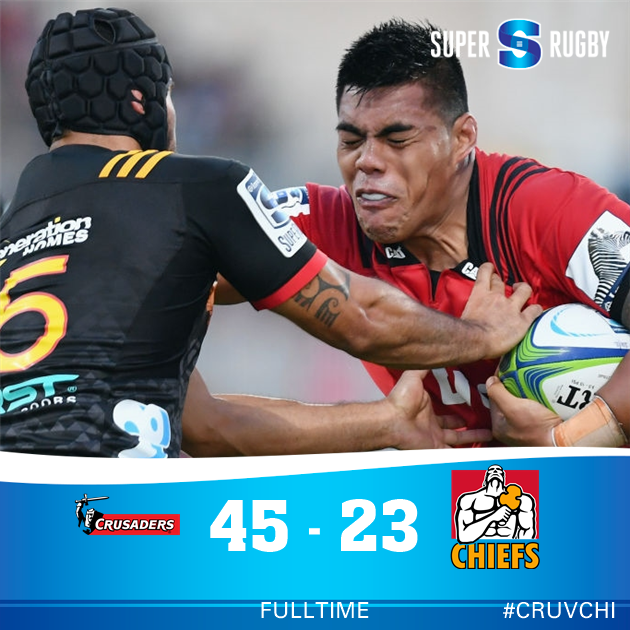