Crusaders too strong for Blues in Auckland

Richie Mo'unga produced another virtuoso performance as he scored 28 points to guide the Crusaders to a 43-27 victory over the Blues at Eden Park on Sunday.

The 'Saders have now notched up 13 straight wins against the men from the capital and got on the try column through Jack Goodhue, Codie Taylor, Mo'unga, while the hosts scored through Blake Gibson, Kurt Eklund (2) and Hoskins Sotutu.

Mo'unga did not miss a single kick as he racked up five penalties and four conversions to go with his try.

Both teams were trying to play with ball-in-hand in the early stages, which led to a couple of errors and turnovers.

The home team put on a massive scrum and they won the penalty. Otere Black booted the ball to the corner. The Crusaders defended the lineout expertly, winning possession, and mauling to their 22. They did not, however, clear and the Blues won a kickable penalty in front of the posts and Otere Black opened the scoring for the hosts.

The Crusaders won a penalty of their own from the lineout. Mo’unga kicked to the corner. Taylor broke from the rolling maul and carried towards the goal line. Bryn Hall stabbed a grubber behind the defence and Goodhue beat Akira Ioane to the bouncing ball to score.

The Blues responded with a try to edge in front. Gibson took Caleb Clarke’s forward-pass and scored in the corner to cap off a scintillating counter-attack after the Crusaders lost possession near midfield.

In the 32nd minute, the 'Saders restored their lead. Taylor, with the help of some backline players, controlled the ball at the back of the driving maul before flopping over the try line for his fourth score of the season and 21st Super Rugby try.

Eight minutes after the interval, Eklund made up for his earlier mistake with a powerful drive over the whitewash, scoring his second try of the season.

Mo'unga then slotted three successive penalties in the 52nd, 56th and 60th to put the visitors 29-15 in front.

Scott Robertson's side scored their third try in the 69th minute. It was that man Mo’unga, who switched the attack and slipped through Eklund’s desperate tackle to dot down.

Sotutu kept his team in the game with a stunning score after the restart and Harry Plummer added the extras to make it 27-36.

But all hopes of a Blues' comeback were extinguished in the 79th minute when Reece went over in the corner shortly after Ofa Tu'ungafasi, who signed a new contract at the Blues this week, was yellow carded. 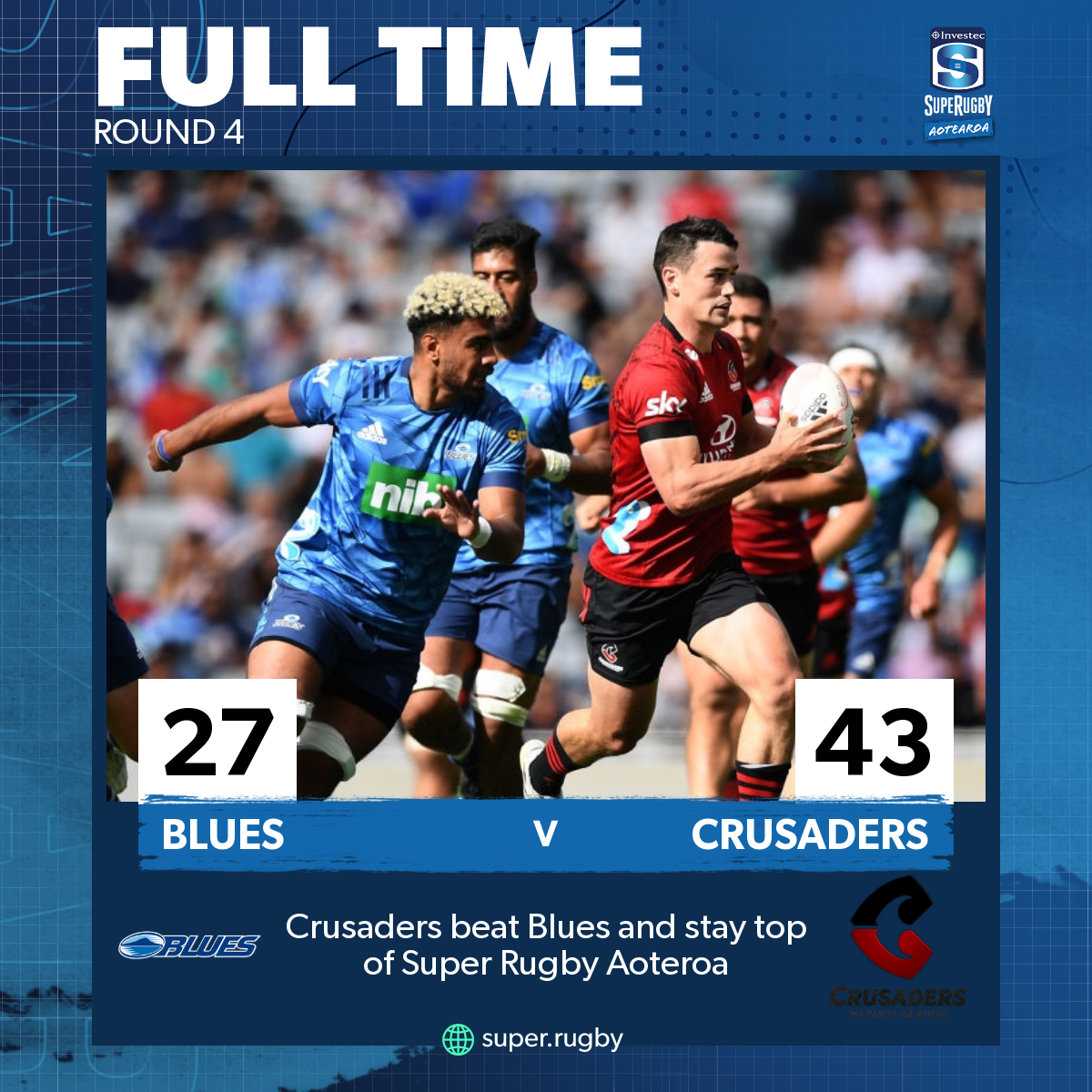