Crusaders too strong for the Bulls

The Crusaders ended a two-match losing streak with a comfortable 33-14 victory over the Bulls at AMI Stadium in Christchurch on Friday.

After their derby defeats to the Hurricanes and Highlanders, the defending champions bounced back here with a solid performance.

It means the Crusaders have lost just once to the Bulls in Christchurch in the first match played between the two sides in 1996. The men from Christchurch have now won their last 11 in a row at home.

The persistent rain throughout made handling difficult, with the Crusaders definitely handling the conditions the better of the two sides in their own backyard.

The Bulls made too many errors while they did not convert their chances whereas the Crusaders were ruthlessly clinical, coming away with points every time they got in to the end-zone.

The Bulls began on the front foot, taking the game to their more-fancied opponents. After the Bulls had won a scrum penalty, Handre Pollard's kick to touch eight metres out gave them a genuine chance. The Crusaders were then penalised for not rolling away. Once again, Pollard opted for touch, a sign of the attacking enterprise of this new-look Bulls outfit.

After the Crusaders had given away four penalties in a row and referee Federico Anselmi had warned Crusaders captain Sam Whitelock about his side's repeated infringements, the Bulls yet again opted not to take the three points which would come back to haunt them as the Crusaders would force a penalty off another predictable Bulls' driving maul from the lineout.

92 percent possession and territory after the first 12 minutes had come to nothing for the Bulls, something coach John Mitchell would be bitterly disappointed with. 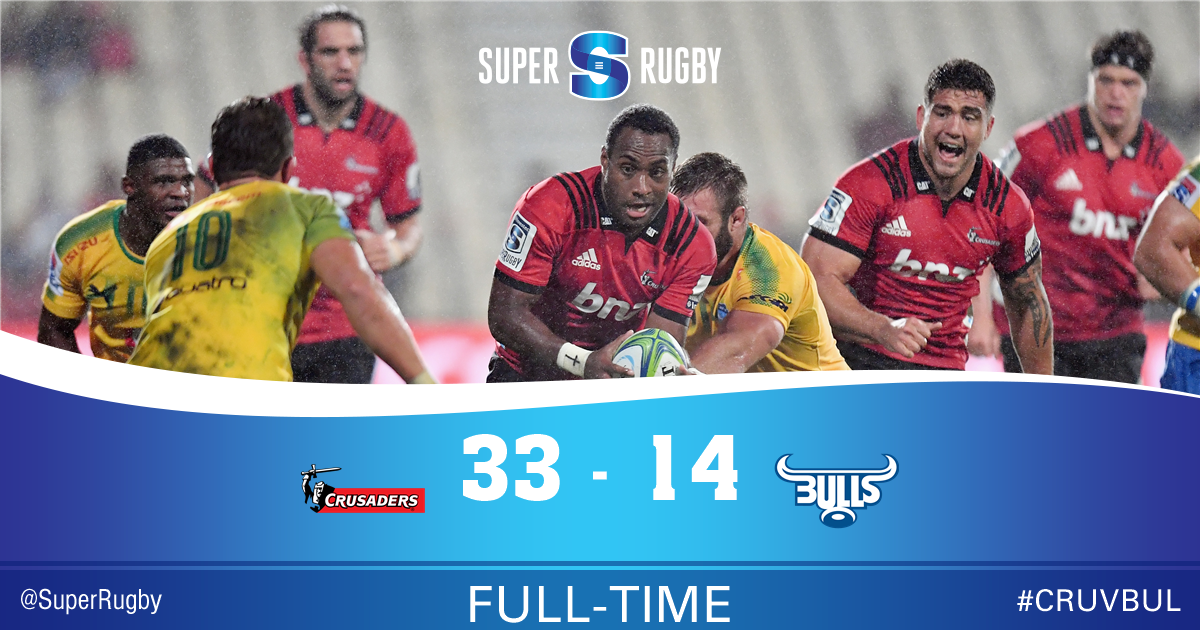 In contrast, the Crusaders scored with their first sojourn upfield and it came from a turnover before they kicked the ball ahead with Warrick Gelant having no choice but to put the ball in to touch. From the lineout, they set up the driving maul which rumbled over as Scott Barrett eventually emerged with the ball from the pile of the bodies. Mitchell Hunt made no mistake with the conversion as the Crusaders took a 15th-minute 7-0 lead.

Anselmi lost his patience with the Crusaders for their repeated indiscretions when Tim Perry was yellow-carded for a high hit. Despite their numerical disadvantage, it was the Crusaders who scored next and extended their lead.

In almost identical fashion to the first, the Crusaders turned over, kicked the ball upfield and left Gelant no exit plan which forced him in to touch. From the resulting lineout, Codie Taylor broke off the back of the driving maul to power his way past a couple of defenders and over. Despite having only 30 percent possession and territory, the Crusaders showed just how ruthless they can be at 14-0 up with 14 men.

The Bulls, however, had an instant response and it came on the half hour mark from an attacking scrum 20 metres out. Bulls winger Travis Ismaiel was first receiver and scythed his way past three defenders to cap off a magnificent individual effort, halving the deficit and bringing the Bulls well and truly back in to the game.

However, the 'Saders had the last laugh of the first half as centre Jack Goodhue showed a strong leg drive to somehow power his way past both Bulls prop Pierre Schoeman and number eight Tim Agaba from close range. Hunt added the extras as the hosts took a 21-7 lead in to the interval.

The Crusaders were converting every time they went in to the Bulls' end-zone. After the visitors conceded a penalty, Hunt kicked an excellent touch finder. The Crusaders' maul was successfully halted by the Bulls this time but as the ball was recyled right, Goodhue ran a lovely angle to find the gap between two Bulls defenders and dot down for his brace. Hunt's conversion made it 28-7 with half an hour to go.

Having managed to win the penalty, the Bulls worked the ball off the lineout drive. Marco van Staden was not held in the tackle, got up and ran 15 metres to the line before diving over. Pollard's conversion meant the Bulls trailed 28-14 with ten minutes to go.

Two minutes later, the Crusaders had worked their way close to the Bulls' try-line before Hunt put in the cross-field kick. Manasa Mataele competed well in the air, knocking it backwards with George Bridge the first to pounce on the ball. The finisher still had plenty to do as he writhed his way past numerous defenders before producing the one-handed finish.

Hunt missed the conversion but it mattered little as the defending champions closed out the match comfortably.