The Crusaders consolidated their position at the top of the Super Rugby table with a 36-14 victory over the Brumbies in Christchurch on Saturday.

The champions were made to work hard for their win as they were trailing 7-0 at half-time but they delivered a much improved second half performance which paved the way to their bonus-point victory.

Sevu Reece and Will Jordan scored a brace of tries apiece for the Crusaders and Jordan Taufua also crossed the whitewash while Richie Mo’unga added three conversions and Brett Cameron slotted a penalty and a conversion.

Christian Lealiifano led the way for the Brumbies with a try and two conversions and Tevita Kuridrani also scored a five-pointer. The visitors’ discipline let them down, however, and they had to play with 14 men for 20 minutes after Toni Pulu and Sam Carter were sin binned for dangerous tackles in the second half.

The teams cancelled each other out with excellent defensive efforts during the first half and neither side managed to score any points during the opening half-hour.

The visitors came close to scoring in the 27th minute when Murray Douglas went over the try-line but his effort was disallowed when television replays revealed that he lost possession while crossing the whitewash.

The Crusaders were reduced to 14 men in the 28th minute when Owen Franks was yellow carded for a shoulder charge on Henry Speight. Five minutes later, the Brumbies made their numerical advantage count when Lealiifano stepped past a couple of defenders before crossing for the opening try.

The Crusaders came out firing in the second half and four minutes after the restart Reece gathered a pass from Ryan Crotty before crossing for side’s opening try which was converted by Mo’unga.

The champions’ confidence grew as the half progressed and they were rewarded when Jordan dotted down 10 minutes later despite a dangerous tackle around his neck from Pulu, who was yellow carded for the offence.

Three minutes later, Jordan crossed the whitewash again after taking a tap penalty deep inside Brumbies territory and things went from bad to worse for the visitors in the 66th minute when Carter was also sent to the sin bin for a head-high tackle on Crotty.

The Crusaders dominated the game’s closing stages and were rewarded with further tries from Reece and Taufua before Kuridrani scored a late try for the visitors. 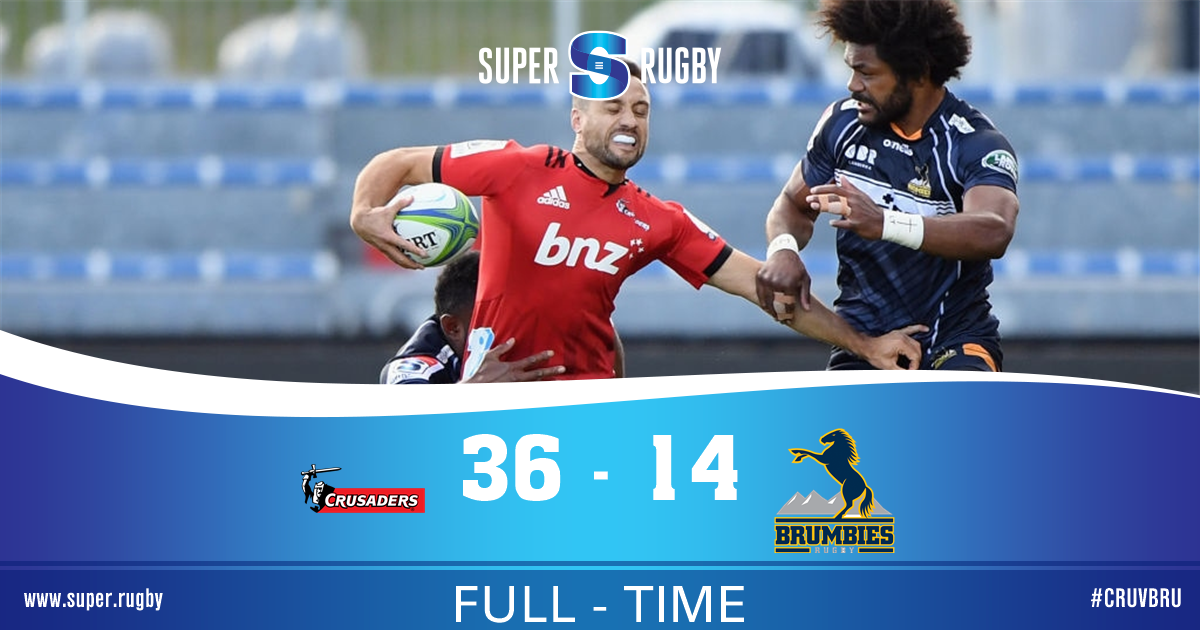