Crusaders win a thriller against the Blues

The Crusaders came from behind to maintain their one hundred percent record in Super Rugby Aotearoa thus far following a 26-15 triumph over the Blues in Christchurch.

Between the current top two sides in New Zealand, it was unsurprisingly a superb encounter full of physicality and high quality skills. The North Island-based team began the better and deservedly went ahead through Mark Telea’s converted try, but the ‘Saders responded via a brace of Richie Mo’unga penalties.

Otere Black and Mo’unga then traded three-pointers before Rieko Ioane touched down to extend the visitors’ lead. However, the 10-time Super Rugby champions displayed their class in the third quarter to cross the whitewash twice through Mitchell Drummond and Will Jordan to seal the victory.

It ended the Blues’ seven-match winning streak while the Crusaders stretched their lead in the table to six points.

The Aucklanders have struggled over the years against their great rivals having not defeated the ‘Saders since 2014.

From being the standard-bearers in Super Rugby, after claiming the first two titles upon the tournament’s inception, they were soon usurped by the South Islanders.

The Crusaders have ultimately dominated the contest since the mid-2000s but there is an extra belief in this Blues outfit nowadays and they were resilient throughout on Saturday. Following a positive run of results earlier in the year before the season was suspended, Leon MacDonald’s men have built on that and went into this game with real confidence.

That was particularly shown in the early stages as the visitors controlled possession and kept the ‘Saders on the back foot. Two players who have recently signed new contracts, Hoskins Sotutu and Telea, were prominent as they opened the scoring.

Number eight Sotutu initially went close by charging towards the line and, although he was held up, from the resultant five-metre scrum, Black found Telea to finish brilliantly out wide.

It was the ideal start, especially when Black nailed a difficult conversion, but unperturbed the ‘Saders attempted to hit back.

For the rest of the half, Scott Robertson’s charges dominated territory and initially searched for a response by kicking to the corner, but the Blues’ defence was hugely impressive. The Aucklanders’ discipline was not, however, and a series of infringements enabled the Christchurch outfit to remain in the ascendancy.

Eventually, the away side were breached, but only via a pair of Mo’unga penalties as MacDonald’s men took a one-point advantage into the break.

To the visitors’ credit, they began well in the second period and added to their lead through Black, but Mo’unga almost immediately cut the deficit with a third effort off the tee.

The game was in the balance but then a came a potentially decisive moment as the North Islanders were awarded a five-metre scrum, despite Harry Plummer appearing to knock on. They duly benefited when centre Ioane was afforded the space to cross the whitewash from close range.

That decision evidently irked the hosts and they channelled it in the right way. Braydon Ennor led the response by blocking Black’s simple conversion before Crusaders fly-half Mo’unga both kicked and superbly recollected the restart.

The men from Christchurch had ramped up the intensity and their opponents could not cope as George Bridge charged down the left and sent Drummond over. Mo’unga, whose pass had given Bridge the space he needed to set up the scrum-half, converted to take them ahead for the first time in the match before the pivot added a fourth three-pointer to extend their buffer.

Momentum was now very much with the Crusaders and they secured the win late on through the in-form Jordan. 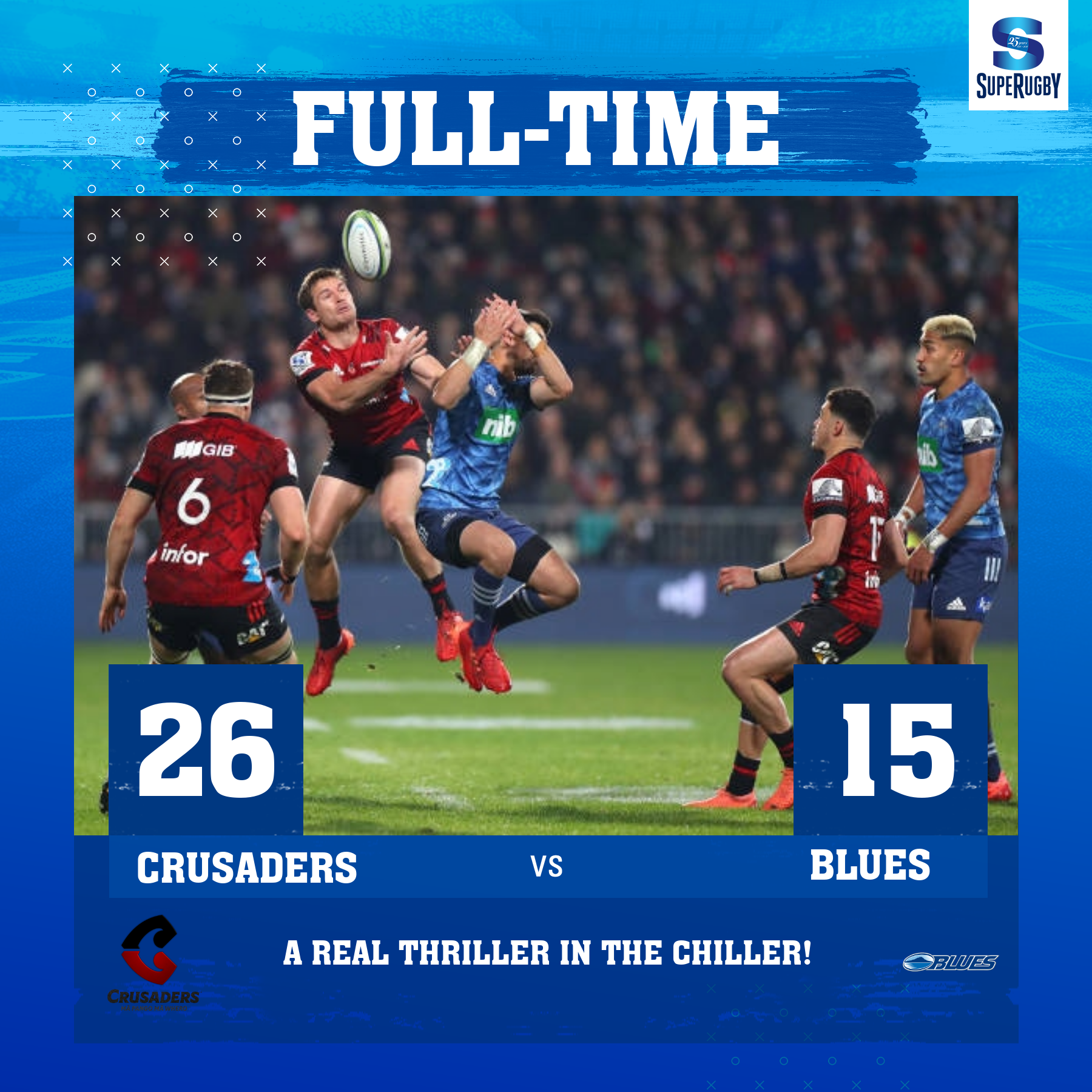