Discipline, Penalties and Buckling Under Pressure

The Sunwolves have been the most disciplined team in the competition this season, conceding just 8.5 penalties per game so far, but that restraint hasn’t been quite as impressive when they’ve been under pressure. While they’re not the worst offenders in their own danger area, nearly one quarter of their total penalties conceded this campaign have come within their own 22m zone.

The Australian squads have been more likely to concede penalties within their own 22m zone than any other squads in the competition this season. The Brumbies have conceded nearly four penalties per game on their own line, more than twice as many as the competition-leading Hurricanes and Bulls in this regard.

This ill-discipline has cost the Brumbies more points than any other squad. The ACT club have conceded 23 penalty goals this season, more than any other team in the competition. 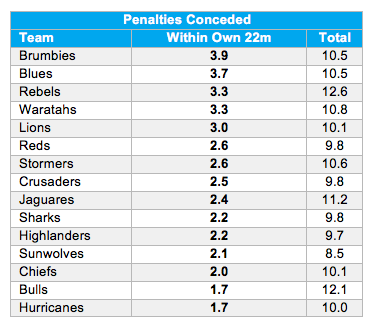 The remainder of the Australian contingent aren’t far behind the team from their nation’s capital, with the Rebels and Waratahs (3.3 each) having conceded the equal third most penalties per game within their own 22m zone of any teams this campaign.

The Australian squads at least have been a little more effective at not squandering their chances on the opposition line. In particular, the Queensland Reds have made the most of their good ball.

The Reds are the only team in the competition to have conceded fewer than one penalty per game within the opposition 22m zone, while fellow Australian club the Rebels rank third-best in this category.

The Lions have conceded nearly a fifth of all their penalties within their opposition’s danger zone, letting them off the hook far too often. Likewise, the Waratahs, Chiefs, and Hurricanes have all let quality scoring chances slip due to poor discipline far too often in comparison to the remainder of the competition. 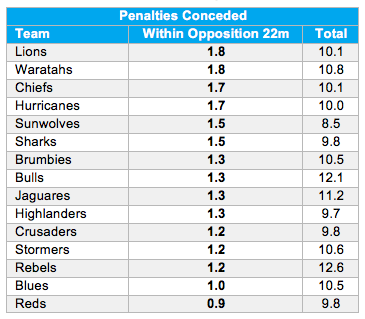 While teams will obviously hope to clean up their game across the park, the critical 22m zones should be of the utmost priority for those teams in the race for a post-season berth.