The Lions secured top spot in Africa Two on Saturday after they outclassed the Sharks 37-10 in a one-sided spectacle at Ellis Park in Johannesburg.

Leading 27-0 at the break thanks to Ruan Combrinck, Rohan Janse van Rensburg, Malcolm Marx and Ruan Ackermann's tries, the Lions were flying.

It looked like they would continue their dominance after the interval when Jaco Kriel went over but the Sharks bounced back well late on, as crossings from Lwazi Mvovo and Chiliboy Ralepelle gave some respectability to the scoreline in an otherwise forgetful day for the visitors.

The visitors were dealt a pre-game blow when inside centre Andre Esterhuizen was ruled out with a hamstring injury sustained in training, before they suffered another setback with just six minutes on the match clock as Paul Jordaan hobbled from the action with a knee injury.

That left them with little time to regroup and the Lions offered no sympathy as they opened the account via a penalty from Elton Jantjies.

On 15 minutes the Lions broke the try-scoring deadlock when a slick passage resulted in South Africa wing Combrinck strolling over on the right.

Jantjies was this time off-target, but it was still a healthy 8-0 lead that was fully deserved for the Super Rugby title hopefuls.

That was a catalyst for the Lions to kick on and they did just that on the half-hour mark when sustained pressure led to centre Janse van Rensburg crossing from close-range before Marx was sent over by Ackermann after Sharks wing Lwazi Mvovo lost a bouncing ball in back-play.

At 20-0 one feared for the Sharks, not just in this game but also their hopes of making the play-offs.

But the Lions weren't done, adding their fourth try thanks to Ackermann's strong carry under the posts. Jantjies converted for a comfortable 27-0 advantage at the interval.

That lead grew to 30 points soon after the break when Jantjies slotted a penalty but one always felt that another try would be required to make doubly sure the Sharks could not deny them a try bonus point. Judging from the opening 50 minutes there was a feeling it was to come.

Not only were the Lions dominant in the backline, their scrum and lineout drive were vastly superior to the Sharks. The latter led to that fifth try as the ball was moved from the back of a maul to the opposite sideline where Kriel crashed over to make it 37-0 with the extras.

Changes were then made by the Lions as their front-row and also Jantjies were replaced and the Sharks soon capitalised, with Mvovo crossing on the left on 63 minutes to ensure they wouldn't go home to Durban with a zero by their name. Another try and the Lions would be sweating.

With ten minutes remaining that was the case when replacement hooker Chiliboy Ralepelle crossed from a driving maul, making it five tries to two.

But the Lions did well to keep their maximum intact and in fact finished the stronger in another impressive performance from Johan Ackermann's side. 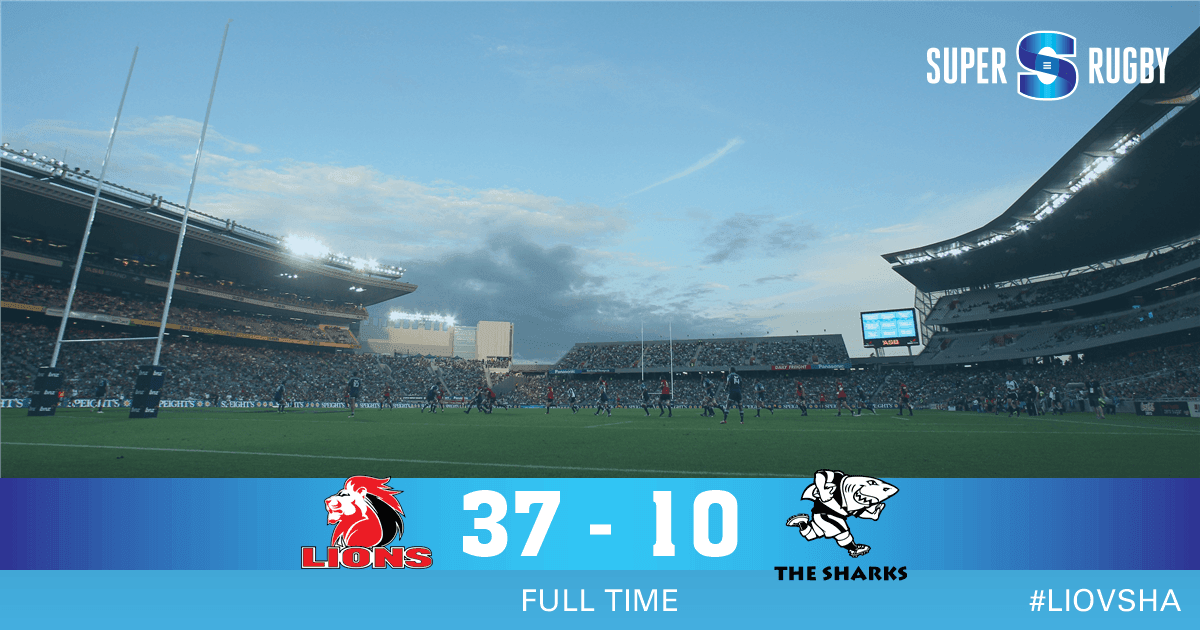