The Brumbies scored seven tries to convincingly beat the struggling Waratahs 47-14 at GIO Stadium in Canberra on Sunday in Super Rugby.

The result moves them a mammoth 10 points clear at the summit of the Australian Conference.

Rob Simmons and Mark Nawaqanitawase went over for Waratahs tries, converted by Will Harrison, as they suffer a fifth defeat this campaign.

It was a thrilling first period that provided five tries, with the Brumbies going in 21-14 in front as the two sides entertained the crowd.

An excellent start to the match saw the hosts impress with ball in hand, but the Waratahs defence stood up well on a perfect day for rugby.

In fact, it was the Sydneysiders who struck first on 12 minutes when Simmonds, on his 150th Super Rugby appearance, reached out to dot down.

The Brumbies did hit back soon after when a kick to the corner resulted in a line-out drive before Kata went over from close range for 7-7.

The end-to-end nature of the game was a sign of things to come as more tries followed, this time a lovely interchange between hooker Damien Fitzpatrick and Nawaqanitawase down the left wing resulting in the young wing slamming the ball down on 22 minutes. Will Harrison converted.

However, a great hit-back for the Brumbies followed when Banks burst over halfway before finding Kata who finished nicely to make it 14-14.

There was a brief respite in the tries thereafter until six minutes from the break, when Neville forced his way over and Lolesio converted, giving the Canberra team a seven-point advantage going into the dressing rooms and ending a half that was an excellent watch for the fans.

The first score of the second period was always going to be key and it went the way of the hosts on 44 minutes, Powell finishing off a nice set move that saw Andrew Muirhead join the line at pace. Compounding that try for the ‘Tahs was Kurtley Beale suffering a hamstring injury.

That double blow appeared to take the wind out of the Waratahs and the scoreline would swiftly get away from them before the hour mark when flanker Jack Dempsey was yellow carded for taking a line-out jumper out in the air. Seconds later Powell found an unmarked Wright for 33-14.

Despite going down to 14 men themselves when Darcy Swain was sin-binned after repeated team infringements, the Brumbies would not let up and with the Waratahs chancing their arm just outside their own 22, an intercept from Wright saw him grab a double which made it a 26-point gap.

And with time up on the clock the hosts made it try number seven as a free-flowing move saw Banks add the gloss on a fine home performance. 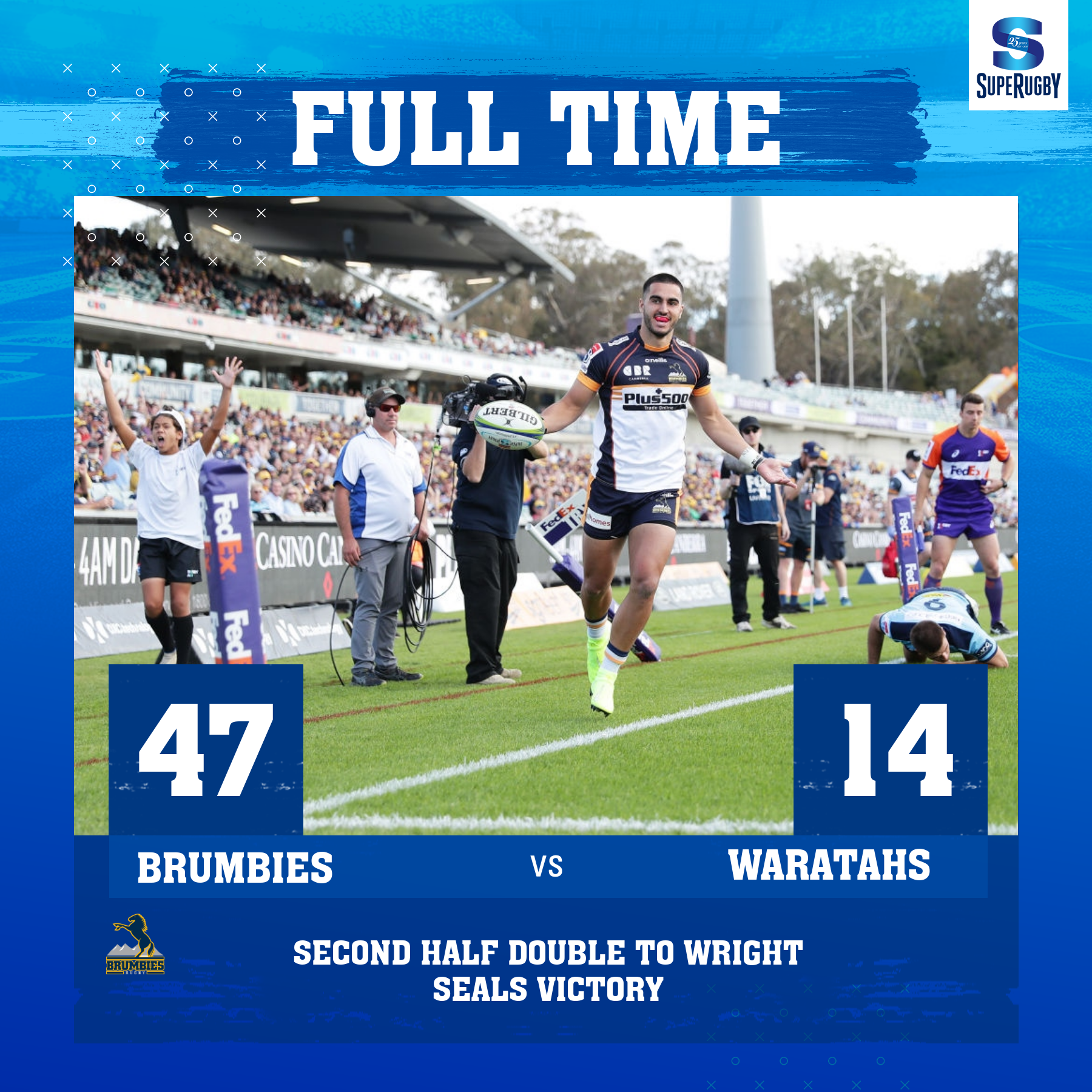