Elton Set To Go Top of the Pops

Super Rugby is blessed with some point-scoring machines in the current crops, and while none are quite within range of the Hurricanes’ Beauden Barrett among active players, the Lions’ Elton Jantjies is set to come upon a still-rare milestone this weekend.

The Lions’ playmaker has scored 996 points across his Super Rugby career to date, sitting just four points shy of becoming the fifth player in the history of the competition to score 1,000 points.

In fact, three of the top seven most prolific point scorers in Super Rugby history are currently active in the competition, with NSW Waratahs’ flyhalf Bernard Foley (976) also within reach of the four-figure milestone - though, he’ll have to wait until at least Round 4 with the NSW Waratahs enjoying the week off in Round 3.

Elton Jantjies picked up a tally of 173 points in the 2018 campaign - the fourth most of any player - and already has 17 points to his name thus far in the 2019 edition. 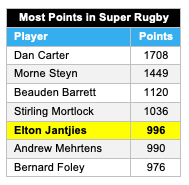 The Lions face off in a South African derby against the Bulls this weekend, and that spells good news for Jantjies fans with the flyhalf having scored an average of 13 points per game in his last five Super Rugby meetings with the Pretorian club.

If history is anything to go by, Jantjies should reach the 1,000-point milestone this weekend. Historically, he has scored an average of eight points per game against the Bulls - certainly not his best figure against any team, but enough to see him tip over the milestone mark. 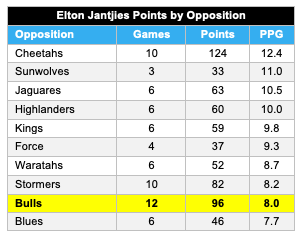 Fellow South African squad the Cheetahs felt Elton Jantjies’ wrath more than any other club in Super Rugby, with the Springbok flyhalf scoring more than 12 points per game against them. Competition newcomers the Sunwolves and Jaguares have also struggled to contain him, while it’s the unassuming Queensland Reds (5.4) against whom Elton Jantjies averages his fewest points per game of any Super Rugby team.