Hooker Folau Fainga'a scored a magnificent hattrick to help the Brumbies to a hard-fought 26-21 Super Rugby win over the Blues in Canberra.

The Blues got off to a fantastic start, racing to a 12-0 lead inside the first 10 minutes thanks to TJ Faiane and Caleb Clarke.

Faiane benefitted from an overly-stretched defence when, after eight phases of build-up play, Melani Nanai drew in the last man and offloaded to Faiane, who sprinted the remaining 30 meters to open the scoring seven minutes in.

Lacking any penetration with their backline, the Brumbies went to the boot and started leaning on their pack, which has been such a force for them all season.

Following a late, high challenge that earned Alex Hodgman a trip to the naughty corner for 10 minutes in the 18th minute, the Brumbies kicked for the corner and set up a devastating driving maul to get Fainga'a his first try of the game.

Otere Black was having a dreadful time with the boot early on and only had one conversion to his name after two attempts and two failed penalty shots. An issue that would ultimately come back to cost the Blues dearly.

Discipline was also becoming a huge problem for the visitors as they repeatedly let the Brumbies off the hook by giving away penalties at the breakdown.

After the Blues conceded five straight penalties, including two at the scrum, the visitors resilience crumbled and a wayward pass out wide was gobbled up by James Slipper and he dived over from close range to score the Brumbies second try.

The New Zealanders were also handed a warning for repeated infringements. After half time this became hugely important because Ofa Tu'ungafasi was sent to the sin bin for a fairly innocuous infrigement at a maul.

This was followed by yet another scrum penalty, which could probably have resulted in another yellow card if the referee had fully committed to his threats, but they were let off this time.

They did however concede another try.

The Brumbies predictably kicked for the corner to set up another maul. This time the Blues had no answer and Fainga'a was over for his second of the match.

To their credit, the Blues dominated possession and ran down the clock well when they were short on players - even managing to add six more points via the boot of Black.

However, they were undone by yet another maul late with Fainga'a again profitting to complete his hattrick.

The Blues pushed hard for a way back into the game, but the Brumbies held on valiantly to ensure that no New Zealand side would claim victory in round 12 of Super Rugby this season. 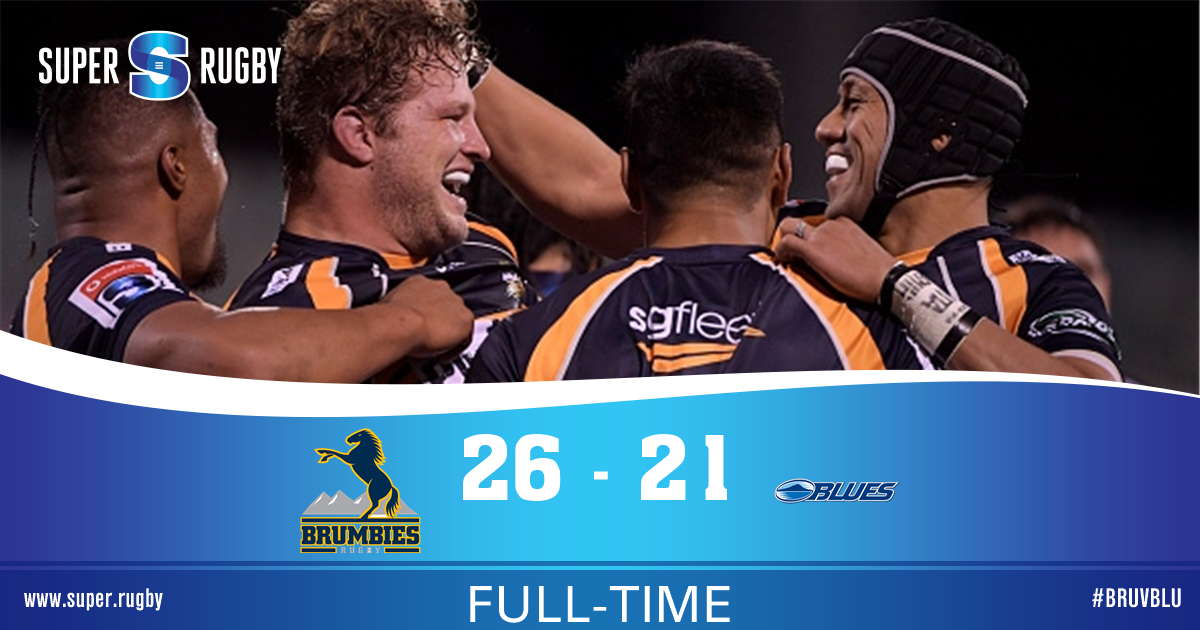