The Western Force will play the Brumbies in the Super Rugby AU semi-final after securing a superb 30-27 comeback victory over the table-topping Reds in Perth.

Trailing by as many as 14 points in the first half, the Force mounted a stunning fightback before holding on to snatch a late victory over their much-vaunted rivals, with impressive winger Jordan Olowofela finishing with a superb hat-trick.

The victory means the Force can not be overtaken in third spot on the table regardless of Sunday's outcome between the Waratahs and the Rebels and will play the Brumbies in the semi-final for a chance to earn a rematch against the Reds in the decider.

The match started in disastrous fashion for the Force when, just one minute into the game, Tevita Kuridrani was sent to the bin for a dangerous tip tackle on Hunter Paisami - although the Force were probably lucky that he avoided a straight red.

Moments later, the Reds found themselves on the attack in the Force 22, leading to a thrilling solo try for Paisami after he latched onto a short pass in the midfield and barreled straight through Domingo Miotti's attempted tackle before stretching over the line and dotting down.

But the Force hit back almost straight away when Jordan Olowofela intercepted Tate McDermott's deflected pass and ran all the way from his inside his own half for the try as Bryce Hagerty tried in vain to catch him.

The tries were coming thick and fast and it didn't take the Reds long to hit back via a stunning solo effort from none other than prop Taniela Tupou. With nothing much on, the big man collected a short pass in the midfield and broke straight through the line, bouncing off several tackles before getting back up and running all the way for the score.

The Force defence was struggling to contain the Reds and giving away a lot of penalties, and after one too many warnings from referee Damon Murphy, Toni Pulu was sent to the bin for another infringement at the breakdown.

The Reds opted for a scrum from the ensuing penalty, and it was a simple pop pass inside from McDermott to Jordan Petaia that allowed the dangerous winger to cross for their third try of the evening.

The Reds were soon back on the attack but this time an absolutely crunching tackle from Kuridrani on Paisami saw the ball turned over - with Paisami forced to leave the field after copping the almighty hit.

Trailing by 14 points, the Force decided to take the points on offer when they earned a penalty in Reds territory, but when they found themselves back in the opposition 22 moments later they opted for the lineout instead, a decision that paid off in spades when Feleti Kaitu'u picked up the ball from the back of the ruck and bashed his way over the line for their second try. Miotti missed the conversion as it finished 21-15 to the Reds at half-time. 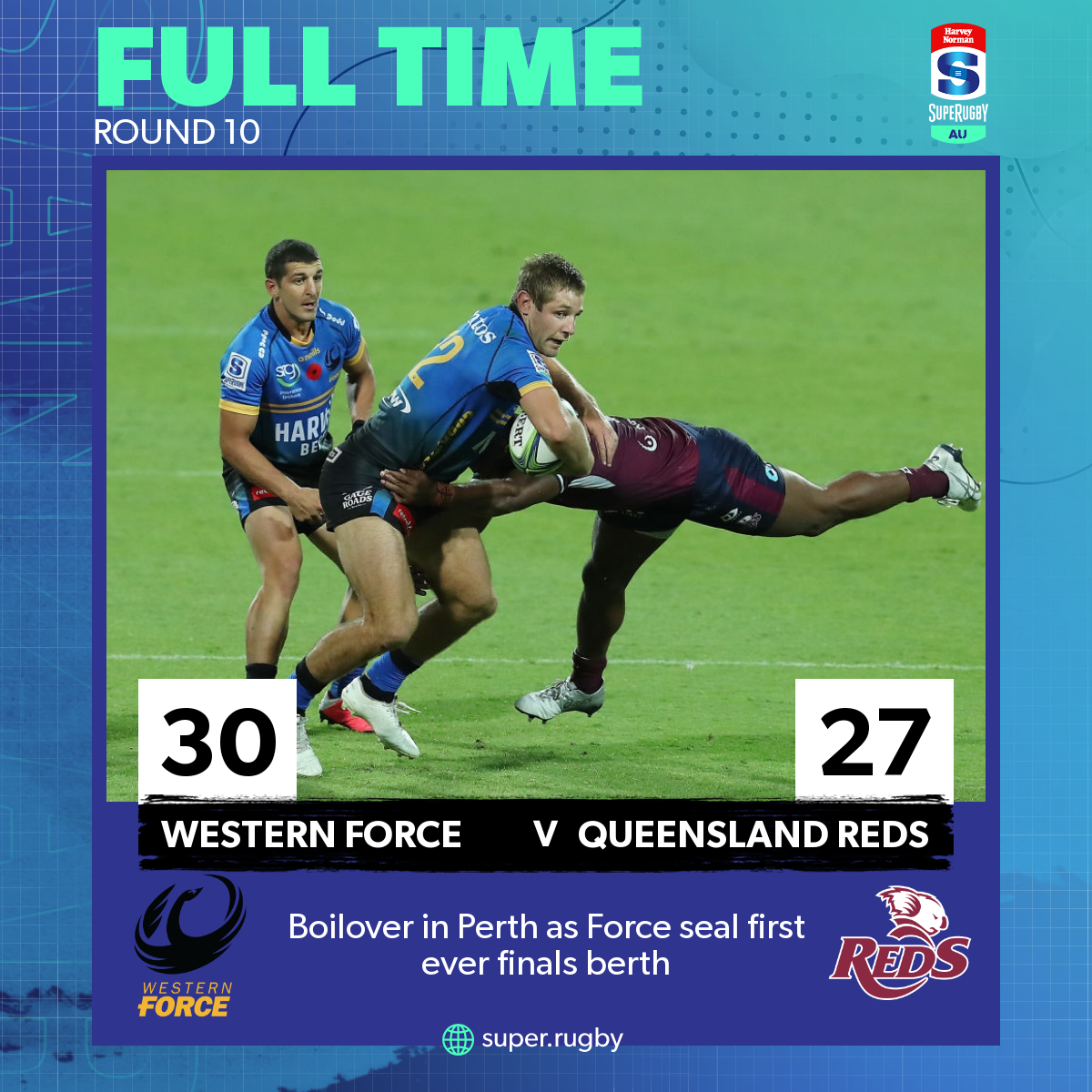 And the Force made the most of their one-man advantage as a great line break from Pulu and assist from Miotti took them all the way to the Reds try-line before Olowofela dotted down for his double out wide. Miotto couldn't slot the conversion as the Reds held on to a narrow one-point lead.

Having given up 13 unanswered points, the Reds were happy to go for goal when they earned a penalty just inside the Force territory, with O'Connor nailing the impressive long-range kick, but the Force returned the favour shortly after to close the gap once again.

With 15 minutes to go, the Reds earned several penalties inside the Force 22, and after one infringement too many, the referee lost his patience and sent Jeremy Thrush to the bin. The Reds kicked for goal, with O'Connor making no mistake to put them four points clear.

With time running out, the Force delivered a potential killing blow when Richard Kahui put a little kick through the defence and Olowofela regathered the ball before cruising over the line for his hat-trick. Miotti added the extras to put the Force three points clear.

Shortly after, an attempted clearance from the Force inside their 22 was charged down, leading to a Reds penalty. But the visitors didn't take the points on offer to square it up and opted for the scrum instead, a decision that turned out to be a mistake when the Force defence managed to hold up an attempted maul and force the turnover to hang on for a famous victory.