The Hurricanes have undoubtedly been the team to beat this season and Chris Boyd’s side has shown it is as comfortable playing away from home as they are in Wellington, if not more so.

This year, the 'Canes have lost just once overall and won all six games on the road, plus one 'home' win in Palmerston North - no other team has managed more than four victories on their travels.

However, does a strong away record necessarily set a team up for a potential triumph in the Final? We look at the away records of teams in the past and investigate whether their fine form on the road lead to a successful season overall.

With teams playing differing amounts of away games each season, the fairest way to determine the best away side in each campaign is through win percentage. Taking this into account, it is perhaps surprising to see that only eight of the 19 eventual Super Rugby winners have been able to boast the best away record in the regular season. 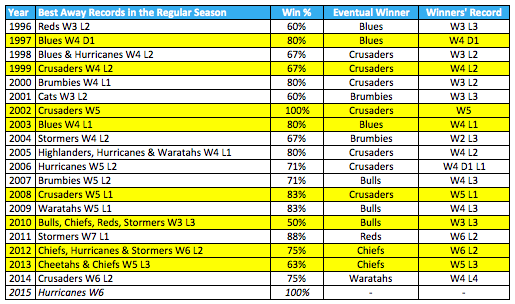 This particular news may not be music to the ears of Hurricanes fans with their side currently six from six.

However if a good omen was needed, it is in the form of the Crusaders who boast the only 100 per cent away record in Super Rugby when they won all five in 2002 before going onto win the trophy.

There does seem to be a theme when it comes to the teams and their away records throughout successful seasons. The New Zealand sides generally are more likely to boast the best away record throughout the Regular Season before going on to win the Final. Of the eight occasions that the overall winner has won the most away games, seven were recorded by Kiwi sides.

The Chiefs had the joint-best record away from Hamilton in their two title winning seasons, while the Blues ruled on the road in two of their three wins. The Crusaders too have won three of their seven titles after recording the best away win percentage. They have even managed to win two Finals on away soil - a feat only they and the Bulls have achieved - after seasons where they weren’t the top team on the road.

In a stark contrast to the New Zealand teams, Australian Super Rugby winners have fared better overall when they have not performed as well as other teams away from home.

The Waratahs last year won just four of eight of their games outside of Sydney before winning the Final, while in 2011 the Reds were bettered by the Stormers who won seven of eight on the road. Similarly the Brumbies’ two Super Rugby wins have come despite not travelling as well as other teams.

In addition to this, boasting the best away win percentage throughout the regular season seems to be a kiss of death for the Australian sides, with the Reds (3), Brumbies (2) and the Waratahs (2) all ending a Regular Season with the best away record before failing to win the competition.

It is a similar story in South Africa, where the Bulls are the only team to win the Super Rugby title, which they’ve achieved just once after recording the highest win percentage away from Pretoria, which sat at just 50%.

It could be argued that the South African franchises have the toughest away trips with the distance they have to travel, however they have still managed to record some of the best away records since Super Rugby began.

It is evident that fantastic away form doesn’t mean too much in the grand scheme of Super Rugby, provided you win the majority of your home games, but the Hurricanes will be boosted by the ability of New Zealand teams to go on and win the Final after a strong campaign away from home and they will be hoping to replicate their Kiwi rivals, the Crusaders, by winning every away game in a successful Super Rugby season.