The New South Wales Waratahs are back in the winner’s circle as the competition heads into Round 15 after a big win over the Highlanders on home turf last weekend. Unsurprisingly, their resurgence in form has come on the back of star player Israel Folau’s try-scoring antics which now truly see him among the elite in the history of the competition.

Folau scored two tries in the Waratahs’ 41-12 win over the Highlanders, marking the 10th time in his Super Rugby career that he’s scored multiple tries in a game. Those two five-pointers saw him take his career tally to 50, becoming just the eighth player in Super Rugby history to score a half century of tries.

It’s been one of Folau’s best seasons on the park in 2018, despite playing in just eight of a potential 11 games thus far. He’s crossed for five tries from those eight games already, and could challenge for his most tries in a single season - a personal best that he set back in 2014 when he scored 12 tries in 14 matches for the Waratahs.

The dual international has scored against every club that he has faced in his Super Rugby career, and has crossed on multiple occasions against all but four of the teams he has faced.

The Rebels have felt the brunt of Folau’s force more often than any other squad; the New South Wales flyer has bagged six tries against the Melbourne outfit, more than against any other squad in the competition.

He’s also enjoyed his form against the Reds, against whom he has scored five tries. Folau’s most tries against a New Zealand outfit are shared among the Blues, Chiefs, and Highlanders, who have all conceded four tries to the Waratahs’ magician. 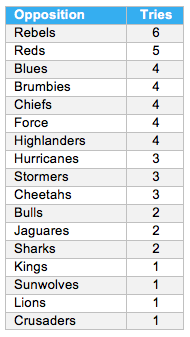 The South African contingent have been a little tougher for Folau to crack. He’s scored more than two tries against just one of the South African clubs still playing in Super Rugby, while he’s crossed just once each against both the Kings and Lions.

Folau’s strong form comes at a great time for the Wallabies as well, who will soon hosting a three-game tour against Ireland. He’s already bagged 32 tries in 62 Tests for the Wallabies thus far, and now Folau will be looking to move further up the top try scorers list for his country.

Indeed, Folau is already the fifth most prolific try scorer in Wallabies history, but he sits a fair way behind David Campese, who retired with a personal tally of 64 five-pointers.