The Brumbies' impressive unbeaten record against fellow Australian teams continued as they snatched a dramatic 24-23 victory over the Waratahs in Sydney.

Dan McKellar’s men have not lost to another team from Australia since March 2019, but they came mightily close to seeing that run end on Saturday. The men from the capital were indebted to replacement scrumhalf Issak Fines, whose converted try three minutes from time proved decisive.

They were poor in the opening half-hour, despite Tom Cusack’s early try, as the Tahs dominated. Tom Horton and John Ramm both went over, while Will Harrison added 10 points from the tee, as the hosts went 20-5 ahead.

Although the visitors hit back via Folau Fainga’a and Rob Valetini, they appeared destined to taste defeat following another Harrison three-pointer, but Fines came to the rescue.

Despite victory in their opener, there were a couple of teething issues for the Brumbies which weren’t rectified in the initial exchanges on Saturday.

Their scrum, usually so effective, was demolished by a youthful Tahs front-row and that allowed the hosts to control the forward exchanges.

They also struggled with their discipline and, although the visitors went ahead thanks to Cusack’s try, the Canberra outfit began to infringe with regularity. Successive penalties enabled Harrison to kick the hosts ahead before Andy Muirhead was yellow carded for a cynical breakdown transgression.

McKellar’s men almost lost another to the bin, only for a stern talk from referee Angus Gardner to seemingly do the trick, but by then they were on the back foot. Hooker Horton touched down after the Waratahs had set up camp in the opposition 22 and that was soon followed by another well-worked score.

The Brumbies were caught unawares by some quick thinking from the hosts’ fly-half as he spotted Ramm in space out wide and the wing duly did the rest.

At 20-5 in front, the men from Sydney were dominant, but there is a reason why last season’s Super Rugby semi-finalists were five from six before the competition was curtailed earlier this year.

They refocused and went back to what often serves them well, which is their trusty maul. Arch-poacher Fainga’a was the beneficiary as he touched down to leave them 10 points adrift with seven minutes of the half remaining.

The Brumbies now had the momentum and they reduced the arrears further just shy of the interval when Valetini powered across the whitewash.

The half-time hooter came at the wrong time for the hosts, who fell back into the malaise which encapsulated their display in the early exchanges. They were fortunate not to concede a try as the Waratahs pressed and instead escaped by conceding just a Harrison three-pointer.

McKellar’s charges were unable to benefit from that let-off and continued to make errors. In contrast, the hosts were improved from their performance against the Western Force, where they edged past the Perth outfit 23-14.

When the fly-half lined up another penalty attempt, they should have been out of sight, but the pivot’s miss left the door ajar for the Brumbies and they duly took advantage.

Once again, the forwards did the hard yards before Fines found the slightest of gaps to slither through and score under the posts for Bayley Kuenzle to convert and get his side out of jail. 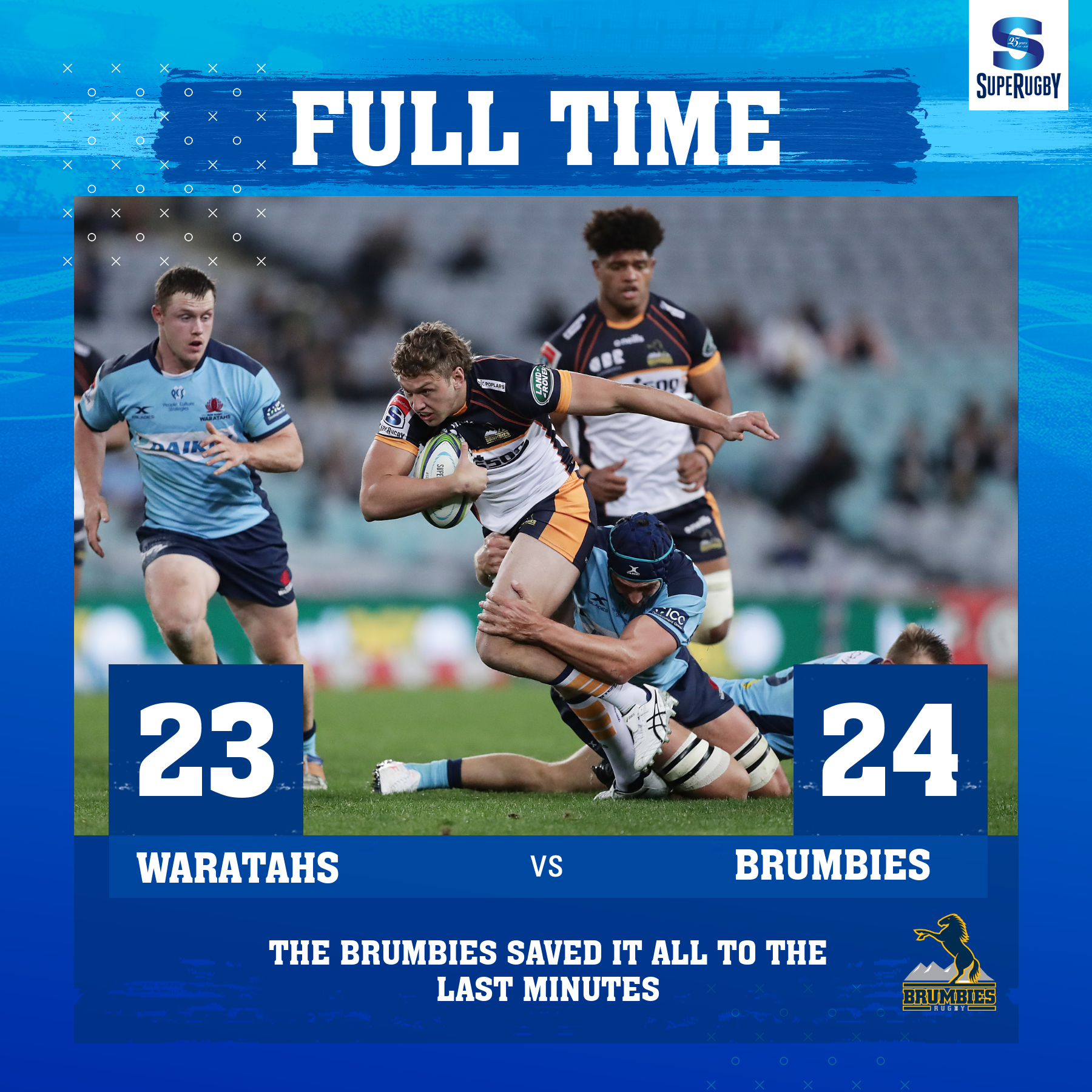