There’s no denying that being able to get on the front foot in Super Rugby is a massive advantage and catch-up rugby is something no team wants to be getting too familiar with, but which teams are the most effective at launching themselves off the starting blocks?

It should come as little surprise that the attacking flair of the New Zealand-based outfits sees them as some of the most likely teams to score the first try of the game as any other.

In a breakdown of each team’s games since the beginning of the 2015 season, there are some interesting figures standing out.

Perhaps the most striking is that the Southern Kings have scored the first try of the game in 73.7% of their fixtures in that period. The quick-fire starts haven’t been enough to net them much success, though, with only the Sunwolves (0%) enduring a lower win rate in games where they’ve scored the opening try. 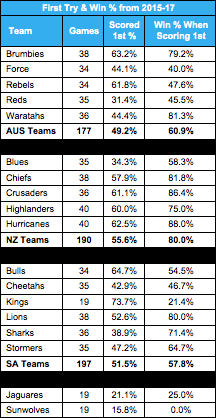 Of the ANZ teams the Brumbies boast the best strike-rate when it comes to scoring the first try; they’ve done so in 63.2% of their last 38 games. Moreover, they’ve managed to back it up by winning 79.2% of those games in which they’ve bagged the opening five-pointer.

If there’s one team in the competition you don’t want to concede the opening try of the game to, it’s the Hurricanes. The reigning champions are relentless when drawing first blood, winning a staggering 88% of their games in which they’ve scored the first try since the beginning of the 2015 season.

The New Zealand clubs lead the way after striking first, going on to win in four of every five instances. While Australia are the only one of the three main regions to concede the opening try more often than they score it, once they have found the opener they go on to win on nearly 61% of occasions.

The Jaguares and Sunwolves have just one win from seven games in which they’ve scored the opening try between them, though the Jaguares successes so far in 2017 indicate that perhaps they prefer to chase.