The Jaguares claimed their first win of the Super Rugby season as they beat the Waratahs 38-28 at Estadio José Amalfitani on Saturday.

For the Sydney outfit this is their first defeat of 2018 which means they remain third in their Conference, behind the Rebels and Reds.

Jaguares were rampant right from the outset in Buenos Aires and scored from the Waratahs' kick-off as they broke downfield and Emiliano Boffelli finished off in the corner. Nicolas Sanchez added the conversion from the touchline but there was much more to come from them.

10 minutes later they came left to that man Boffelli, who stepped inside Waratahs tighthead Paddy Ryan for a crossing that made it 14-0.

Their third try arrived on 17 minutes and this time it was full-back Joaquin Tuculet going over after hitting a lovely line on halfway, with Sanchez then also adding his name on the try board as he slipped over near the right sideline three minutes later. It was now 26-0.

The Waratahs were on the ropes but things did improve five minutes before half-time when, after a few phases, number eight Jed Holloway picked from a ruck 22 metres out and raced under the posts for a converted try. The 'Tahs were hoping this was the start of a comeback.

It wasn't as Foley then threw a loose pass on halfway that was gobbled up by Bautista Delguy, who cruised over for a 33-7 interval lead.

Crucially the Waratahs struck first in the second period as nice offloading led to Jake Gordon finding Curtis Rona who cut the gap to 19.

Following a long spell of pressure approaching the hour, Sanchez looked to add a penalty but the wind denied the Jaguares further points.

The Waratahs though were now up against the clock and needed three converted tries to win the game, as it went into its final 15 minutes.

Jaguares replacement Sebastian Cancelliere came agonisingly close to extending the buffer but had the ball dislodged before the try-line, but it didn't take long for the score to come as Matias Orlando crossed on 73 minutes for their sixth try.

Incredibly though that wasn't enough to secure the try bonus-point as first Nick Palmer and then Israel Folau crossed in the 79th and 80th minute to see the maximum chalked off, taking the gloss off the Jaguares' opening victory somewhat. 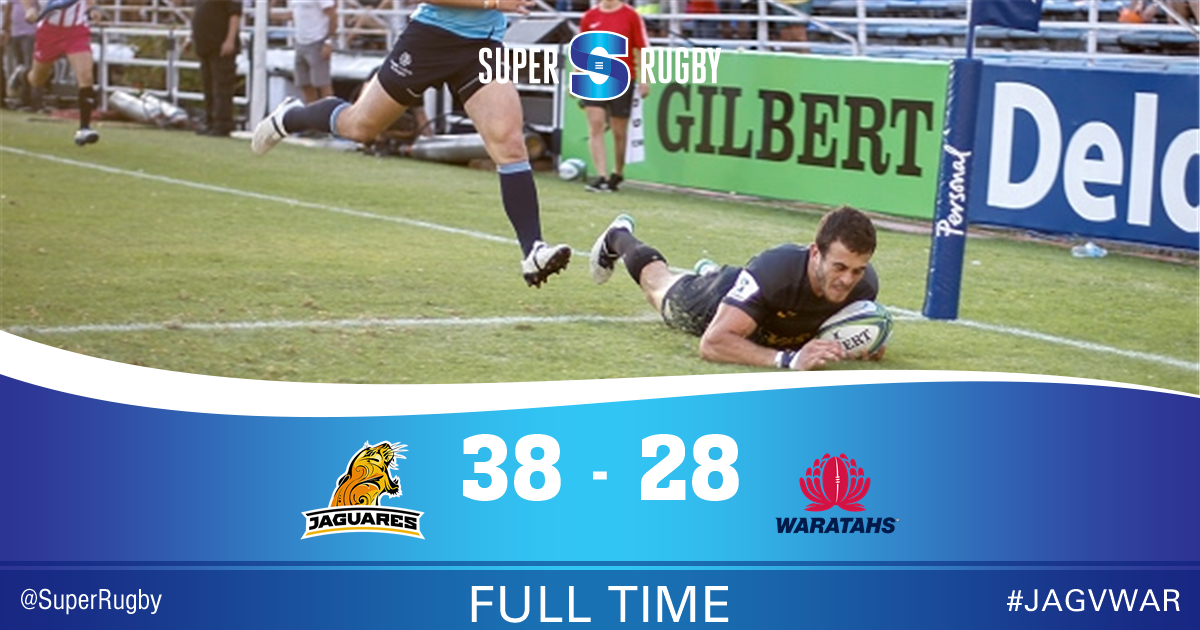