The Blues made a winning return to Super Rugby action when they claimed a 39-16 win over the Reds in their trans-Tasman encounter in Auckland on Friday.

The home side were full value for their win as they outscored the Reds by five tries to two although this match will not be remembered as a classic as the teams committed a plethora of unforced errors and both sides had two players sent to the sin bin.

The result was a fitting reward for long-serving Blues flanker Jerome Kaino, who made his final appearance for the Blues at Eden Park before his move to Toulouse at the end of the Super Rugby season.

The early stages of this game was a messy affair with both sides guilty of several unforced errors and conceding numerous turnovers.

The Reds opened the scoring courtesy of a penalty from Jono Lance in the second minute before Stephen Perofeta drew the homeside level with a three-pointer off the kicking tee of his own after 12 minutes.

The scrappy nature of this game continued and the Reds regained the lead when Lance slotted his second penalty in the 15th minute but the Blues replied in style five minutes later when Melani Nanai gathered a long pass from Rieko Ioane before crossing for the opening try.

Perofeta failed with the conversion attempt and although the Blues held a narrow 8-6 lead, the game's complexion changed when the Reds received two yellow cards in quick succession.

Jordan Petaia was the first player to receive his marching orders for a tip-tackle on Michael Collins in the 23rd minute and two minutes later Taniela Tupou joined him in the sin bin for a no-arms tackle on Matt Duffie.

With a two-man advantage, the Blues took control of proceedings and - after another Perofeta penalty - they were rewarded with two tries during Petaia and Tupou's stints on the sidelines.

First, Rieko Ioane gathered a pass from Sam Nock on the Reds' 10-metre line before beating a couple of defenders on his way over the try-line in the 29th minute.

And two minutes later, Matt Moulds slipped through a tackle from George Smith before crashing over for his side's third try which meant the Blues were leading 21-6 at half-time.

The Blues continued to dominate after the break and extended their lead thanks to another Perofeta penalty in the 46th minute.

There was further reward for the home side in the 54th minute when Perofeta barged over from close quarters after Collins and Matiaha Martin were stopped close to the tryline in the build-up.

That gave the hosts a commanding 31-6 lead and with the game in the bag, they took their foot off the pedal but also lost their defensive shape in the process.

In the 62nd minute, Reds replacement back-row Caleb Timu punched through the home side's defence and was eventually brought to ground deep inside his opponents' 22. The ball was recycled quickly and shifted to Duncan Paia’aua, who crossed for his side's opening try.

Martin received a yellow card for a cynical defensive foul in the build-up to that try and five minutes later the Blues also had to play with 13 men when Sione Mafileo was sent to the sin bin for illegal scrummaging.

The Reds soon made their numerical advantage count when Alex Mafi dotted down off the back of a lineout drive deep inside the Blues' half but that would be the last time the men from Brisbane would score points as the home side finished stronger.

In the 77th minute, Bryn Gatland extended the Blues' lead courtesy of a penalty, after another poorly timed tackle from Petaia, and they sealed their win in the game's closing stages when Caleb Clarke glided through a gap before diving over for a deserved try from close range. 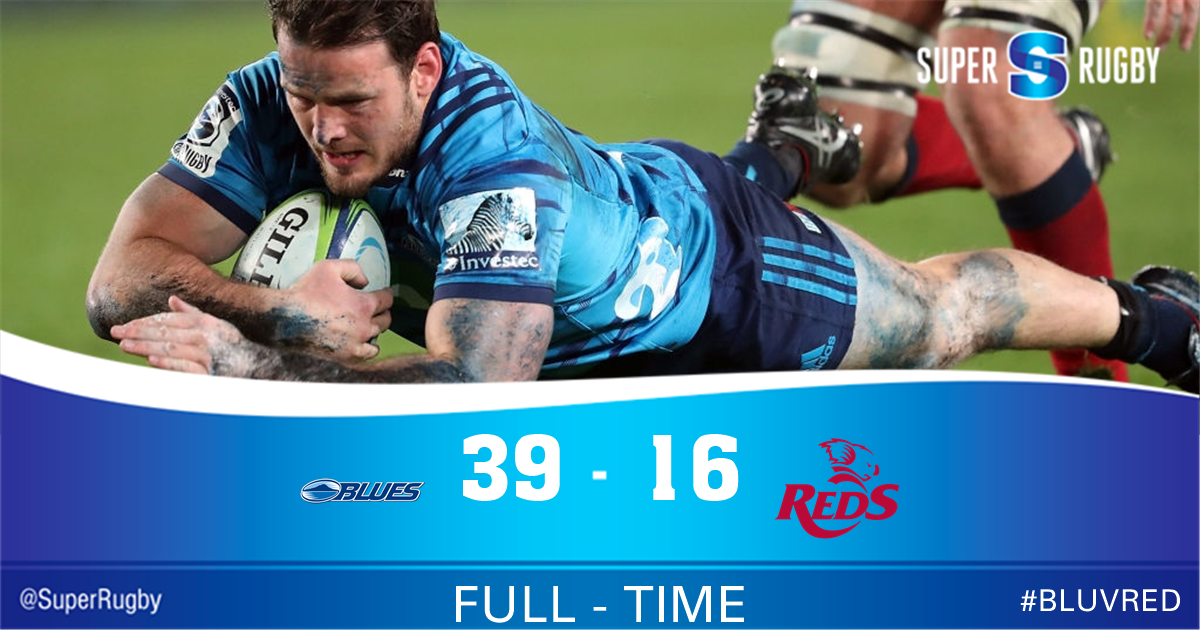