The Brumbies got their 2018 Super Rugby campaign off to a positive start when they secured a 32-25 victory over the Sunwolves in Tokyo.

Although the Australian side secured the result, they were made to work very hard for this result as the Sunwolves were the better side during the opening half and held a slender 19-15 lead at the interval.

The men from Canberra eventually outscored their hosts five tries to three after an impressive fightback in the second half.

The Brumbies made a bright start and after an extended period camped inside the Sunwolves' 22, Christian Lealiifano opened their account courtesy of a penalty in the sixth minute after Lappies Labuschagne was blown up for a ruck infringement.

The Sunwolves' response was immediate and three minutes later they found themselves on the front-foot at an attacking lineout close to the Brumbies' try-line.

They launched a drive from the set-piece and although the Brumbies initially did well to keep them at bay, several of the home side's backs joined in to give the maul some momentum before Hosea Saumaki dived over from close quarters for the opening try.

The Sunwolves held the upper-hand for the next 10 minutes and extended their lead in the 19th minute when Timothy Lafaele crossed for their second try after Willie Britz did well in the build-up with a bullocking run before he was stopped just short of the try-line.

With both tries converted, the Sunwolves were leading 14-3 but the Brumbies responded shortly afterwards when Isi Naisarani crossed the whitewash but his effort was disallowed after television replays showed that Henry Speight knocked the ball on in the build-up.

The visitors put that setback behind them and were rewarded in the 24th minute when Lachlan Mccaffrey cantered over for an easy five-pointer. Sam Carter and Naisarani initially drew in several defenders with strong carries inside the Sunwolves' 22 before Joe Powell got a pass out to the on-rushing Mccaffrey close to the try-line.

But once again, the home side struck back in style and five minutes later, they launched an attack which was rounded off in style by Saumaki in the left-hand corner.

The Brumbies did not take that lying down and in the 35th minute Christian Lealiifano made a superb line break before offloading to Kyle Godwin, who cantered over for an easy try.

Lealiifano added the extras but it was the Sunwolves who had their tails up as the teams changed sides at the interval, although the Brumbies would regain the lead in bizarre fashion two minutes into the second half.

This, after Sunwolves captain Yutaka Nagare passed the ball into his own goalpost. Tevita Kuridrani was quickest to react and pounced on the loose ball before dotting down next to the upright.

The Brumbies were slowly taking control of proceedings and in the 53rd minute, they went on the drive from an attacking lineout inside the Sunwolves' 22 before Josh Mann-Rea dotted down off the back of the maul.

The Sunwolves upped the ante on attack but despite spending large periods camped inside the visitors' half, a 65th minute penalty from Hayden Parker was all they had to show for their efforts.

Five minutes later, the Brumbies launched an attack inside the Sunwolves' 22 and Tom Banks crossed in the left-hand corner to put more daylight between his side and their hosts.

The Sunwolves did not surrender, however, but despite spending most of the closing stages camped inside the Brumbies' 22, a late penalty from Parker was all they had to show for their efforts. 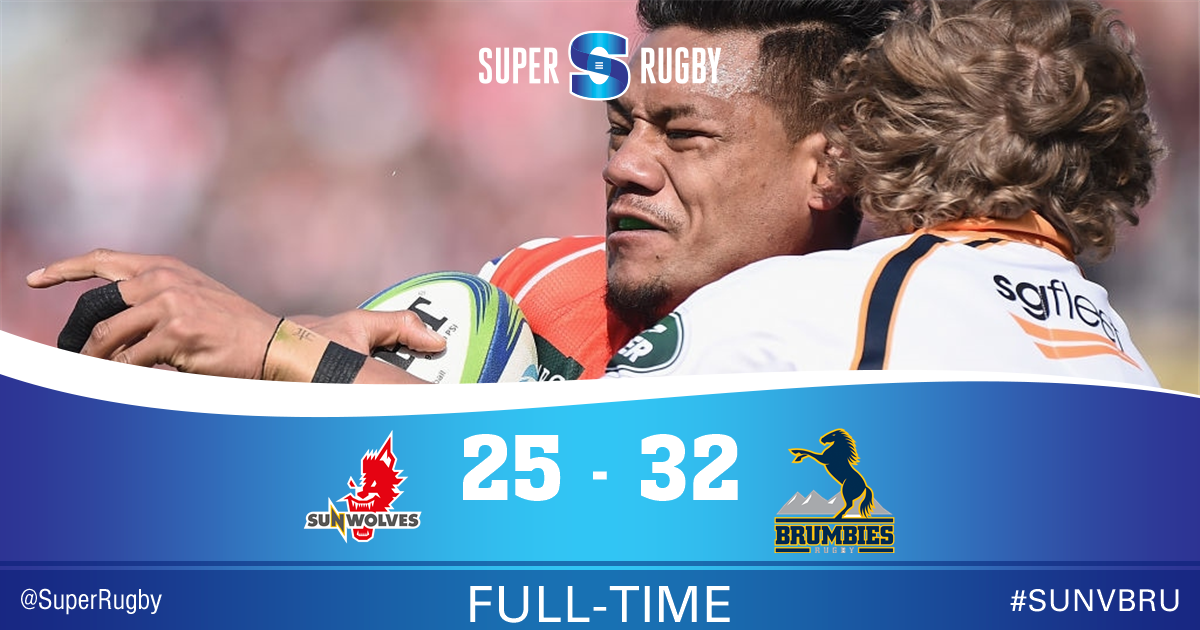