The Highlanders got their Super Rugby campaign back on track when they claimed a hard-fought 39-27 victory over the Lions in Dunedin on Saturday.

As expected, this was an entertaining affair with both sides employing expansive game-plans but the Highlanders got the rub of the green in the end and they eventually outscored the men from Johannesburg five tries to four.

The home side were fastest out of the blocks and opened the scoring after six minutes when he gathered a loose pass from Tom Franklin in the Lions’ 22 before crossing for a deserved try which he also converted.

The Lions narrowed the gap courtesy of a penalty from Elton Jantjies but the Highlanders continued to dominate and extended their lead in the 15th minute when Liam Coltman barged over from close quarters, after Luke Whitelock was stopped close to the try-line in the build-up.

Whitelock eventually got his name onto the scoreheet in the 34th minute after grabbing a brilliant offload from Elliot Dixon and although Sopoaga’s conversion attempt was wide of the mark, the Highlanders held a comfortable 19-3 lead.

The Lions finished the half stronger though and were rewarded when Harold Vorster ran onto an inside pass from Aphiwe Dyantyi before dotting down in the 39th minute.

Jantjies added the extras and on the stroke of half-time the visitors launched a lineout drive deep inside the Highlanders’ 22 before Robbie Coetzee dotted down off the back of the maul.

This meant the match was evenly poised as the teams changed sides at half-time with the Highlanders leading 19-15.

The home side made a superb start to the second half when they launched a counter-attack from inside their half, shortly after the restart, and Ben Smith did well to draw in the last defender before offloading to Waisake Naholo, who crossed for an easy-five-pointer.

The Lions fought back bravely and narrowed the gap in the 49th minute when Coetzee went over for his second try after the visitors got another lineout drive going close to the Highlanders’ try-line.

The Highlanders regained the initiative in the 64th minute when Rob Thompson gathered his own grubber kick in the Lions’ 22 before getting a pass out to Teihorangi Walden, who crossed for the hosts’ fifth try.

Sopoaga converted which meant the Highlanders held a 33-20 lead but the Lions did not surrender and kept their hopes alive when Marnus Schoeman ran onto a pass from Dillon Smit before burrowing his way over the try-line.

The Highlanders finished stronger, however, and two penalties from Sopoaga in the game’s closing stages sealed their eleventh consecutive home victory. 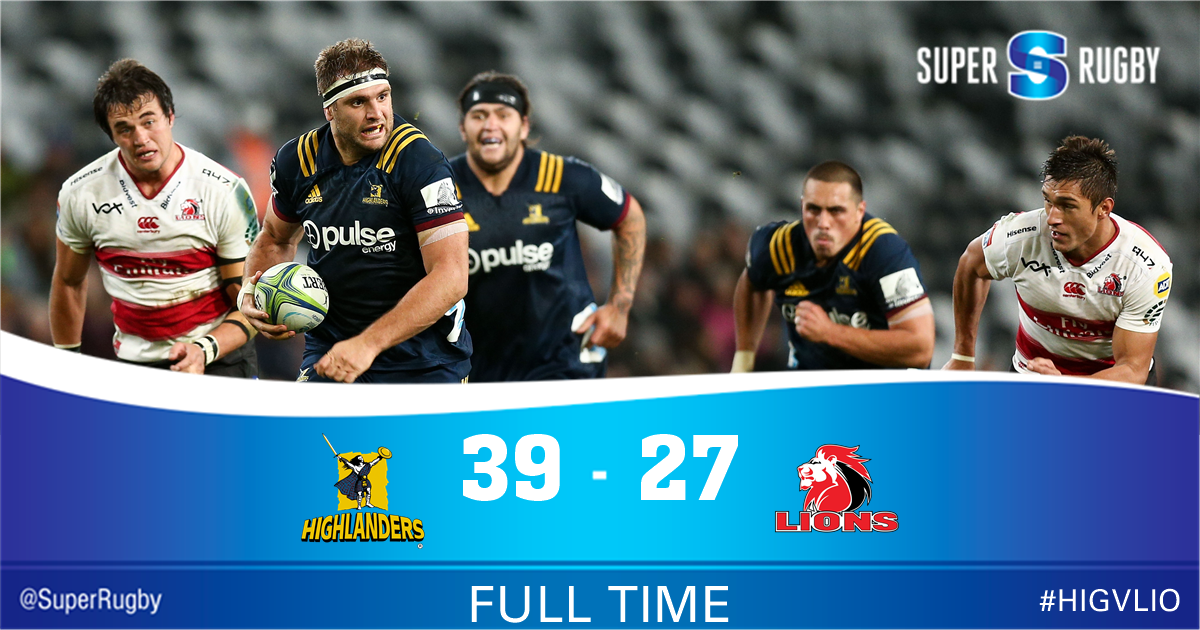