Force go down fighting against the mighty Brumbies

The Western Force gave a good account of themselves but ultimately went down 31-14 to the Brumbies in Friday's Super Rugby AU clash in Canberra.

Although the hosts were made to work hard for the win, they were deserved winners in the end, outscoring the visitors five tries to two.

Tom Wright, Tom Banks, Will Miller, Len Ikitau and Andy Muirhead all crossed the whitewash for the Brumbies, while Bayley Kuenzle succeeded with three conversions.

For the Force, tries came via Fergus Lee-Warner and Jono Lance, both of which were converted by Ian Prior.

The opening exchanges were evenly contested but it was the Force who drew first blood in the ninth minute when Lee-Warner scored after bursting through a tackle from Allan Alaalatoa close to the try-line.

The next 15 minutes were evenly contested with both sides spending time in their opponents’ half, although the Force had the bulk of the possession during that period.

The Brumbies were gradually gaining the upper hand, but they suffered a double blow when they had two tries disallowed during the second quarter. First, Alaalatoa's effort was disallowed after the TMO ruled he had knocked on while crossing the whitewash. Shortly afterwards, Muirhead went over in the right-hand corner but his try was also ruled out after Miller was penalised for obstruction in the build-up.

The home side continued to attack and were rewarded in the 32nd minute when Wright crossed for their opening try after gathering a pass from Miller deep inside Force territory.

Just before the interval, the Brumbies launched an attack from a scrum inside the Force’s 22 and their inside backs did well to create space for Banks, who beat two defenders before crashing over to give his side a 10-7 lead at half-time.

The Brumbies came out with plenty of intent after the restart and extended their lead in the 51st minute when Miller crossed in the left-hand corner after gathering an excellent long pass from Nic White.

That score did not deter the visitors, however, who upped the ante on attack and were rewarded five minutes later when Lance scored his try after attacking the line deep inside the Brumbies 22.

That meant the match was evenly poised with the Brumbies leading 17-14 but they went further ahead when Ikitau crossed the whitewash from close quarters in the 65th minute, after another well-timed offload from White.

The last 10 minutes were all Brumbies as they went in search of a bonus point, which they secured when Muirhead dived onto the bouncing ball behind the Force’s try-line after a neat grubber kick from Irae Simone. 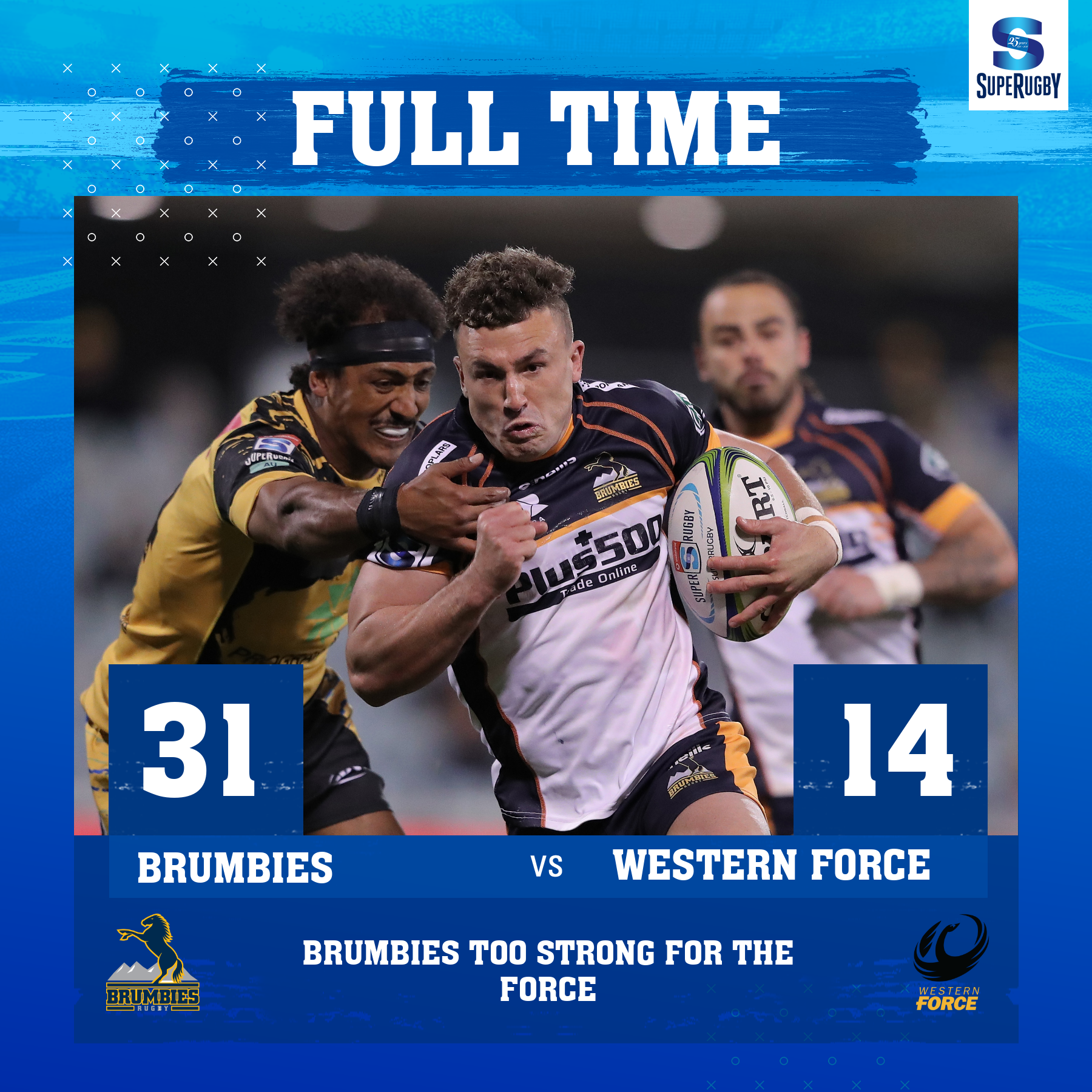