Force hold on to landmark victory over Waratahs

The Western Force managed to grind out a 16-20 Super Rugby AU win over the Waratahs despite finishing with 14 men.

The Waratahs will rue a poor second-half performance in front of their home crowd, while an elated Force contingent were all smiles after the final whistle of a high-quality affair.

In a positive move, an early penalty saw Waratahs flyhalf Will Harrison put a kickable penalty over the touchline to set up a lineout attack. The ensuing driving maul was executed perfectly, sending hooker Dave Porecki over the whitewash for the try.

At the 14 minute mark, ill-discipline at the breakdown let the Force down and gave Harrison a chance to extend the lead to ten points and he made no mistake.

The Force enjoyed 14 phases on attack in midfield, but the Waratahs defence showed good line speed and tackle accuracy to keep them pegged back, eventually forcing Harrison to kick, but it was charged down by Jack Dempsey. Force fullback Rob Kearney only just managed to clean up deep in his own half, with Argentine scrumhalf Tomas Cubelli clearing.

The Force had a chance from 5m out after the Waratah forwards defused their lineout drive. But good defence earned a turnover, a huge downfield kick and then a penalty at the breakdown with Carlo Tizzano competing for the ball. Harrison obliged to make in 13-0 as the Force players pontificated with hands on their hips.

A rare visit to the Waratahs 22m resulted in hooker Feleti Kaitu'u cashing over the line but failing to get the ball down, resulting in a goal-line dropout.

The Force finally scored a great try thanks to some magic from local Sevens star Tim Antsee. The rangy flanker burst through the staunch Waratahs defence and showed great pace to eventually offload to lock Fergus Lee-Warner, who ran a good support line and crashed over the whitewash. Jake McIntyre added the extras and then popped a penalty over, reducing the deficit to three in the dying embers of the opening half. The players went down the tunnel with a scoreline at 13-10.

The Waratahs had the first bite at the cherry in the second stanza, with the rolling maul again paying dividends. But a charging Porecki - hunting for a double - would knock the ball on just before the line, letting the Force off the hook.

Minutes later at the other end of the park, sustained pressure on the Waratahs defence would result in a 5m lineout. With the Waratahs clearly prepared for a drive, the Force executed a superb move at the back of the lineout that saw that man Antsee sneak the ball over the line. McIntyre split the uprights with the conversion to give the visitors a four-point lead in the 54th minute.

Replacement hooker Andrew Ready would then let down the Force by getting involved an off-the-ball scuffle where he threw a short arm punch. Referee Nic Berry had little choice but to issue a straight red card, sending Ready to the naughty chair for the remainder of the fixture.

With a man down, the Force were content to play for territory. But the Waratahs kept running at them and would eventually earn an offside penalty, which Harrison snuck past the right-hand upright to make it a one-point ballgame with seven minutes to play.

It was a helter-skelter affair that followed, resulting in the Force forwards earning a crucial scrum penalty. Replacement flyhalf Ian Prior pushed their advantage out to four points and despite a spirited 15 phase effort that took the Waratahs up to within ten metres of the try line, the Force managed to hold on for their first win since 2017. 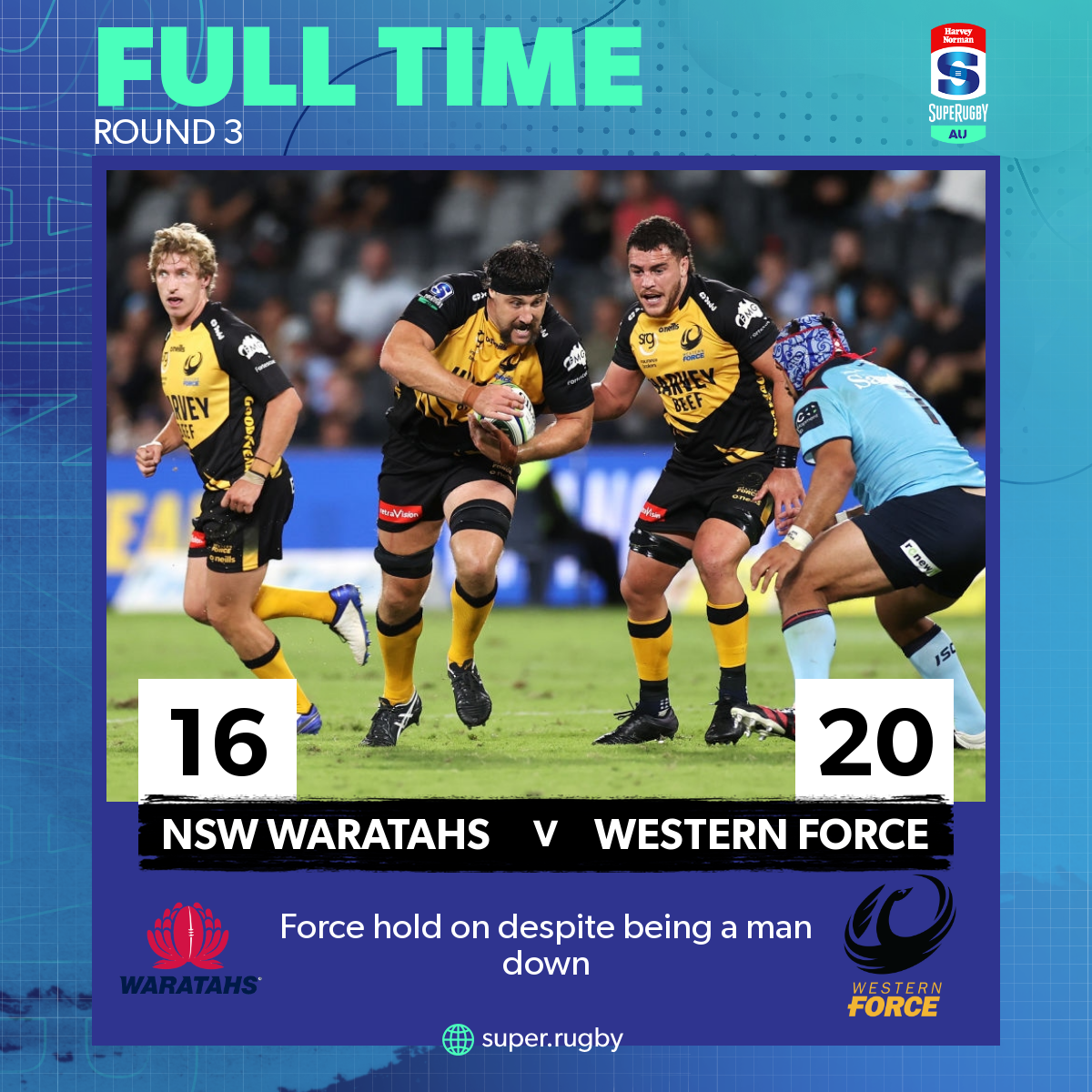