The Force got their first win of the season after defeating the Reds 22-6 in a dour affair in Brisbane on Saturday.

The Reds and Force finished 13th and 15th in last year's competition and judging from their respective performances in this encounter they will be struggling again this year.

Neither side were able to build any momentum in a game punctuated by several knock-ons and schoolboy errors and we had to wait until the 80th minute for the only try scored by Luke Morahan.

There was little enterprising play in the opening half with the most exciting moment coming in the 13th minute when Alby Mathewson pounced on a mistake behind the Reds' tryline but the television match official ruled that he didn't ground the ball properly behind the whitewash.

Earlier, Jono Lance had opened the scoring in the fourth minute with a penalty but the next minutes only came 30 minutes later when Ayumu Goromaru drew the hosts level from the kicking tee.

Lance then punished two indiscretions from the Reds at the breakdown with further penalties which meant the Force held a slender 9-3 lead at the interval.

The slugfest continued in the second half with neither side capable to take control of proceedings. Both sides continued to conced penalties and Lance slotted his fourth penalty in the 50th minute after the Reds were punished for offside play on defence.

Goromaru had a chance to reduce the deficit from the kicking tee in the 63rd minute but his effort struck an upright but he made amends shortly afterwards when he landed a penalty from close range five minutes later.

That was the last time the home side would score points but Lance added his fifth penalty in the 73rd minute which gave the Force a 15-6 lead.

The match was slipping away from the Reds but they didn't show any creativity on attack to narrow the gap. With time running out on the clock, the Force attacked inside the Reds' 22 and Lance caught the defence napping when he stabbed a grubber kick through which Morahan gathered before crossing for the only try of the match which also sealed his side's win. 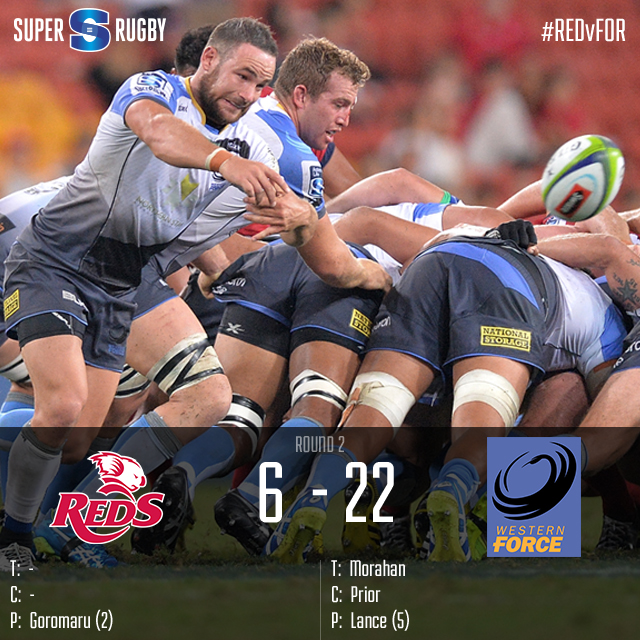