The Western Force secured an unlikely 16-15 victory over the Rebels at AAMI Park on Saturday, as the Rebels were made to pay the ultimate price for their lack of killer instinct.

The Rebels dominated territory and possession for the overwhelming majority of the match and put themselves in countless positions to score, but they couldn't find the final pass when they needed it most and were ultimately kept try-less by a heroic defensive effort from the Force, who trailing by six points with just minutes to play were given a rare opportunity to attack in the Rebels 22 and grabbed it with both hands to score the winning try.

The victory means the battle for third and a place in the Super Rugby AU semi-final remains very much alive, with the Rebels now leading the Force by just one point after their narrow one-point defeat.

The Rebels took the lead as early as the second minute when they were awarded a penalty near the halfway line and Reece Hodge nailed a monster kick from 50 metres out.

The hosts dominated in the opening minutes and piled on the pressure in Force territory - albeit without much reward - a pattern that would continue for the rest of the match.

The Force slowly found their feet in the match and started applying some pressure of their own, particularly at scrum time, but it was the Rebels who were given another shot at goal in the 13th minute for a breakdown infringement, with Matt Toomua stepping up on this occasion and making no mistake.

Moments later, the Force did get their first opportunity to strike back when Robert Leota fell foul of the referee's whistle, with Domingo Miotti converting from right in front to get his side on the board.

The Rebels were still doing most of the running but continued to lack the finishing touch when they got near the Force tryline. An attack that lasted 12 phases and got them within striking distance came to nothing when Leota knocked on near the touchline.

Instead, the Rebels had to continue relying on Force errors to add to their tally, with Toomua stretching their lead to six points after another infringement in a kickable position. The flyhalf nearly added another three-pointer shortly after but this time his effort hit the upright.

Shortly before the half-hour mark, the referee lost his patience with the Force and sent Kane Koteka to the bin for not using his arms in the tackle, although it was the accumulation of penalties that resulted in the yellow card.

Ironically, the card seemed to lift the Force - not the Rebels - and they very nearly scored after a rare foray into Rebels territory, ultimately taking the three points on offer instead.

The Force gave the points back almost immediately, however, when they conceded a penalty at the breakdown and then got marched 10 metres further back after giving the referee an earful.

A great break from scrumhalf Joe Powell shortly before half-time saw the Rebels come desperately close to getting the opening try, but again they couldn't find a way through.

It was a similar story early in the second half, as a clean burst through the middle from big lock Trevor Hosea nearly got the Rebels over the line only for the chance to go begging when - not for the first time in the match - a long, looping pass out wide couldn't find its intended target.

The scrum continued to be a weapon for the Force, and after managing to repel several more Rebels attacks, they reduced the deficit to three points when Miotti slotted his third penalty of the night following another powerful shove.

Just before the hour-mark, the Rebels pulled off their slickest backline move of the evening to free up Marika Koroibete on the outside, but the big man was brought down and possession was turned over via a tiny knock-on at the breakdown.

A few minutes later, Toomua was handed another shot at goal when the Force strayed offside and converted to take the Rebels' lead back out to six. That would be the flyhalf's last contribution of the night, however, as a head-to-head clash not long after forced him off the field.

With 10 minutes to play, Miotti had a chance to get the Force back to within three. The kick was wide, but the Force went back on the attack and this time they opted for a five-metre line-out rather than take the points on offer. The ensuing rolling maul had plenty of momentum and took them all the way over the line for the first try of the match, with substitute Tim Anstee coming up with the ball. Miotti added the extras as the Force took a one-point lead with just minutes to go.

The match finished in extraordinary fashion when the Force managed to thwart a last-ditch attacking effort from the Rebels and turn over possession, only to make a hash of the kick into touch and hand possession back to the Rebels. Back came the home side in a desperate bid to overturn the deficit, but the Force defence stood firm as it had done all match, with play finally coming to a close when Hodge attempted a winning drop-goal that never looked like going over. 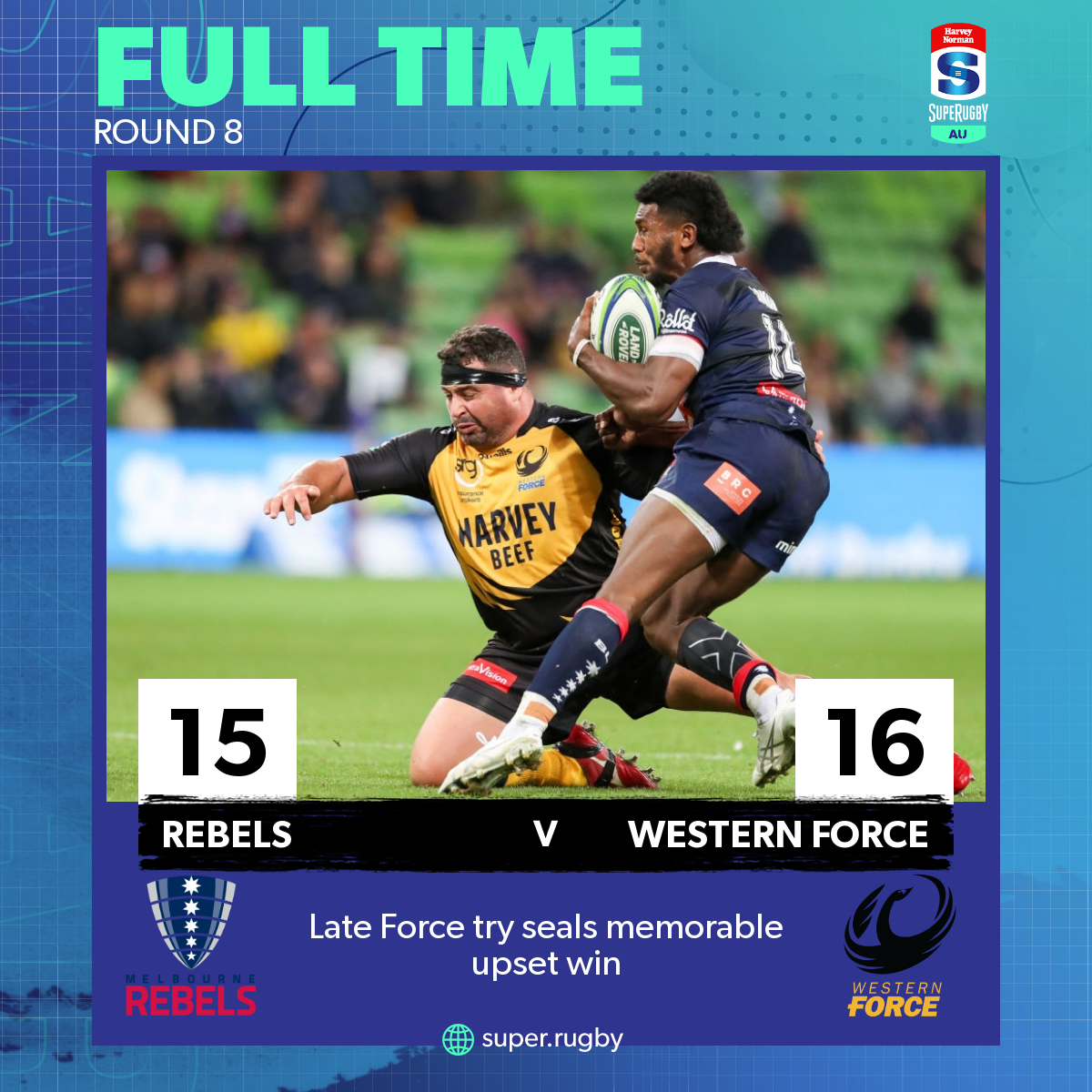