The Force pulled away in the second half to record a 31-22 victory over the Rebels at nib Stadium in Perth.

Tries from Bill Meakes, Adam Coleman, Richard Hardwick and Chance Peni proved too much for the Rebels who scored through Colby Fainga’a and a Marika Koroibete brace.

The Force move on to 22 points in the Australian conference and leapfrog the Waratahs in to third position while the Rebels remain rooted to the bottom of the table.

Having lost to the Rebels on the last two meetings between the sides, the Force will be happy to come away with the bragging rights.

It was a passionate encounter as both sides were desperate to prove they were not worthy of the Super Rugby axe when Australia’s big bosses choose at the end of the month between the two sides which should be cut from next year.

It was an eventful opening ten minutes of a feisty Aussie derby. Reece Hodge gave the visitors the lead with a penalty before Force winger Peni was yellow-carded for a shoulder charge on Rebels lock Steve Cummins.

Only minutes after going down to fourteen men, the Force scored a superb set-piece move. Hardwick took the ball from the back of their lineout and passed inside to Michael Ruru who made the break before assisting Meakes who had a clear run to the line. Peter Grant slotted the conversion as the Force took a 7-3 lead.

The Rebels hit back with an even better try which started near their own line. Mafi received the ball and saw a gap and made good ground. He then offloaded to Koroibete, who sprinted from near halfway to score.

Hodge added the extras before Grant missed a rare penalty. Coleman then powered over for the Force from close range after a few short carries as they regained the lead.

But Koroibete had the last laugh of an exciting first-half. Hodge broke the line and offloaded well. Jackson Garden-Bachop then got involved and the ball found its way to Koroibete who scored his second try.

Grant slotted a penalty shortly after the resumption of the second half as the lead switched hands once again.

And they extended their lead with a try similar to Coleman’s, where the forwards took the ball up with a few short carries before Hardwick did well to spin out of the tackle and power over from close range. Good composure was shown by the Force attack and Grant added the extras as they took a 24-15 lead on the 50-minute mark.

Soon after, the Force scored their fourth after more good build-up play. Dane Haylett-Petty showed a great long pass to find Peni on the overlap as he stepped inside Koroibete to produce a clinical finish. Grant nailed the extra two to take them above the 30-point mark.

After winning a penalty five metres out, the Rebels decided to run it with Garden-Bachop turning provider as he delayed his pass perfectly to send Fainga’a over the whitewash to cut the deficit back to nine at 31-22. And that’s how it remained. 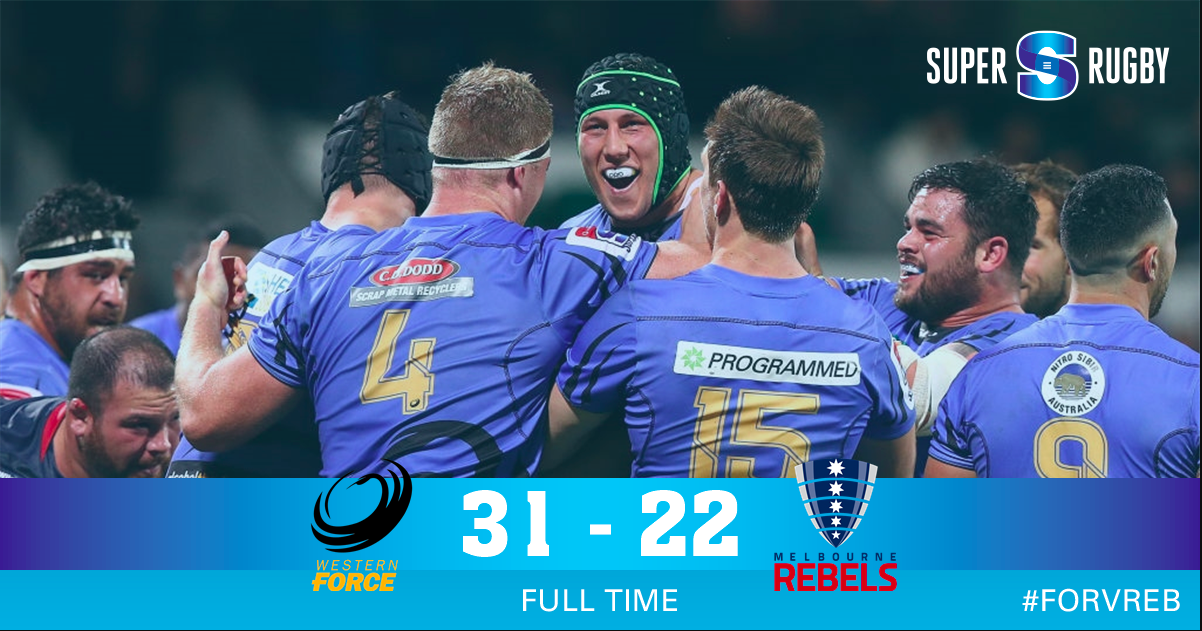