The Brumbies produced a superb Super Rugby performance to overcome the Hurricanes 24-12 at the GIO Stadium in Canberra.

The Wellington-based outfit struggled to find their rhythm throughout but they managed to go into the break 12-5 in front thanks to tries from TJ Perenara and Julian Savea.

Kyle Godwin provided the home team’s response in the first half before Folau Fainga’a levelled matters early in the second period. The Canberra outfit had the momentum and Rory Arnold took them into the lead heading into the final quarter.

Despite having a couple of dangerous moments on the counter-attack, the visitors struggled and Andrew Muirhead confirmed the result three minutes from time.

The play-offs are still highly unlikely for the Brumbies but they impressively took advantage of the Canes’ absentees.

Chris Boyd went into the game without some key players, with Brad Shields, Ardie Savea and Beauden Barrett all not involved, but one of their internationals showed his quality in scoring the first try.

Dan McKellar’s side had a lineout on their own line and won it at the front, but Perenara displayed tremendous nous to intercept and touch down.

To their credit, the Brumbies hit back after the visitors conceded a couple of needless penalties. They duly built pressure and, when they had committed enough defenders, play was shifted wide for Godwin to cross the whitewash.

Back came the Hurricanes, however, as they also managed to open space on the outside and Savea was on hand to beat the covering Joe Powell and power over.

The Australians almost responded through Isi Naisarani but he was unable to get the ball over and they went into the interval seven points in arrears.

Unperturbed, McKellar’s charges simply increased the intensity in the second period and deservedly levelled the match when Fainga’a burrowed across the line from close range.

Although the Canes attempted to respond, with Nehe Milner-Skudder producing a couple of neat touches, the Brumbies were the more incisive and soon scored their third try. Once again, they took the direct route and Arnold showed excellent strength to shrug off the attempted tackles to finish.

Matters worsened for the visitors when referee Nick Briant yellow carded Blade Thomson for a high tackle seconds after coming on, but they handled the 10 minutes well.

The hosts maintained their control on the encounter, though, as the New Zealanders struggled to gain a foothold in the game. McKellar’s men duly had a couple of clear cut chances to secure the victory but both Godwin and Muirhead were denied by superb last-ditch defence.

It did not matter, however, as the wing made up for missing the earlier opportunity by going over unopposed in the final few minutes. 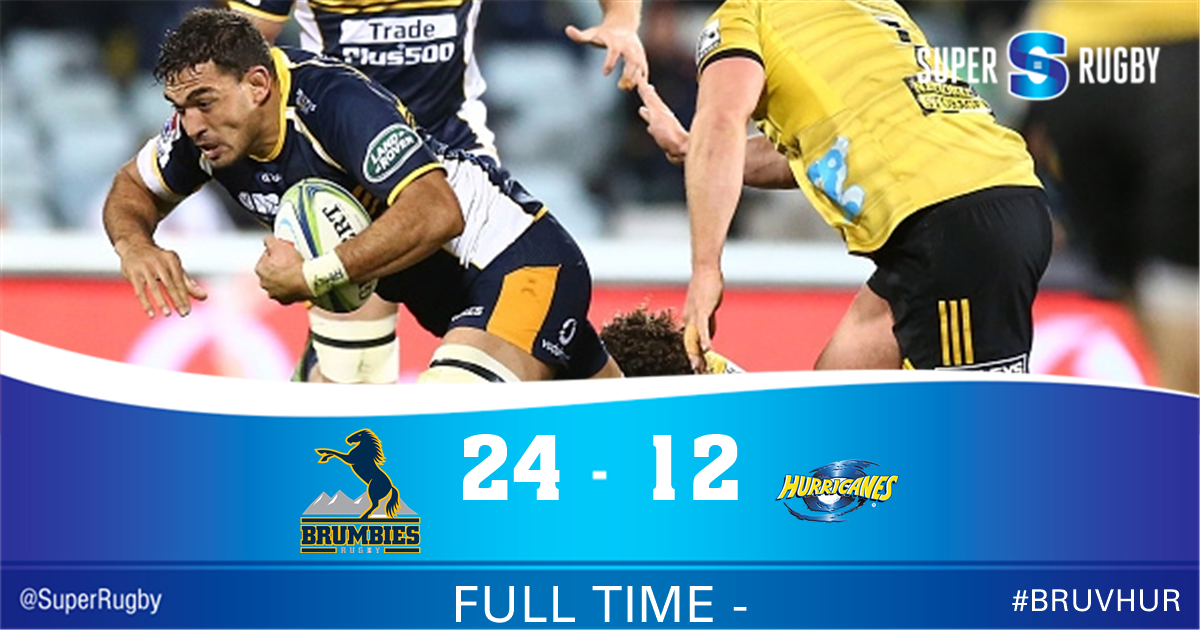