Ngani Laumape scored four tries as the Hurricanes claimed a 42-24 win over the Blues in their New Zealand derby in Wellington.

The All Blacks inside centre delivered a superb attacking display and scored a brace of tries in each half which helped set up his side's first triumph in four matches.

Twenty three points separated these teams in the standings before the start of the match and it showed during the early stages which the Hurricanes dominated before the Blues launched a brave fightback.

The home side's class shone through in the end, however, and they eventually outscored the Blues by six tries to three.

The Blues were fastest out of the blocks and took a 3-0 lead in the sixth minute courtesy of a Stephen Perofeta penalty after Sam Henwood infringed at a ruck.

The Hurricanes did not take long to respond and in the 13th minute Laumape beat a couple of defenders with a powerful run before offloading to Julian Savea, who crossed for the opening try.

Jordie Barrett's conversion gave the Hurricanes a 7-3 lead and 10 minutes later the hosts went further ahead when Laumape ran onto a pass from Nehe Milner-Skudder on the Blues' 10-metre line before slicing through the visitors' defence again on his way over the tryline.

The Hurricanes, and Laumape in particular, continued to dominate and in the 36th minute he collected a pass from TJ Perenara deep inside the Blues' 22 and bumped off three defenders before scoring his second try.

The Blues would finish the half stronger though and two minutes later Rieko Ioane beat three defenders before crossing for his side's opening try. Perofeta slotted the conversion which meant the Hurricanes led 21-10 at half-time.

The visitors continued to hold the upperhand after the interval and seven minutes into the second half Rieko Ioane went over for his second try after Perofeta was stopped just short of the whitewash in the build-up.

The Hurricanes struck back in the 54th minute when Beauden Barrett exploited a gap in the Blues defence before dotting down with the conversion from his brother, Jordie, giving the hosts a 28-17 lead.

That did not deter the Blues though and after setting up some phases inside the Hurricanes' 22, Akira Ioane dotted down to give his side a glimmer of hope. Perofeta added the extras but that would be the last time the men from Auckland would trouble the scoreboard as the Hurricanes dominated the closing stages.

Laumape was at the centre of it all and he was rewarded with his hat-trick in the 69th minute after the ball went through several pairs of hands in the build-up.

And three minutes later, the Hurricanes combined brilliantly again with Laumape poweringd his way over the tryline in trademark fashion to seal a deserved win for his side. 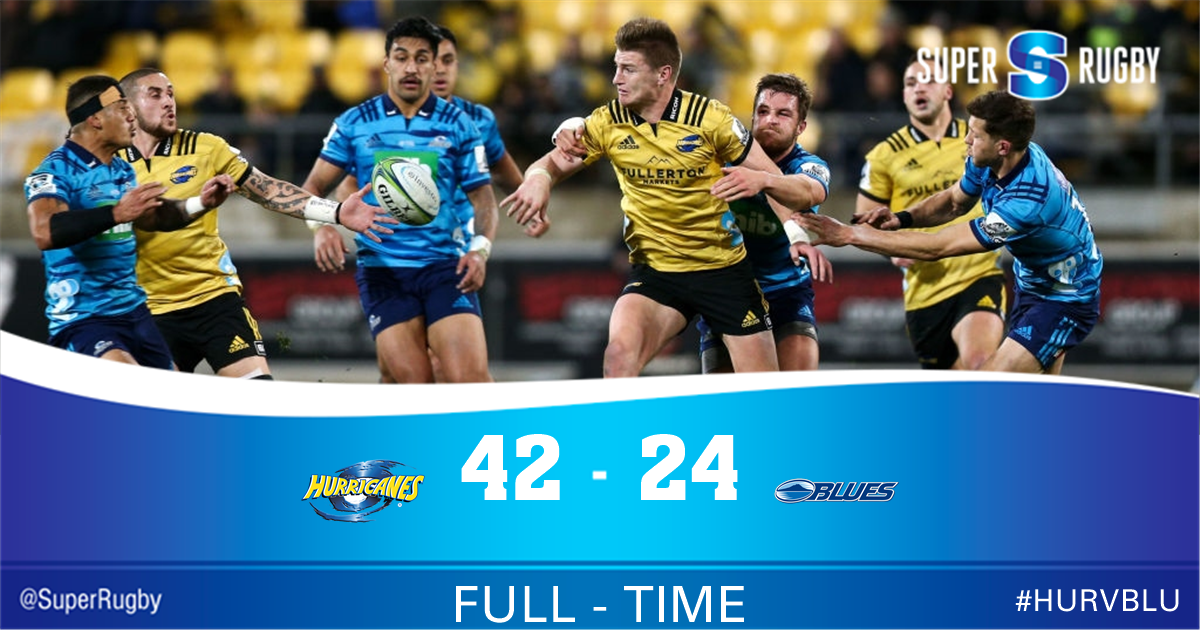